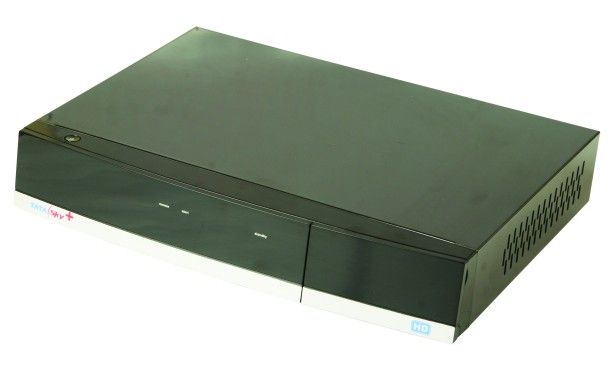 This review of the Tata Sky HD is part of a shootout of all high-definition direct to home service providers in India. Find the final verdict there. Other players include:

The layout of the remote control is the best we have seen among all the service providers. It has large distinctly shaped buttons for certain functions, so you can blindly operate the remote control. Placement of buttons is also well thought out, with the four-way arrow buttons in the centre, surrounded by volume and channel controllers. There are direct shortcut buttons for Guide, Showcase, Organiser and Active services. Sadly, it’s not a universal remote.

Guide brings up a list of genres to ease the channel selection. You can simply select a genre and you will be shown a row which will show five channels along with the program guide. Reminders can be set and a program can be assigned to be recorded, after entering information.

The DVR on Tata Sky HD has a 500GB hard disk which allows you to record 600 hours of TV programming. You can record two channels at a time, but will have to watch the second channel as it will not allow you to change channels. You can watch a recorded show while two channels are recording.

You can also enter the time from which you want to playback your recorded material which is great if you have recorded long duration content, but missed only the latter half. Along with recording, it offers an option called Series Link which allows you to record your favourite show every time it airs, although its implementation is still dicey with some shows being dropped from being recorded randomly.

[RELATED_ARTICLE]Tata Sky gives you the option to add 50 favourite channels, but it can be added under one profile only. So say you are a sports fanatic and set all the sports channels as favourites, then another member in your family will have to use this same profile and add their favourite channels after yours. Another interesting aspect is the buffering of the present channel content. You can replay a particular scene by pressing rewind. Once you change the channel, the buffer is lost. You can also record upto 30 mins before and after the scheduled record.

Tata Sky HD is currently the only service offering only true high definition channels and not upscaled ones. The picture quality on the 47-inch screen we were testing it on was flawless. Although standard definition content went for a toss. We tried changing the aspect ratio to 4:3, which improved the quality marginally. Quality of the Active Services was not so great as there was a lot of pixelation on our 47-inch screen, which kills the whole experience.