Spider Designs Skull Review: This one’s only for the looks 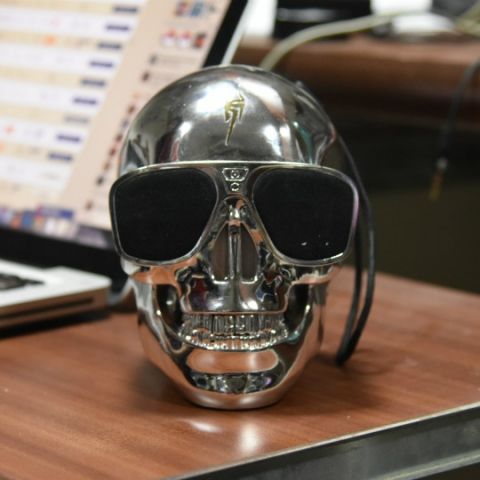 The Spider Designs Skull deserves to be bought because of its novelty, and not its outright audio output. The 2x4.5W drivers are mediocre at best, and any serious music enthusiast will find it somewhat disappointing. Alongside, for a price of Rs. 2,999, the likes of Logitech X50 and X300 are way better than the Skull. Nevertheless, if you are looking to pick up a speaker that deceives in terms of looks, you may consider it if casual listening is all you do. Otherwise, you will need to look, err, hear elsewhere.

The Spider Designs Skull is a novelty, and that is made clear from the very start. The shiny skull speaker with grilles in place of eyeholes, the speaker unit at the back and the rest of the controls make for engaging looks, and as my colleague Sameer Mitha put it, “This one is ideal for Hallowe’en music.”

Nevertheless, since the device proclaims itself to be a speaker, it calls for a complete review, and this is what the Skull is about.

Build and Design
The Spider Designs Skull is a very specific-looking device, and whether you would like it or not depends completely on your perspective and taste. It is made entirely of plastic, and the build quality is not the best around. However, it does look good enough for a skull with an added dash of bling, grooving to Gypsy Jazz. The plastic exterior is rather shiny, and that may work for its rather extravagant looks.

The exterior detailing is good, which makes the device a nice gift, or even a novel possession. Upon falling from a height of about three feet, the speaker grille from the back fell off – not a good thing if you end up handling the speaker roughly. The grille is plastic, with a mesh covering it, and the parts feel distinctly inexpensive. The front of the Skull has two tweeter outs, which act as bass ducts, but are actually too weak to impact the overall audio. The power button is placed in between the two goggle-shaped speakers, and a tiny LED light underneath the button relays power and connectivity confirmation. The Spider Designs Skull also notifies of power on and connectivity status via audio response, which is handy, seeing that the LED notification is too inconspicuous to be clearly visible. The power on audio alert is actually entertaining, and lends character to the design of the Skull, with the iconic laughter from Michael Jackson’s Thriller serving as the tone. 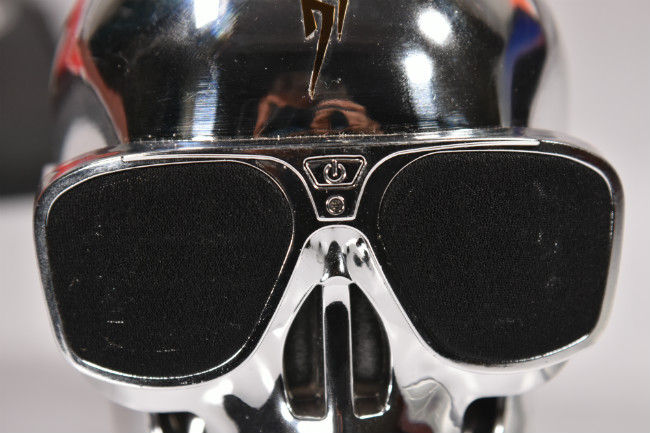 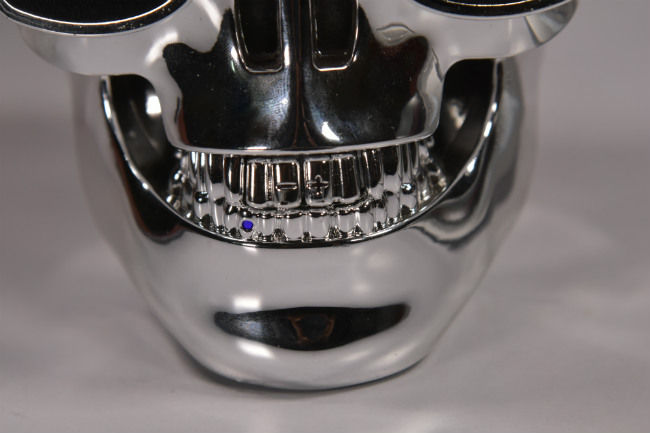 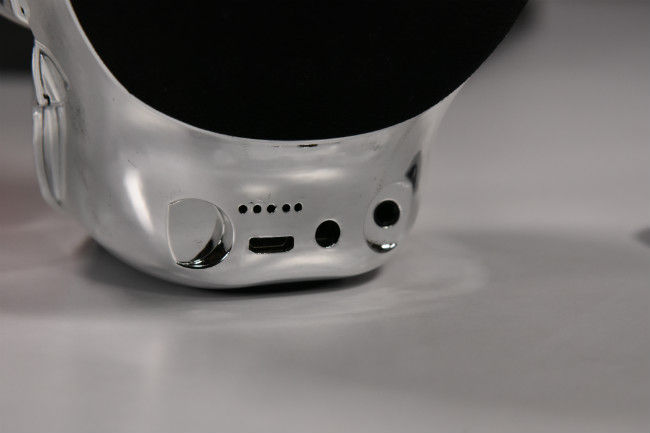 The array of shining teeth on the skull has two middle buttons which are marked as volume up and down, but do not really function so. While the volume down button only functioned as a back/rewind button, the volume up button functioned as next/forward, and long pressing it paused the tracks that were playing. In all probability this was a singular device flaw, but not having on-device volume control is a major defect. Button feedback is not great, either, and the Skull is only passable, seeing that its major focus is not on hardcore audio performance.

Audio, Battery and Connectivity
While I have already spoken about how the Skull is not for the best audio quality, it is not unbearable either. The Spider Designs Skull is amply loud, which is its main lookout. There’s distortion across most tracks, and presumably, the Skull does not pack in the best audio driver. The rear-facing speaker is well-placed, and aids the Skull in sounding louder. There is a definite bias towards the highs, and the mids are not entirely absent. Bass frequencies, however, are very subdued. For instance, when you listen to Welcome to the Black Parade by My Chemical Romance, you will make out the drum rolls over the chants towards the end of the song. Unfortunately, the clarity of the drum rolls are absent, and the entire track is treble-driven. This is practically the story with every track you play, as a result of which tracks by artists like Skrillex sound particularly shrill. 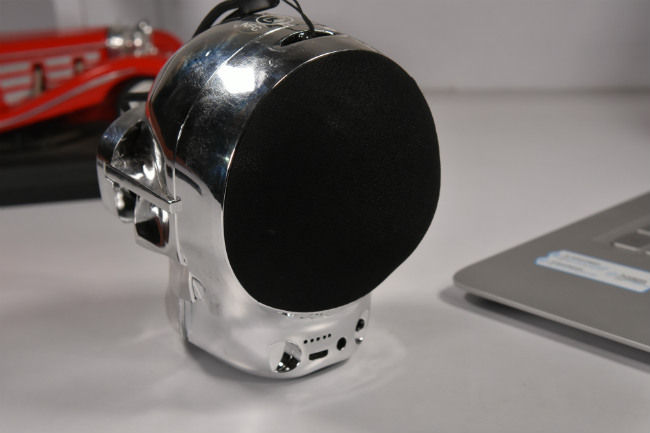 Soundstaging is just about average, and audio is not as wholesome as you would like your speaker to sound, at home. While the rear-facing speakers somewhat make audio sound slightly more wholesome, it still sounds flat, and the Skull misses the warmth that tracks like Oh! Sweet Nuthin’ by The Velvet Underground inherently bring. The Skull is good for light, casual listening without major emphasis on quality of audio. Its connectivity range is not supreme, and the Spider Designs Skull can retain Bluetooth connectivity till only about 15 feet, within furniture interference. On open ground, it stretches to a maximum of 18 feet.

While it does retain partial connection till 15 feet, Bluetooth connection started falling just about 8 feet from the source, which is not ideal for a device of the Skull’s nature. As for battery life, continuous playback saw the speaker last for nearly 6 hours, which is decent and should see you through one night of partying. It is not great, but it will see you through. The Skull charges really fast, though, and after about 15 minutes of charging from 0% battery, I was able to play music for nearly 1 hour 30 minutes. This is a good aspect about the Spider Designs Skull.

Bottomline
The Spider Designs Skull deserves to be bought because of its novelty, and not its outright audio output. The 2x4.5W drivers are mediocre at best, and any serious music enthusiast will find it somewhat disappointing. Alongside, for a price of Rs. 2,999, the likes of Logitech X50 and X300 are way better than the Skull. Nevertheless, if you are looking to pick up a speaker that deceives in terms of looks, you may consider it if casual listening is all you do. Otherwise, you will need to look, err, hear elsewhere.