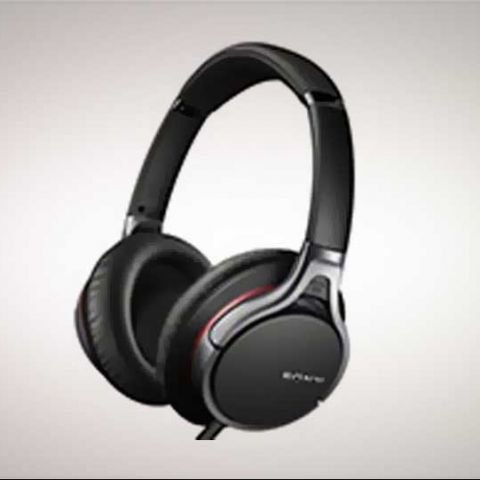 This is clearly a case of an impressive beginning, and then things not carrying forward from there. We always clarify that any reviews related to sound are extremely subjective, and in the case of the MDR-10RNC, there are some positives and equally some negatives. The snug fit itself cancels a considerable amount of noise, and the additional NC benefit is an incremental benefit. Sony's MDR headphones have always had a bias towards bass, but in this case, the bass isn't overpowering. There is good vocal clarity for the most part, but there are times when the mids and the highs tend to lack definition.

Just recently, Sony bought in the MDR-XB series of headphones to India, and not much later, the range has been updated with the noise canceling MDR-10RNC cans. We take them for a spin, to see if they are worth the money.

Build & Design
Sony has maintained similar design elements in the entire MDR range of headphones. The mix of a black coloured base, a dash of red and some metal elements means this doesn’t look as docile as some Sennheiser headphones, and neither as flashy as some Beats Audio cans. The headband and earpads are well cushioned with the black coloured leather. This is a massive change from the Alcantra material that Sennheiser used with the Momentum series of headphones. Despite the slightly thicker material, the MDR-10RNC feel light and comfortable throughout long listening sessions. And this comes from someone who is extremely uncomfortable if the earphones are pressing down on the ear for a long duration. Admittedly, the Momentum On-Ear’s Alcantra material allows the ears to breathe a bit more, but the bigger earcups on the MDR-10 means the stress on the ears is much lesser.

On the bottom panel of the left earcup is the power switch for noise cancellation, with an AINC button next to it. This can be used to switch between noise cancellation modes - we will explain that in the performance section. A recent change that is being noticed with noise cancellation headphones is their ability to work in passive mode, with the Bose OC20i being one of the recent earphone launches that allows usage even after the battery may have run down. On the same lines, the MDR-10RNC can be used in passive mode without switching on the power mode. In a nutshell, the MDR-10RNC can be used as a normal headphone, either when the battery may have run down or you don’t need noise cancelling.

The left ear also holds the 3.5mm audio jack for the included two cables. One cable has no phone controls, and the other features an inline, single-button remote control. It's good that a replacement cable is offered as a part of the package, and the detachable cable adds to the MDR-10RNC’s longevity, since in case of cable damage, you won’t have to spend on a new headphone. A simple plug out and plug in will suffice. Also, a part of the package is the airline jack adapter, which is infinitely convenient and helpful.

The right earcup is where the AAA battery compartment is located. While this method does have its advantages of allowing you to immediately swap the battery once one runs down, but a rechargeable one would have been equally easier to deploy.

Performance
Between the powered mode and the passive mode, there is considerable change in the sound characteristics of this headphone, the primary reason being the volume drop off that you will notice when turning off the power. This means, both ends of the spectrum feel a lot more subdued, without the requisite volume increase. But, once things are equalized, the sound characteristics don’t change.

Sony’s MDR headphones always appeal to the bass lovers. However, while that is brilliant, it is disappointing that the mids and highs tend to not have the definition you would expect, in certain cases.

The proof of the presence of the low frequencies is proved by Knife’s Silent Shout and around 5:25 minutes during the interlude in What Goes Around by Justin Timberlake. Jay-Z and Kanye West's, No Church in the Wild, is another example of excellent bass and low-mids, but the vocals seem muddled and bereft of crispness. If you are listening to lot of techno and trance tracks, the MDR-10RNC would do a fantastic job. But, Summer Love by Justin Timberlake just doesn’t sound crisp enough and Kesha and Pitbull don’t sound beautiful and powerful, respectively, in their new duet effort, Timber.

Pink Floyd - Time is the best example that shows these cans do not have a wide soundstage. However, critical to note that the layers aren’t muddled, with each element getting its own time under the sun. One surprising thing that emerges is that tracks that have been recorded with a focus on mids and highs seem to suit the MDR-10RNC better. Another example is I don’t want to be (Live), by Gavin DeGraw that sounds brilliant for a live recording. After determining that these headphones are good for bass heavy tracks, we have also determined that classics and originally vocal focused tracks will do well on these cans.

Moving away from the sound, and talking about the experience, there are some blanks that haven’t been filled. The single button on the in-line remote is extremely limited. First, you need to wrap your head around the fact that multiple clicks of the button will change tracks, but not on all devices. There is no volume control, but the button will play and pause playback and answer calls when connected to a smartphone.

Sony rates the MDR-10RNC's battery life up to 20 hours, but this will depend on the the usage load and will vary from person to person. Surprisingly, there is no auto shutdown of the noise canceling feature, which kicks in after a period of inactivity. Basically, you have to remember to turn these headphones off, or the battery life will be significantly lower for actual play time.

If you remember, we had talked about the automatic noise cancellation analysis feature. This neatly brings us to the AINC button, which sits next to the power key. To make it simpler to understand, AINC actually means Artificial Intelligence Noise Cancellation. Basically, three modes - for aircraft, trains or buses, or for general outdoors or indoors use. By default, when you switch on NC, it is in the aircraft mode. Clicking the AINC button lets you switch between these modes, and these make a significant difference, irrespective of the volume or music.

Any direct comparison with the Bose Quiet Comfort 20i would be an apples to oranges scenario, since the QC are in-ear noise canceling earphones. But, the quality of NC is definitely more audible in the Bose, simply because they are in-ear headphones. If you remember, we have already mentioned that the snug fit of the MDR-10RNC means a lot of noise is already blocked out, which means there is less of a difference when the NC is turned on. But it doesn’t mean that the cancellation is weak.

To buy or not to buy?
It's quite clear that the Sony MDR-10RNC are meant for an audience that prefers bass heavy stuff. Vocals are a tad weak on these cans, on certain tracks. But, again, if you listen to a lot of classics, chances are most tracks will sound fine. Buying or not buying these headphones will depend on what you listen to. Trance? Yes. Classic rock? Yes. Pop? No. Rap / Hip-Hop? No. We hope this makes the buying decision a tad simpler!