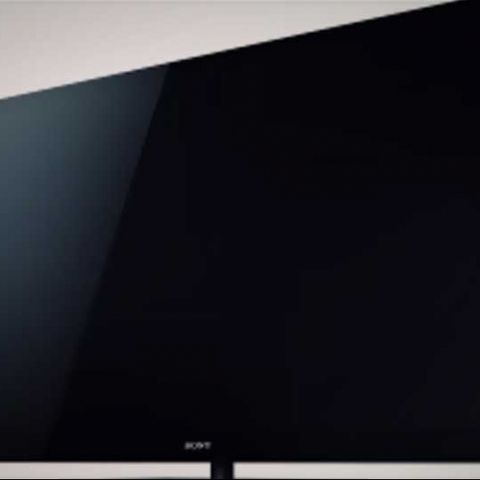 With the HX925, Sony has made a solid bid for a share of the LED television market. The 3D content looks very good, be it native 3D or even the up-converted one. The redone menu is quite funky. However, the biggest letdown is the reflective nature of the display - any spec of light in the V arc will be reflected off it. If you are spending this much money, you may also want to consider the Series 7 LED from Samsung.

Samsung, without a shadow of doubt, took the lead as far as the LED TV market is concerned. But Sony worked hard over the last one year, and we are sure about that because what we are witnessing here is a product that is just brilliant. Well, almost!

Look & Feel
Sony still hasn’t gotten the entire LED experience on track. Not as far as getting the slimness of the TV goes. The Bravia HX92 is 38mm thick, and we are only looking at the panel’s thickness and including the stand in the calculation. In contrast, the Samsung 7000 series LED is 30mm thick. Not that it really makes a huge difference, but clearly we know who has the bragging rights. 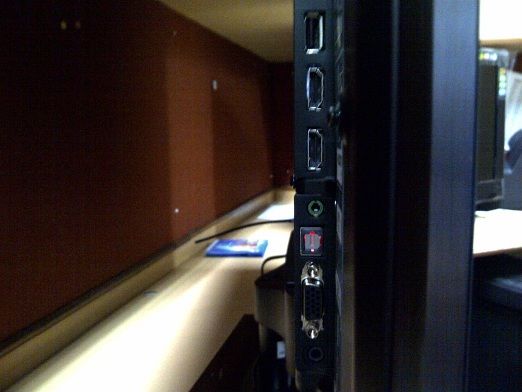 There are no ports on the side, since there is not enough width at all. But you will get 4 HDMI and 2 USB on the rear panel. The Bravia HX925 has a wide range of web functionality, and that is helped immensely along the way with the integrated Wi-Fi feature.

However, the real visual punch is at the front. When the TV is turned off, the display blends in very well with the bezel, and while it is not that, it almost looks like an edge-to-edge display. Switch it on, and the SONY logo under the display is illuminated in a pale white colour. Compare this with the looks of the Samsung 7000 Series LED, and it has a very slim bezel itself, which gives it an edge-to-edgeaura even when switched on.

The build quality is absolutely faultless, at first look. However, dig deeper and there are a lot of faults.For the cleanliness freaks amongst us, the headache will be the extremely glossy finish to the entire panel. It will gather a lot of dust, and even the slightest of scratches caused when wiping the dust off will be clearly visible. Secondly, a nudge, even by mistake, and the entire panel rocks backwards and forwards quite scarily, even though it is properly sitting on the table stand. We suggest wall mounting this if possible, since there is a huge risk of it getting nudged accidentally in a home environment.

We would also like to specify that what you get as standard with the TV is the basic table stand, just like any flat panel television. The eye catching Bunchin Stand with the built-in 2.1 channel speaker system will cost about Rs 14000 extra. And as far as basic stands go, the four-legged chrome stand that comes with the Samsung 7000 series LED looks different.

Visit the next page for a look at the Sony Bravia HX925's features, performance, and our verdict...

Features and Performance
The Bravia HX925 has a 1920x1080p HD OptiContrast panel with Corning Gorilla Glass. What we see for the first time on LED televisions is the X-Reality Pro picture engine, and the Bravia 3 engine seems to have been benched for the time being. Not really sure if and when we will see an LED range with an iteration of Bravia.

The moment we switched on the TV, the reflective nature of the display was very much evident. The glass reflects every single speck of light that may be anywhere in front of it. Quite clearly, the HX92 will not survive in a living room with all the ambient and natural light we usually associate with the living room or even the bedroom. Having said that, minimalist lighting on the ceiling or any amount of lighting in the V behind the TV will not cause any refection issue. 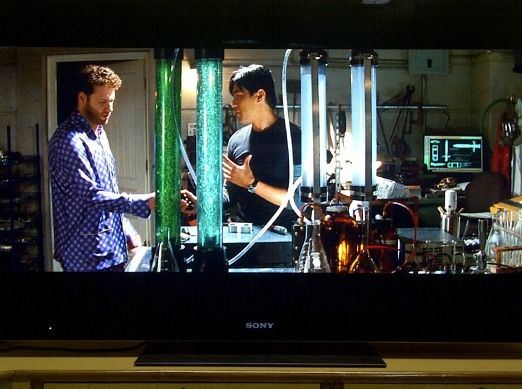 The box packing says MotionFlow XR800, but don’t assume for one second that it is an 800Hz panel. No, this one is a 200Hz panel, with LED backlighting. The technology allows the LEDs to be turned on and off much quicker, allowing for better contrast, deeper blacks, and helps simulate more video frames per second.

Fast moving scenes didn’t look good at all until we set the Fast motion setting to Super Smooth. No matter what setting we selected before this- clear or smooth, fast moving objects (birds flying etc.) did not feel real, and even suffered from momentary distortion.

Samsung and Sony also have feature called LED Fast Motion, but works a little differently on both TVs. With the same feature activated, the image of the Bravia doesn’t get changed in terms of brightness levels. On the Samsung though, switching it on reduces the brightness by 4 levels. While the LED Panel motion settings when activated makes watching movies a lot of fun, we must warn that it isn't recommended when watching normal TV. With this setting on, we could see 3 cricket balls zipping to the boundary rolling on the grass, with the centre one being the actual ball, and the other two as ghost images.

Satisfactory brightness and contrast levels made the visual experience that much better. There are a lot of other settings that you can tweak as well. Live Colour feature does add a lot of zing to the colours, but we suggest you keep this turned off. As was the case with previous iterations of this feature on the Bravia 3 engine, the reds tend to become overbearing.

With this television, you can even upscale 2D content to 3D. Clearly, the 3D Comb Filter seems to doing its job, because even with Noise Reduction and MPEG Noise Reduction turned off, there were no artifacts or edge disturbance around the articles on the display. Authentic 3D content, off a 3D Blu-ray looks absolutely stunning, and the depth is dependent on what angle and distance you are seated. Even upscaled content, from 2D to 3D was surprisingly deep. For upscaling, you can use either Side-By-Side 3D or Over Under 3D. Mostup-converted 3D movies come in the more popular Side-by-Side 3D format.

Two 3D glasses are provided as a part of the package. The depth of content and the colour even-ness was surprisingly good with the upscaled 3D content. However, since this is active 3D, you need to be in straight line with the TV! The 3D videos look extremely good, both in terms of depth as well as clarity of fast moving scenes. However, 3D still gives me a headache, and if does give you one too, take a break from time to time when watching 3D movies. 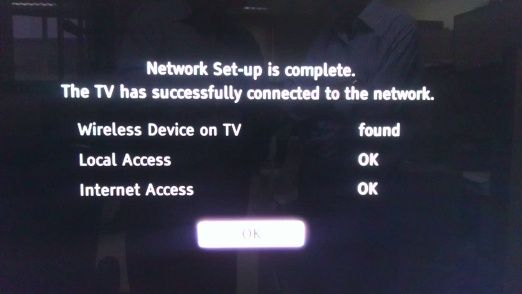 Setting up the web connectivity on this TV is a quick process. Plug in the LAN cable or use the Wireless route, and the TV will configure in less than a minute. At first configuration, the system update check will happen automatically, and you will be prompted to update in case a newer version is available. The download wasn’t very big - 14MB in this case. Post installation, the TV is supposed to restart itself. However, it didn’t in this case, and we were scared stiff! Manually switched it on, and the installation completed successfully. Whew!

The built-in web browser, You Tube app, Facebook, Twitter, widgets and Skype capabilities – this does really pack a few punches if you want web based content on the television. We were a tad disappointed by the limited variety of widgets at the moment. The HX925 also lets you chat on Skype. For video chats ambient lighting needs to be sufficient, else your face will be considerably darkened. For Skype, Sony bundles the CMU-BR 100 webcam with the TV. It sits nicely above the display, and does offer satisfactory video clarity once the lighting is adequate. Samsung’s SmartHub on the other hand offers access to a whole lot of apps, and if you have the AllShare PC software installed on a network connected PC, then you can access media files over the network and play back. Samsung and Sony both have DLNA capabilities allowing you to stream media, but the AllShare app just adds a lot of convenience usually not seen when you stream files individually.

The Sony Entertainment television app brings a whole host of clips from their range of television shows. This isn't Live TV, but the clips were quite new, some even as latest as 2 days old. The content on this app gets refreshed quite often. However, all videos were in the 4:3 format, probably because Sony Entertainment Channel isn't an HD channel yet, and their recordings aren’t in the 16:9 aspect ratio.

What particularly impressed us was the You Tube app. We had connected the HX925 via a particularly not very fast Wi-Fi, but the video streaming was literally buffer free. A 720p HD video buffered for 4 seconds and played the entire 12 minutes stutter free. If you happen to go back into the menu while watching a You Tube video, the video won’t pause. The small window will open up on one part of the screen that will keep the video playing. 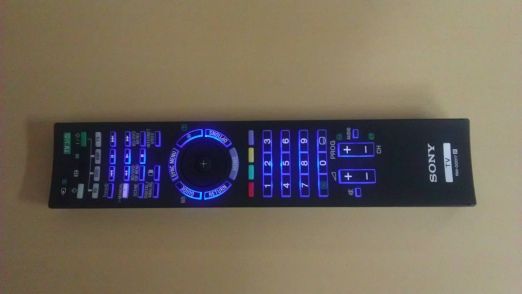 The backlit remote does help a lot, particularly if you are watching the TV in a dark room. Sony has taken the remote design from its previous Bravia range, and made some tweaks to it. What that has done is made the remote more complicated. Most of the keys have been clustered together around the direction keys, and you will press the wrong key if you aren’t looking.

Our Take
Sony has just taken the game to the next level with the HX925. 3D content looks very good. The redone user menu is quite funky. However, the biggest letdown is the reflective nature of the display - most of the light in the ambience will be reflected off it. If you fancy all the web-based goodies this TV brings, then this is the one you should consider. Or take a look its slightly lesser priced sibling – the NX720. Or check out the Samsung UA46D7000LM that costs as much as the Bravia HX925, but has a few extras going in its favour.