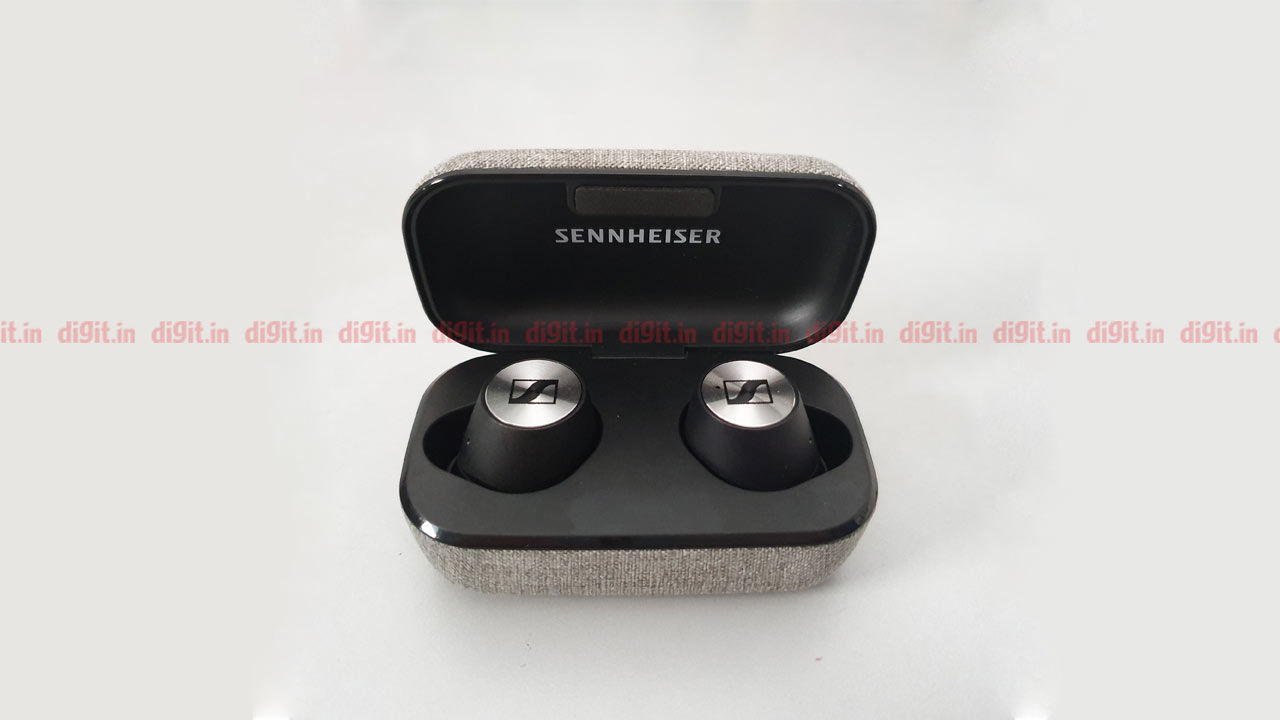 Sennheiser Momentum True Wireless Review: Everything a premium pair of TW earphones should be

The Sennheiser Momentum True Wireless earbuds almost encompass every aspect of what a perfect pair of true wireless earbuds should be. Although pricier, the earphones sport an array of features and also look aesthetically-pleasing. The sound quality is exceptional, easily one of the best sounding true wireless earbuds out there. The battery life is weaker when compared to its competition in this segment, however, the charging case does provide users with two full charges, which is quite decent. If you are hunting for a pair of true wireless earphones, and don’t mind spending a little too exorbitantly, the Sennheiser Momentum True Wireless earphones may just be the ones for you.

The quest to snip the unpalatable wires off Bluetooth earbuds has been ongoing for the past couple of years. Now, there are multiple models out there to dethrone the Apple AirPods from their reigning position in this segment. Sennheiser has also made its debut in this inflating segment with the Sennheiser Momentum True Wireless. The Momentum range from the company, up until now, has proven to be solid audio devices in their own categories, be it over-ear, on-ear, in-ear or wireless. The company is finally making its way into the completely untethered Bluetooth earbuds segment. Let’s look at how these true wireless earbuds fare in our review.

Barring a few minor, mostly inconspicuous flaws, the Sennheiser Momentum True Wireless earbuds are easily one of the best true wireless earbuds you can buy. The price of these earbuds certainly demand great performance, and Sennheiser has not disappointed here. The audio is clear and crisp. The usual high-standard sound profile of the Momentum range is maintained, with an extra boost from the new 7mm driver which results in a more controlled and capable audio performance. The bass thump is heard clearly in tracks such as Call on Me by Chris Rea and Another One Bites the Dust by Queen, however, it is not overwhelming. If you prefer the head-banging bass like on Beats headphones, these earbuds aren’t the right fit for you. Despite a prominent bass presence, audio and instrument clarity isn’t compromised in any manner. Freddie Mercury’s words in the song (mentioned above), are clearly audible and if you listen closely, you can even hear breath sounds, which is fantastic, since these earbuds maintain the integrity of recorded tracks. 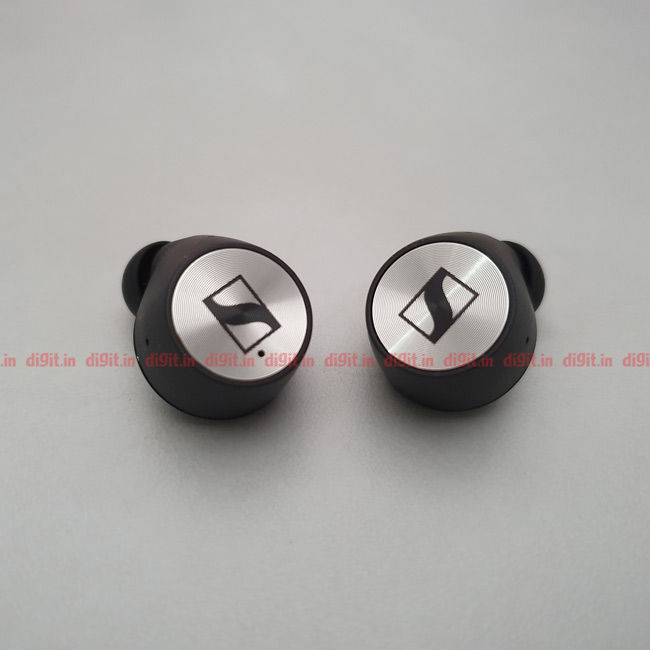 Mid and high frequencies are balanced impeccably and the sound output is quite natural, as mentioned above. They tend to suit just about any genre, which is an ideal scenario, especially at this price point. Drums sound big and bold in tracks like Something From Nothing by Foo Fighters. None of the frequencies ever seem to overpower the other, and the sound never gets screechy, even in the high frequencies. The earbuds are fundamentally perfect, when it comes to sound quality, if you don’t want your skulls to be rattled by overwhelming bass and prefer to hear the fine details in music since they tend to favour mid-range instruments and vocals over weightier sounds.

One of the features - Transparent Hearing - which allows you to hear your surroundings while listening to music, actually does enhance the sounds around you ever-so-slightly, but this doesn’t really matter since you can already hear a lot of what is going on around you because of inefficient isolation. This could possibly be because of the lack of foam tips. This is not a dealbreaker, but it would be a nice feature to add since better isolation translates to better immersion overall.

Call quality, on the other hand, is quite good as well. The person on the other end could hear what we were saying extremely clearly. While we could hear the caller clearly as well, the maximum call volume was a little lacking, by our standards. The earphones are also an absolute dream to consume content on. They feature aptX low latency, so media plays perfectly in sync. We tested this out across Netflix and YouTube, as well as downloaded videos, and the results are spectacular. The sound encapsulates you, and adds an element of realism to the content, when it comes to the sound.

Battery life is nothing extraordinary, unfortunately. The earbuds lasted about 3 and a half hours from full charge which is pretty close to the company claim, which is 4 hours. The charging case houses two extra full charges for the earbuds, giving you a total of around 12 hours of battery life, give or take (more take than give). 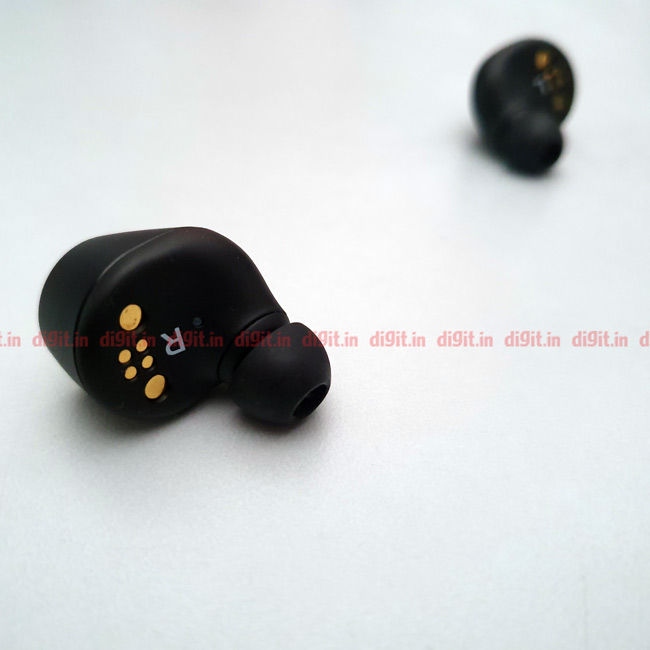 The Sennheiser Momentum True Wireless casts away the neck cable on the Momentum Free earbuds and packs in a spanking-new 7mm driver. The earbuds adorn silver detailing interrupted by a pattern of magnetic gold points that fix them to the charging case with a satisfying click. The earbuds are lightweight and extremely easy to secure in your ears. They also offer a comfortable and snug fit. The boxy shape may indicate an insecure fit further fueled by the lack of rubber wing tips, however, in our tests, we realised that the earbuds pretty much stay put despite the build and lack of wing tips unless you’re using them during an intense workout session. They should work quite well during jogging and commute.

The aluminium touch panels on the back of the earbuds add a certain flair to the design as well. Additionally, they do not stick out as much as other models from Sony and Bose. The box contains three ear tip sizes, we found that the default ones worked pretty well for us, however, you must switch sizes if they earbuds don’t seem to be secure in the ear. 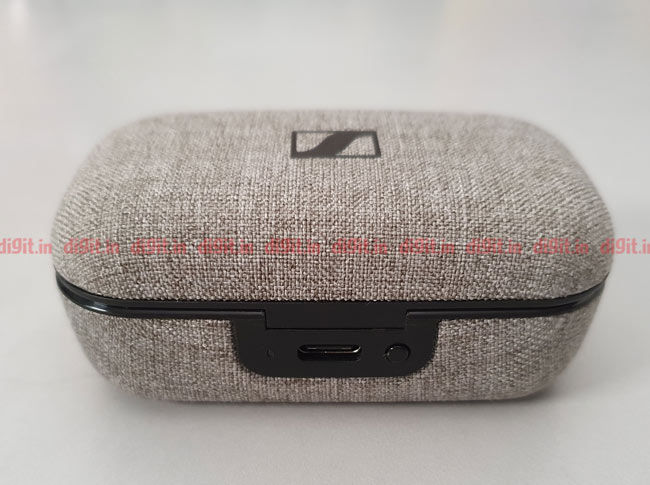 The charging case is made out of a greyish-tone coarse cloth with a classy heathered weave and houses the Sennheiser logo smack in the middle. The case is extremely attractive  compared to the standard, matt-black charging cases that are extremely prevalent. The sheer aesthetics of the charging case is unlike what we’ve seen in most true wireless charging cases before, and you can tell Sennheiser put in a lot of thought into how the case looks and feels in-hand. The cover houses magnets which cause the case to audibly snap shut when closed.

There’s USB-C charging and a battery level indicator on the charging case as well. The tiny light on the back of the case, right beside the charging port, glows green if the case has full charge, yellow if halfway or so, and red if the battery is running low. The earbuds really rely on the case to perform even the most basic functions like powering on or off. So, you will always need to have it on you. The case, although gorgeous, is slightly bulky and we’d prefer it even more if Sennheiser had worked on trimming down its form factor.

While the Sennheiser Momentum True Wireless does feature a host of features to aid functionality and ease-of-use, they can be slightly difficult to fully comprehend in the beginning. However, in a while, the earphones pretty much set themselves up every time you extract them from the charging case. Just be sure to keep the device you want to connect as the only active Bluetooth connection in range since it can get confused sometimes. 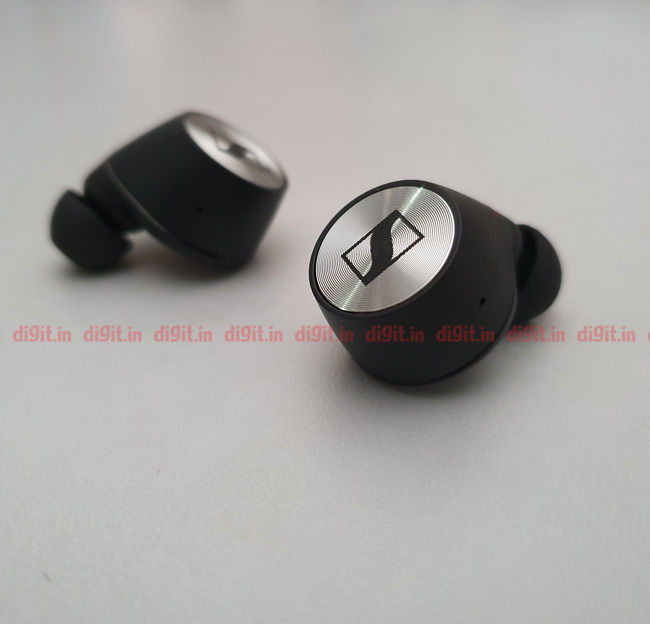 The touch controls, while convenient, really aren’t all that intuitive with several actions needing double taps or triple taps even, making it difficult to get accustomed to. To set up, you will need to touch and hold the back of both earbuds for five seconds in order to pair with a device. Tapping the left earbud once pauses the music and tapping it again resumes it. Additionally, the earbuds also pause music or media when you take one or both the buds out of your ear canal. Pressing the left bud twice plays the next track while pressing it thrice plays the previous one. The right earbud, on the other hand, can be used to accept calls and to awaken your voice assistant. Holding down the touch panel of the right or left earbud will increase or decrease the volume respectively. We were really displeased with the inability to control the volume precisely since holding down either bud increases or decreases the volume rather rapidly and achieving your ideal volume setting can be a bit of a precarious situation. 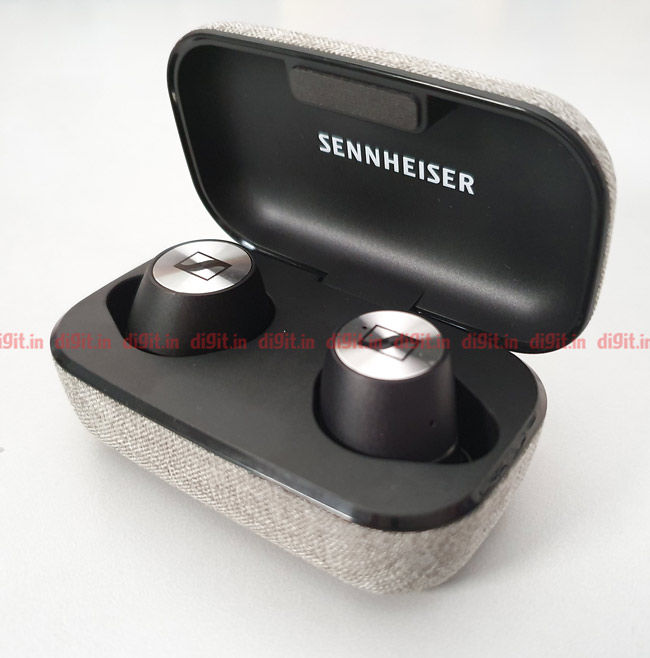 You can also tweak EQ settings to your liking by using Sennheiser’s Smart Control app. The changes this app allows is more than adequate for the average listener. However, we did find that the default tuning sounded better than any of the alternatives we tested. The app also shows you battery levels for each bud and offers control over the Transparent Hearing feature. The Transparent Hearing feature basically allows you to hear the ongoings in your environment while you are listening to music. The app also allows you to turn Smart Pause off, if you wanted to, however, we don’t understand why you’d want to since the feature is infinitely convenient and works pretty well too.

Sennheiser gave itself quite a task to accomplish by pricing the Momentum True Wireless earbuds at an exorbitant cost of Rs 24,990 since there was so much more pressure to prove their mettle. However, they haven’t failed at this in the slightest. The earbuds feature a stylish design, smart controls, and professional sound and are a fantastic choice for those who want to live the untethered life when it comes to earphones. The Apple AirPods cost half as much as the Momentum True Wireless, so if you’re an Apple user we’d recommend the AirPods over these. However, for audiophiles, these earphones are pretty much the best you can get in this segment. Apart from a few issues mentioned above, Sennheiser has managed to show off their audio prowess with the Sennheiser Momentum True Wireless.