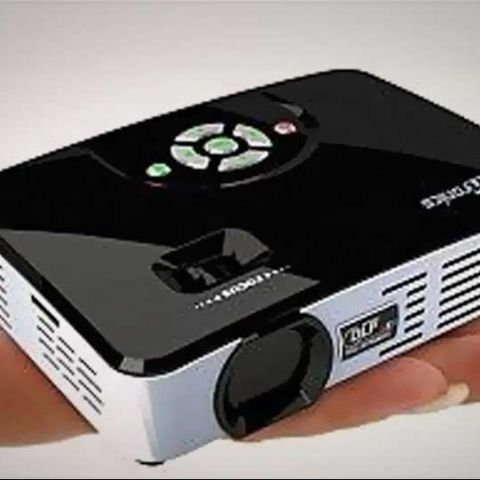 The iLume delivers fairly impressive performance from a pint-sized form factor. Well-built, the projector offers good brightness and sharpness, apart from solid HD video reproduction. The on-screen menu is well laid out, however, the remote response is slightly iffy. The iLume packs decent speakers for occasional use, but you will need a proper set for most usage scenarios.

Projectors have always appealed to a fairly limited demographic – usually those who had enough space in the home to set it up, and enjoy it the way it was supposed to be used. For the rest of us, projectors were unviable, because of space, or because they were too expensive, or required a lot of maintenance. Portable and short throw projectors did solve the predicament to a certain extent. Now, the feature set and quality is improving as well.

Build & Design
The iLume projector from Portronics is a fairly pocketable. The form factor ensures the iLume can sit in the palm of your hand. The design and the looks are fairly simple.

The top of the Portronics iLume projector has a glossy black coloured finish, while the sides have a brushed metallic grey look. On the underside, the profound design of what is essentially the feet for the projector. There is a bit of gap between the base of the projector and the surface of the table it may be placed on, allowing for slightly better heat dispersion. For that, there are enough vents on the sides to keep the projector cool. 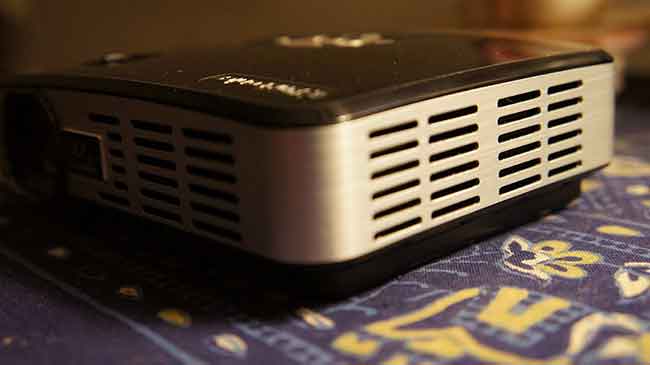 Adequate vents on the sides is enough to keep the projector fairly cool, for the most part.

The top of the Portronics iLume projector has a bunch of hardware keys for the basic tasks – power, menu and navigation. These can also be done with the remote. Towards the edge, closer to where the lens is placed below, there is the dial to manage the focus. It is a fairly sensitive setting, more than most other projectors we have seen, and will change sensitivity levels with the distance from the wall. The correct setting on this makes a huge difference to the final picture quality.

For a pocketable projector, the Portronics iLume is very well built. The materials used are fairly good quality, and it has been put together very nicely. It is a bit surprising that Portronics isn’t packing in a dust cover or a carrying case for this projector. We are slightly worried about the how long the glossy black finish will retain its luster, with all the dust, scrapes and fingerprints that will be very visible on it. So much so that even the power adapter is glossy black! Quite honestly, this is the very first time in all my years as a tech reviewer that I have seen a glossy black power brick – they have always been matte, irrespective of the colour. 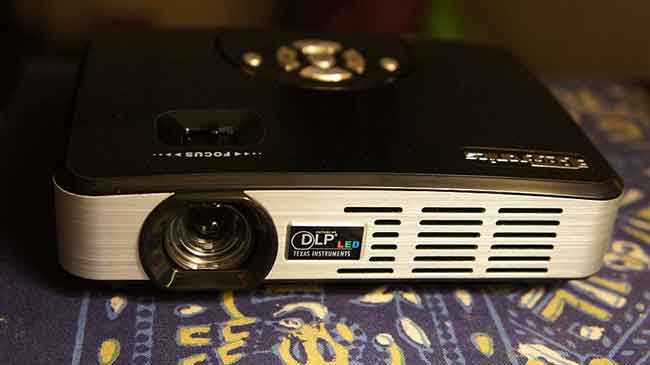 Very good build quality. The materials used are high quality, and the look screams class. The glossy part is something that will need a lot of maintenance though.

Features
For a tiny device, the Portronics iLume does pack in fairly decent specs. It features an LED projector, with Texas Instruments’ DLP technology. The playback resolution is 1280 x 800 pixels, in the 16:9 aspect ratio.

The brightness figures quoted – 400 ANSI lumens – is fairly impressive. We did find that this projector is very bright, something we will explain in detail in the Performance section.

There is no shortage of input options. Proprietary cables take care of the component input source, while there is also the VGA port and more importantly, the HDMI input for your devices. You can play back media off the USB port or the micro SD slot, which is nicely hidden away on one side spine, amidst the cooling vent grille designs!

Portronics says that you can blow up videos to a maximum of 120-inches display, and we will get into that in detail when we discuss the testing experience in the next section. 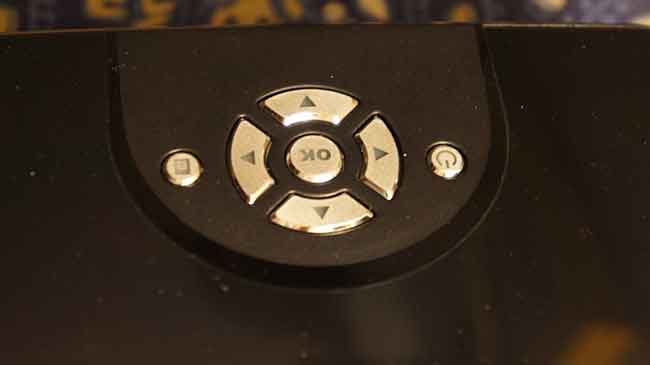 The cluster of keys on the top panel, can use these when the remote's inconsistent response has frustrated you enough.

The Portronics iLume’s remote control is fairly small and thin – credit card-ish, and packs in almost all necessary keys without feeling cramped. Unfortunately, the response of the remote is rather inconsistent. It will not work the same way from the same spot as earlier, for example. This is a bit of a downer, and you will mostly end up jumping to the projector and using the hardware keys there.

Performance
For a device this compact, there are the limitations in terms of the feature set and the resultant performance. The good thing in the iLume’s case is that the compromises may be there, but not impacting the performance at all. For starters, the resolution of 1280x800 pixels is fairly acceptable, even for someone who may be watching a lot of 720p HD or 1080p HD content.

We connected the WD Live HD Media Player to the iLume via HDMI, and the setup is fairly straightforward. Plug in the source, and switch to the corresponding source. We had the WD Live set to output 1080p (24 frames mode), but the iLume handled the downscaling very seamlessly. From a distance of around 3 feet from the wall, the projection size was around 50-inches.

Movie playback overall was excellent, with colours handled brilliantly and fast motion visuals fairly smooth for the most part. Why I say most part is because if you have a fast moving object running across the screen on a bright/white backdrop, you do see motion judder. If it is a dark-ish backdrop, there is no visible motion judder. 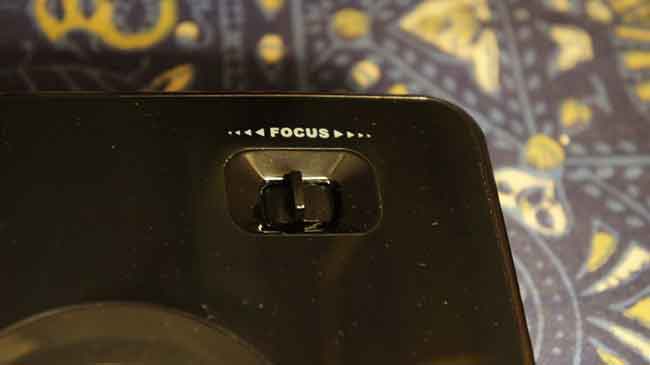 The dial to set the focus. This is a fairly sensitive setting, but a very critical one. If you move the projector closer or further away from the wall, do set this again.

Content that is originally in High Definition formats (we tested with 720p and 1080p) looks brilliant. Among the portable projector category, this is the crispest video reproduction we have seen by far. And that is helped by the fact that any scaling changes are done without introducing additional noise into the video. Colour gradation is a bit of problem with certain projectors, but the iLume handled stacked shades of the same colour with ease – keeping them all distinct clearly, without any visible smudging. That is basically half the battle won, if the colour handling is correct. You can tweak the colour tone settings between cool, natural and warm, and change the brightness and contrast levels as well. Black levels are fairly good in terms of depth, and that accentuates the colour handling overall.

For Standard Definition content, it does look good if the projection size was 50-inches to the maximum, but any more, and the issue with blurring and edge noise issues were creeping up. We connected the iLume with a Tata Sky DTH connection, again via HDMI, to see how normal channels look like. But the shortcomings for SD content is surely not the fault of the projector, and this is the problem with SD content always, irrespective of the source of playback.

The on-screen menu is quite visually appealing and the sideways tracking for navigation is quite slick. The options are clearly listed out, and the font style and size is adequate enough for easy viewing even if you are projecting a fairly small image. For a portable projector, that is very essential. All video and audio connectivity options are on the back.

While the brightness is essentially rated at 400 lumens, it is adequately bright for most home usage scenarios. Most users will not necessarily have a dedicated room for home theater usage, completely prepped and ready for a pitch-dark environment. Some projectors struggle if there is light tricking in. We were quite surprised to find the iLume holding its own in terms of performance despite some ambient light trickling in from between the curtains. To double check, we switched on a 16W LED lamp in the room after sundown, and yet the viewing experience remained fairly acceptable. While this isn’t the perfect scenario for constant viewing, for the projector to be able to handle it once in a while will keep the viewing experience from breaking up.

There is a USB port for playing back media. While the literature states that it can play back almost any video format you throw at it, there are some limitations in real life. It did not play back certain containers within certain formats. You would be better off connecting this mostly to another playback source like the WD Live for playing back movies.

Bottom Line
The Portronics iLume is one of the better portable projectors available in the market. We are particularly impressed by the overall reproduction quality for HD videos. The performance surely outreaches what the specifications would suggest. However, for around Rs. 40000, this one does have some shortcomings. Which is why the BenQ Joybee GP2 does make for a slightly better deal, and because for the positioning as a portable projector, it offers better performance in certain critical aspects – offers built-in battery backup, better format and container compatibility for native video playback and an iPhone/iPod Touch dock for media playback as well. The Joybee GP2 currently costs around Rs. 38,000 in the market, and is worth considering. 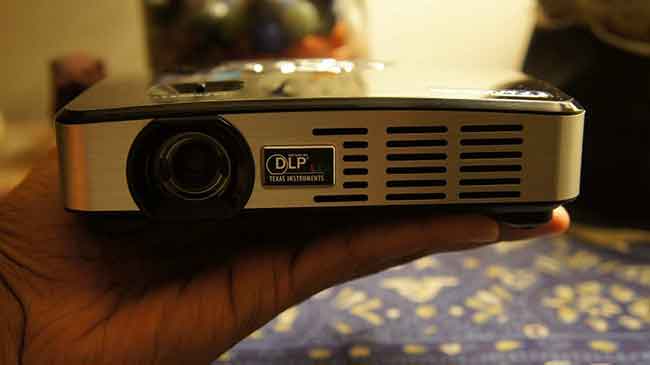 Fairly compact projector, to pack up and carry around. Fits easily in the hand.