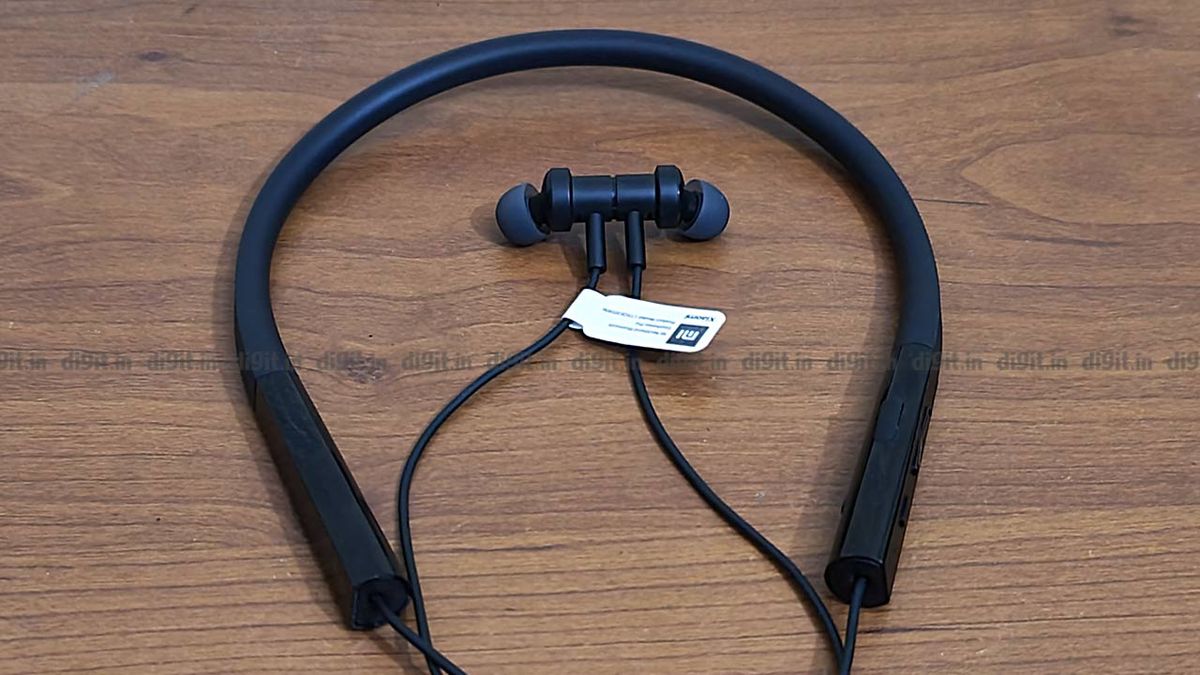 If you are a bass lover, the Mi Neckband Bluetooth Earphones Pro is a decent purchase since it comes with great battery life, a comfortable fit, IPX4 rating, and voice assistant support. You get all of this and ANC for Rs 2,499, which is a pretty decent deal.

As we touched upon before, the Mi Neckband Bluetooth Earphones Pro compete against the Realme Buds Wireless Pro, since they’re both relatively inexpensive wireless ANC-enabled earphones. Now, they definitely don’t look or feel as premium and well-built as the Realme Buds Wireless Pro. Although both earphones are primarily made out of plastic, the Realme buds have a smooth matte texture across the body. In contrast, the Mi earphones feel significantly more plasticky and cheap. The wires don’t feel as robust and premium too. But since the Mi earphones are priced under 2K, the less premium build quality gets a pass from us. 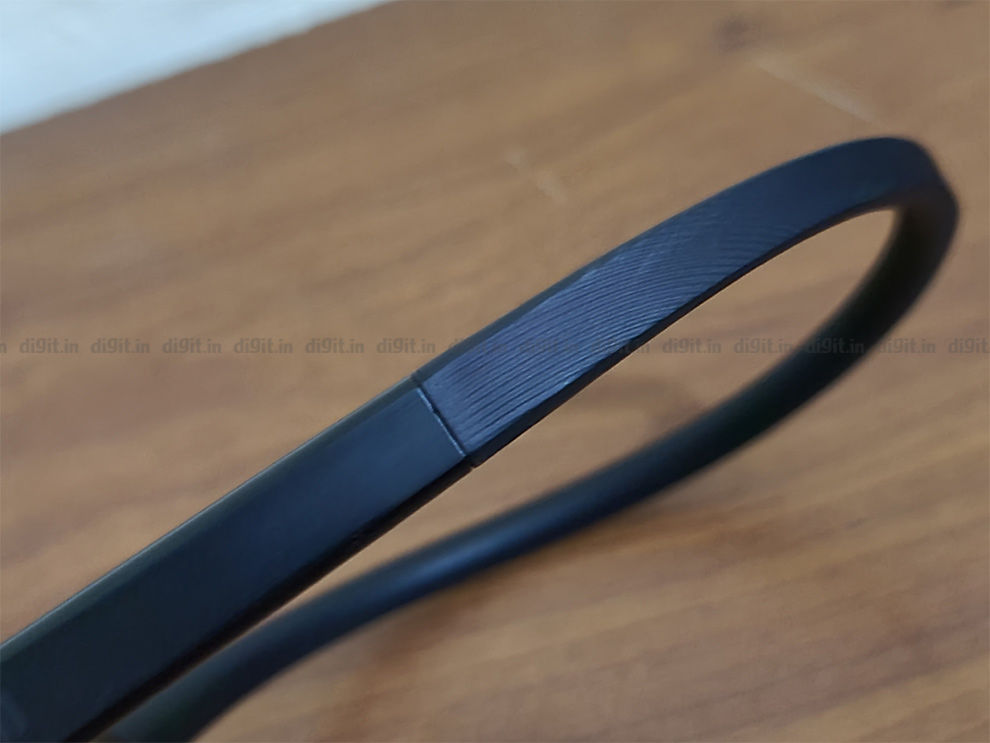 The neckband is made out of rubber that feels like the most well-built part of the earphones. There’s a textured finish on the upper side and the underside that touches your neck is smooth rubber. The weighted modules on either side have a dual glossy and matte finish. The finish is typical of earphones in this price range. The buttons, on the other hand, are nice and clicky, with good tactile feedback. There is one multifunction button, volume + and - buttons, and an ANC button at the bottom of the module. 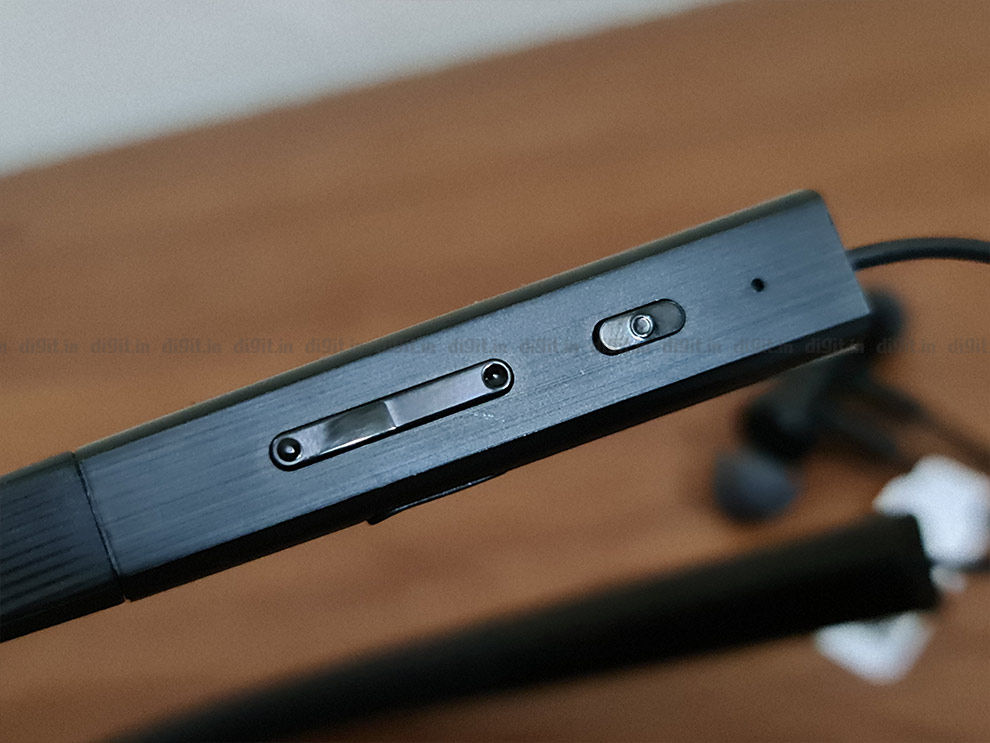 The right module houses all buttons as well as the micro-USB charging port which is tucked under a rubber flap. It’s a shame to see Mi implement micro-USB charging since it is awfully dated for 2021. We wouldn’t have minded a Rs 500 price hike just to get USB-C charging, that would allow us to ditch the extra micro-USB cable we had to carry, which is annoying since most devices today use USB-C cables.

The earbuds feature a matte and glossy finish like the weighted modules and the buds’ nozzles are angled to allow for a better fit. Mi provides a total of 3 pairs of silicone ear tips in the box. The ear tips have an anti-blockage speaker net design that prevents small particles from entering inside the device via the speaker net. The back panel of the buds have a circular textured look and they’re also magnetic allowing both buds to attach to one another when lying idle on the chest. 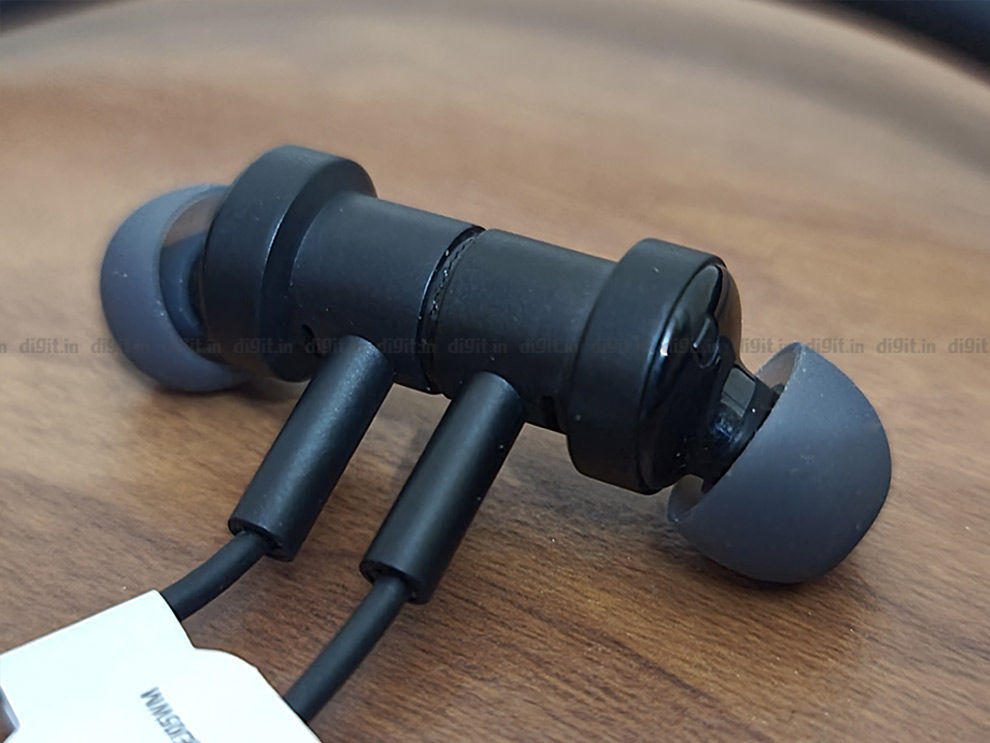 Comfort-wise, the Mi Neckband Bluetooth Earphones Pro are pretty good, even over long listening sessions. The fit is excellent, for the most part. We were able to do light activities and jog around with these buds on and they didn’t come loose, which is commendable. Over the course of using these buds, there were very few instances where we needed to readjust them in our ear. If you find the right-sized ear tips, you can rest assured that the earphones will be snug and comfortable over long periods.

Unfortunately, though, we did find the passive isolation to be lacking. Even though we got an extremely snug fit with the Medium-sized tips, environmental sound seeped in easily with ANC turned off. This did cause some issues with the effectiveness of ANC on the device. We will get to that in the Performance section of this review.

Priced at Rs 1,799, the Mi Neckband Bluetooth Earphones Pro are a feature-laden pair of wireless earphones. You get Active Noise Cancellation that suppresses environmental sounds, and you also get ENC (Environmental Noise Cancellation) that limits sound from your surroundings being transmitted to people you’re talking to on calls. There’s no Ambient or Transparency mode though, which is found in the Realme Buds Wireless Pro.

The earphones also come with IPX5 certification, so the earphones can shrug off sweat and light splashes. The earphones can be utilised in the gym (unless you sweat profusely) or in light rains without having to worry about liquid damage. Mi has also stated that the earphones have low latency. In our usage, we found there to be minimal delay when streaming content on OTT platforms such as Netflix and YouTube.

The earphones also come with voice assistant support. You can press the multifunction button on the right weighted module twice to activate the voice assistant on your device. The buttons also allow users to perform other functions such as pause/play music, answer/decline calls, control volume, seek tracks, and cycle through ANC and normal mode. 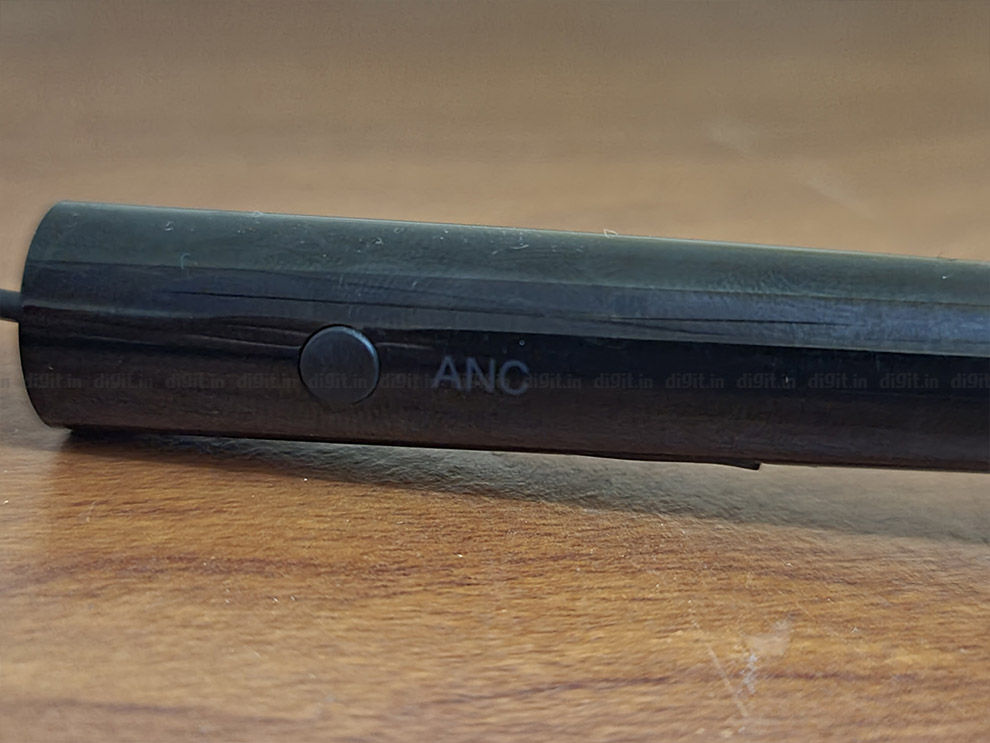 Pressing the multifunction button once pauses/plays the music. Long pressing the volume plus button skips to the next track, while long-pressing the volume minus button takes you back to the previous one. The ANC button at the bottom of the right module switches between ANC and normal mode with single presses. There’s no accompanying app, so you can’t customise these controls. Still, the controls are fairly intuitive and work pretty well.

For connectivity, the earphones come with Bluetooth v5.0 and support the SBC and AAC codecs. No aptX here, but that’s understandable at this price point. The wireless connection was strong throughout our testing period, there were no lags or delays of any kind. 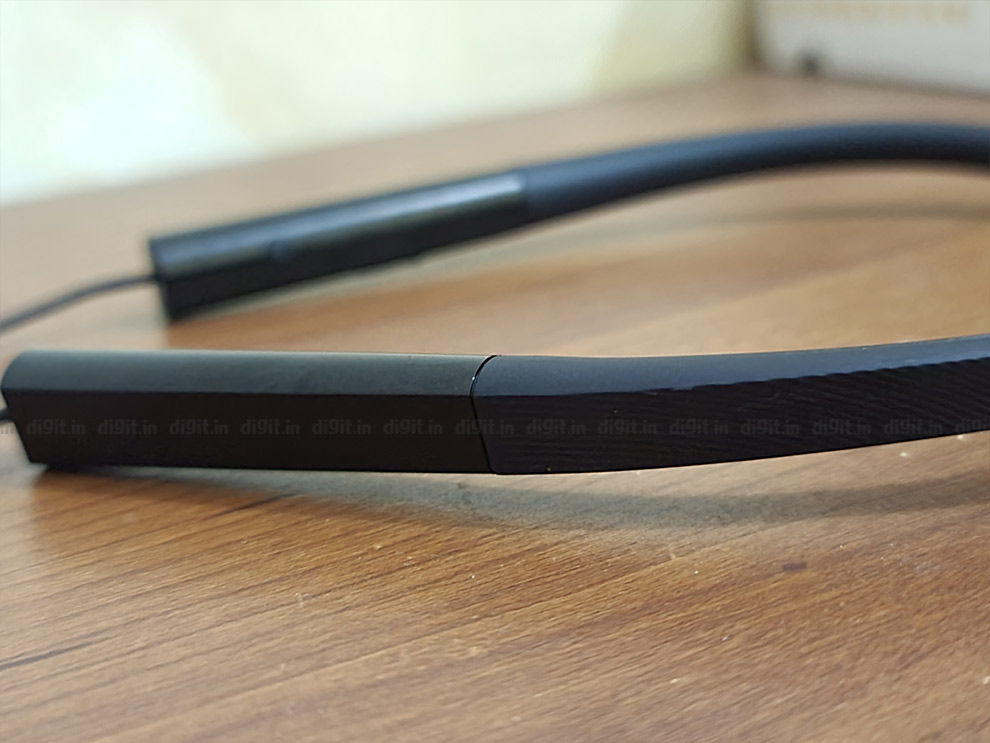 The 150mAh battery in the earphones is rated at a solid 20 hours of playtime, according to the company, with the volume set at 50 per cent and ANC turned off. We tested the earphones with ANC turned on and the volume set to around 60 per cent. The earphones lasted a good 16 hours on a single charge, which is pretty impressive, especially for the price point. If you listen to music without ANC turned on, you may very well be able to get to the quoted 20-hour-mark before you have to charge the device. Charging the earphones back to full takes around an hour and a half, and sadly, there’s no fast charging onboard.

The Mi Neckband Bluetooth Earphones Pro is powered by 10mm drivers, and the sound signature is definitely bass forward. The earphones are targetted towards bassheads that are found in droves in India, especially. The bass, while punchy and lively, came off as slightly boomy in our testing. Listening to the track Prisoner by Miley Cyrus ft Dua Lipa, the bass beats that start off at the beginning of the track drown out the details in Dua and Miley’s vocals. The sound is extremely coloured in favour of the lows, and we wish Mi had shown a bit of restraint here.

In vocal-centric tracks with little to no presence of bass beats and low-end instruments, the Mi Neckband Bluetooth Earphones Pro show a decent amount of detail and presence. In Hello by Adele, her voice soars, but the lower notes sound slightly cloudy due to the dark expression of the lows. The highs are decently represented, although the detail is shrouded a bit due to the towering lows and mids. For example, in Hysteria by Muse, the cymbals sound dull and are almost hidden in the mix that is overpowered by the drums and guitar. 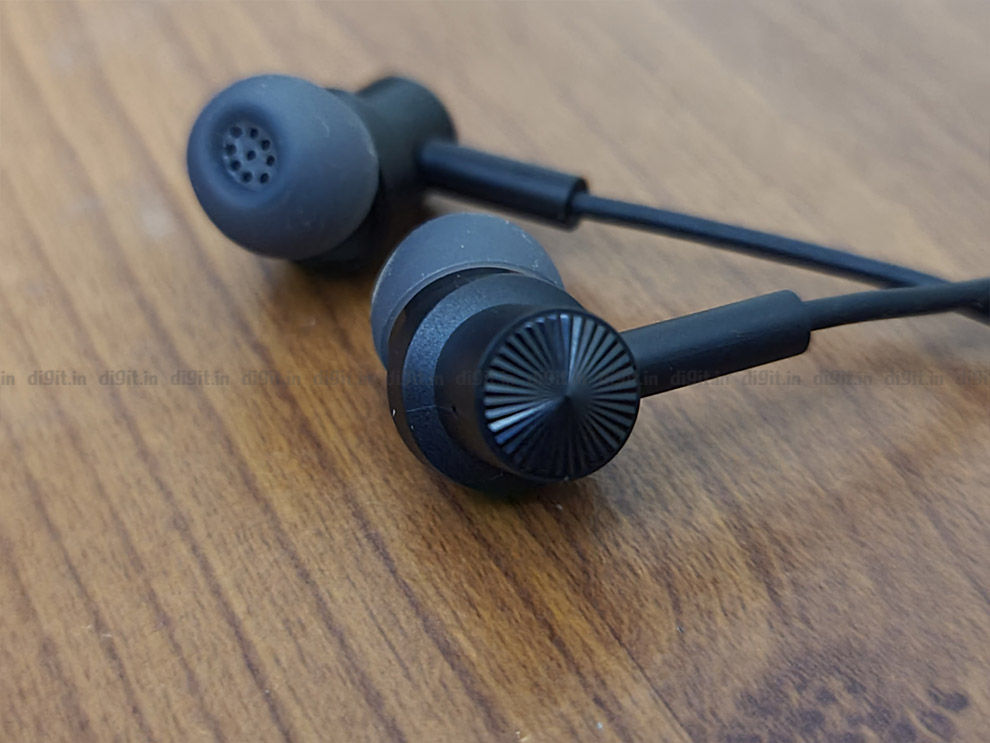 Coming to ANC performance, these are entry-level ANC earphones, so we set our expectations straight from the get-go since they obviously wouldn’t deliver the quality we get from premium Sony and Bose earphones. For the price, the Mi Neckband Bluetooth Earphones Pro do a mediocre job. Turning ANC on does suppress low-frequency, constant sounds slightly, but they’re still audible, there’s only a slight reduction in their intensity. Other mid to high-range sounds such as mechanical keyboard typing, high-speed fans, and human voices aren’t diminished. In fact, they sound almost as loud as they did with ANC turned off.

While it is great to see Mi bring ANC to the masses at this competitive price point, we hope they tweak their next wireless ANC earphones iteration a tad more to quiet down the surroundings more effectively. Part of the problem could be ineffective passive isolation that also dampens the effectiveness of ANC by letting more sound in.

Moving on to the microphone, the Mi Neckband Bluetooth Earphones Pro are surprisingly decent for phone calls. We were expected hollow or distant sound at this price range, as we usually witness, but the Mi earphones relayed our voices pretty well on phone calls. The voice was clear and the microphone didn’t pick up a lot of the ambient sounds.

The Mi Neckband Bluetooth Earphones Pro make Active Noise Cancellation accessible for the masses since they are priced competitively at Rs 1,799. While the ANC on these earphones isn’t great, it is passable for the price. The bass response is slightly muddy and overpowering, so if you’re not a fan of bass-forward earphones, these earphones are definitely not for you. If you are a bass lover, the Mi Neckband Bluetooth Earphones Pro is a decent purchase since it comes with great battery life, a comfortable fit, IPX4 rating, and voice assistant support. You get all of this and ANC for Rs 1,799, which is a pretty good deal.