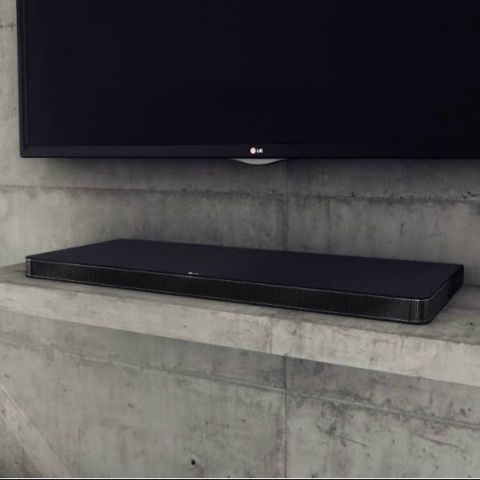 The LG SoundPlate LAP340 has an MRP of Rs. 30,990, which is a significant amount of cash to drop on a compact home theater audio solution. When you take into account the SoundPlate’s negatives that include average performance and absence of features, then it does become really difficult to recommend.

The LG SoundPlate LAP340 is meant for those of you looking for a minimalistic sound solution for your HDTV and especially for those of you who have a super slim HDTV hanging from your wall and don’t want a mess of speaker wires messing up your groove. There’s no denying the fact that the SoundPlate is good looking and sleek, but does it perform adequately in its primary function as a speaker system?

The LG SoundPlate is a 120 watt 4.1 channel speaker system with built-in dual 40 watt subwoofers, two 20 watt surround speakers and two 20 watt front speakers. It has limited connectivity options but that is a deliberate decision by LG in order to help it keep its footprint small. The only way you can physically connect the SoundPlate to your TV is through the optical audio port. You can hook up your mobile devices to the SoundPlate over Bluetooth and if you own an LG HDTV, then you can use the proprietary SoundSync feature that wirelessly streams audio from your TV to the SoundPlate over Bluetooth. Unfortunately, if you don’t own an LG HDTV, then optical audio is your only option.

The minimalism carries forward when it comes to what else is packed along with the SoundPlate. A peek in the box will show that the SoundPlate only comes with some manuals, a small 8-button remote, an optical audio cable and a wall bracket. While I understand LG’s philosophy behind the SoundPlate, it feels a little unnerving to see so little with a product that costs so much.

Alright, this is where the LG SoundPlate really stands out, since there’s not really anything like it in the market (apart from the Bose Solo). LG is making a concerted effort with the SoundPlate to target those HDTV owners who would have otherwise considered a sound bar. Sound bars make it a point to be unobtrusive and invisible and let the TV get all the attention. The SoundPlate, on the other hand, is unobtrusive but also quite sleek and good looking despite the fact that it is designed to stay under your TV. Yes, unlike other soundbars, the LG works as a sort of platform on which you place your HDTV. It’s also built quite well and has a textured metal body along with speaker grilles on three sides. The underside hosts two circular down firing subwoofers.

The rear edge of the SoundPlate is curved and has a few buttons (volume controls, power and source selection). Also on the back is the optical audio port, the power port and a toggle switch for auto power on/off.

The SoundPlate’s remote also has an aversion to complicated controls. It has eight big buttons that makes it a cinch to use even in the dark. Apart from the regular volume, mute and power buttons, the remote has buttons for turning on ‘Cinema Sound’ (the only sound enhancement that the SoundPlate offers), switching to Optical Audio, switching to SoundSync when it is connected to an LG TV and switching to Bluetooth.

As you must have figured out, the downside of the design is that there are limited ways for the SoundPlate to communicate with the user. The only way you can figure out if your command has been recognised is if the tiny LED light behind the grill on the front blinks in a different colour. When I was setting up the SoundPlate and ran across some problems (because of a faulty remote), it was quite frustrating to not have it help me figure out what the issue was.

Overall, if you’re a fan of minimalism, the LG SoundPlate will probably win you over.

After that, you don’t need to worry about the SoundPlate any longer. It will automatically power up when your TV does and will immediately start working provided you haven’t fiddled around with your TV’s audio output settings.

Once I had it connected to the Panasonic Smart Viera 47 LED TV, I was ready to go. I tested the SoundPlate’s abilities with two movies- Gravity and Gone in 60 Seconds, which are ideal to test how dialogue and whispers, along with action heavy scenes, sound. While the audio output from the SoundPlate was a clear upgrade over the TV’s built-in audio, it was far from perfect. The most distracting thing about the LG’s output was the way it would let deep bass rumbles completely take over to such an extent that everything else became unclear. This was particularly a problem in Gravity which has a lot of soft dialogue spoken while a subtle background score plays. More often than not, the background score’s bass lines resulted in me not being able to hear what the hell Sandra Bullock or George Clooney were saying. Switching on ‘Cinema Sound’ alleviated the problem by a small degree but that was about it.

Gone in 60 Seconds played better with the SoundPlate mainly because it’s not a very subtle movie and has a lot of loud action scenes. However, even here, there was no wow factor when it came to the audio output. The bass was loose and rumbly, the mids were very muted and the treble swayed between being overly sharp to flat.

The SoundPlate is, quite frankly, terrible for music playback. I played a couple of Daft Punk, Chemical Brothers, Mastodon, Intronaut and M83 tracks on the SoundPlate through Bluetooth and it all sounded average thanks to the unfocused bass and absence of mids.

An overall problem with the audio output was also the inability of the SoundPlate to handle really high volumes. Once you pushed past a certain limit, the sound quality would drop and would sound really jarring and unclear.

On a positive note, the LG SoundPlate is quite loud for its size. If you’re only on the lookout for a good looking audio system that can output higher volumes than your TV, then the LG fits the bill.

The LG SoundPlate LAP340 has an MRP of Rs. 30,990, which is a significant amount of cash to drop on a compact home theater audio solution. When you take into account the SoundPlate’s negatives that include average performance and absence of features, then it does become really difficult to recommend. If you love the look and profile of the LG, then you can consider the similarly priced and similarly designed Bose Solo.

If you aren’t particular about sticking to the SoundPlate’s looks and design, then you can also consider the significantly less expensive LG NB3520A and the Yamaha Sound Bar YAS-101 BL. For better performance at a slightly higher price than the SoundPlate, you can also look at the JBL Cinema SB400 Sound Bar and the Harman Kardon SB 16.