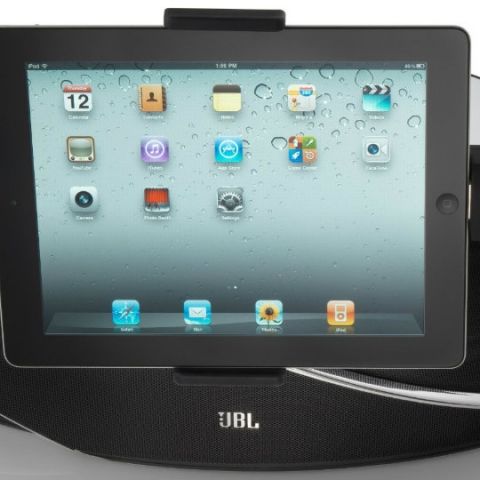 The JBL OnBeat Xtreme is a robust all-round performer. It lets you dock not just smaller Apple devices but also the iPad. With bluetooth playback and looks that deserve a double take each time, this is the dock of choice for many especially considering the price.

While most docks try to go designer with their looks – you know, minimalism or curves or cubism or something abstract – the OnBeat Xtreme has gone completely industrial in this department. And while the design may not be for everyone, the device is undeniably a performance powerhouse. It’s so much of an all rounder when it comes to both performance and the features it packs in that I wouldn’t be surprised if years down the line we look at it as the PortaPro or ATH-M50 of the docking world. Design of course is a subjective parameter but to me, the JBL OnBeat Xtreme looks absolutely stunning with its jet black metal grille, cross weave pattern and chrome accents. If you see it up front, the chrome accents seem to form an X across the device. The lavish use of matte black hard plastic and its overall hulk give the device a decidedly sturdy presence. With a footprint of about 18 by 10 inches, it isn’t exactly small by any standards, but it is necessary as the device houses massive drivers that output 120 watt RMS of room filling audio. The docking mechanism too is adjustable and well thought out, letting you not only accommodate an iPad but also turn orientation from portrait to landscape. Besides sporting a nice design, the OnBeat Xtreme is brilliant at waking you up. Its thump and clarity will surprise even the biggest sceptics. Certain tones sound really good on the device – string bass, for instance. Despite its bass focus, it’s not lost out on detail, clarity and sharpness. While the Philips Fidelio DS9000 mellowed down the edge in our metal tracks, this one maintained the hardcore appeal that a prog/thrash track deserves. The JBL did have issues with certain frequencies on our sweep and strangely vocals lack body, but it has several things going for it. It’s packed with features such as Bluetooth pairing, iPad docking ability, landscape/portrait capability and a video out – the only dock we’ve seen so far to have one. With its feature set and top of the pyramid performance, there is little that we can say that will dissuade buyers from going for this device. The thump, the detail, the nice remote, the looks all make it our Editor’s Pick. If you’re in the market for a mid-range dock (by price) this is it.

The iPod dock was subjected to a series of frequency tests. The first volley of test samples included tones at various frequencies such as 30 Hz, 50 Hz, 100 Hz, 250 Hz etc. This was followed by 22kHz - 20Hz sweep. Here we checked for distortion and any sort of clipping.

The next set of samples tested the qualitative aspects of performance. Each track tested a particular aspect of audio tonality such as stereo separation, vocal performance, instrument separation, and detail etc. Tracks were also selected based on different genres:
• Bass reproduction on Massive Attack’s bass heavy track Angel for accuracy of lows.
• Chris Rea’s track Call On Me to check if speakers retained that husky edge in vocals.
• Stereo separation was tested on an old favourite: Whole Lotta Love - Led Zeppelin.
• Binaural Stereo tonality sample had two instruments in different pitch but in harmony
• The operatic orchestration on Therion’s O Fortuna was used to judge highs.
• We used an edited version of Selkies by Between The Buried and Me to check for instrument separation.
• Dream Theater’s Pull Me Under was used to gauge a mixture of performance areas same as Time by Pink Floyd for detail, which is in itself a masterpiece of production.
• Percussion on Brutal Hearts by Bedouin Soundclash is good enough to literally shake up any driver.