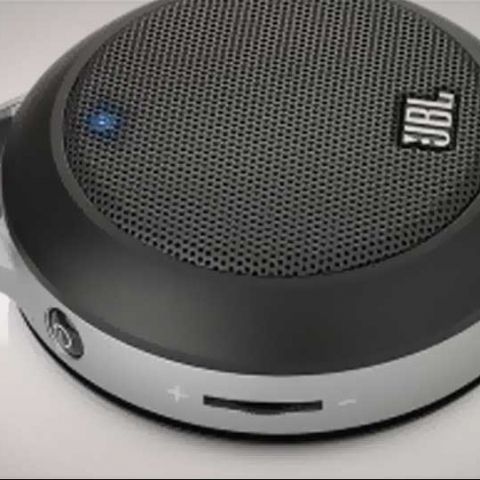 The Micro II from JBL is the ultimate portable speaker, offering surprisingly good audio. It disproves the claim that "good sound comes in big speakers." No, we are not talking about the so-called sound enthusiasts and what they like. We are talking about the affordable products that a common man can purchase.

We have tested quite a few portable speakers of late, and most of them have been the Bluetooth and wireless types. When the JBL Micro II landed on my desk, out of habit, I was getting ready to do the Bluetooth handshake between this and the iPod Touch. But hang on a second! This is old school!

The design and the size, actually the lack of it, is what will catch your attention immediately. You can probably keep this on your palm and still have some real estate space left to keep a couple of cookies to munch on! The circular design means you cannot really place it in a way that faces the listener. That may not be a major drawback in most usage scenarios, but audio will always sound better when the speaker isn’t looking up at the ceiling. We will get more into the detail in the performance section.

On the front is the black grille, framed by a matte black circular ring. Running along the side is a strip of silver, which houses the power button, volume control dial and the 3.5mm jack for daisy chain to other speakers.

While the base of the JBL Micro II speaker is curved on the sides, there is enough flat area to keep it stable when kept on a table or any flat surface. The bottom is where the 3.5mm cable is cradled, with a cable that winds around the circular side once.

The materials used on the JBL Micro II are fairly good quality, even though it is mostly plastic. The use of tri-tone colour is rather interesting – it remains fairly understated, yet the tinge of grey and the orange audio cable do lend it a dollop of excitement.

The JBL Micro II is a portable speaker, but does not have any wireless connectivity options. What you get is the 3.5mm headphone jack for hooking up to a wide range of sources. The integrated cable has a nice stowaway spot for it when not in use. The length is not very long, but sufficient enough to not make it tough to keep the speaker away from the connected device.

The Micro II is a mono speaker with one 40mm driver, and no separate bass engine. For something of this size, that is a compromise that is more than acceptable.

The portability aspect of the JBL Micro II also comes from the built-in battery, the capacity for which has not been specified, but did give some impressive results during the tests.

You might wonder about the logic of a 3.5mm jack for audio-out, from the Micro II. The idea behind that is to allow you to connect a bunch of Micro II speakers in a chain, to get a more wholesome sound experience. Not sure how many people will do it, but sounds like a fun idea!

Keeping the form factor limitations in mind, we were not surprised to find that the Micro II does have a rather basic specification sheet, as far as audio playback was concerned. First up, it does have a microphone, and cannot be used as a speakerphone. Secondly, there is the monaural sound that you will have to make do with, no stereo separation or a dedicated bass driver. Even if you daisy chain multiple Micro II into the setup, the audio will still remain mono.

Despite being almost 50% the size of its own cousin, the SoundFly BT, the Micro II does offer some rather surprising results. For the sake of comparison, we will also include the Jabra SoleMate speaker into the equation. Despite the 2.1 stereo speaker arrays in the SoleMate, the Micro II offers noticeably superior treble quality, at almost all volume levels. JBL Micro II has a crisper, yet not shrill high end, and vocals sound a lot clearer than they do on both the SoleMate and even the SoundFly BT. As with small sized speakers, clarity depends on the volume levels. We connected the iPod Touch to the Micro II and set its volume at 100%. On the device, we used the dial to jump between volume levels. For most music, the max usable volume level would be around 80% before clarity takes a beating. If the music is something the likes of Slipknot or Dream Theater make, then the max usable volume on the device would hit the ceiling somewhere around 60%-65%.

We had talked about this in the first section where we had explained that the design ensures you will most likely keep the Micro II facing the ceiling. While we did not see any problem with the audio orientation when facing upwards, it is always better to somehow prop up the Micro II so that the audio driver faces the listener.

Yes, there are significant limitations with the Micro II, in terms of the specifications on the sheet. But, for the price this is available at, we cannot hold anything against the Micro II. It is better than all the alternatives out there, in the same price bracket. When we say that it matches the performance of the much more expensive SoundFly BT, it is a positive. Meant for those who don’t want to bother with the wireless connectivity!