The JBL E55BT has many strengths. In terms of design, thoughtful features make it highly portable, even if the build itself could have used less plastic to feel sturdier. Audio performance will displease only pure audiophiles – the warm sound signature from the dynamic drivers doesn’t sacrifice treble performance and does a good job of targeting a balanced output. Along with the multi-device connectivity, the E55BT is a good choice for a budget bluetooth headphone.

There’s a certain lure with wireless headphones that is hard to ignore. With wireless over the ear headphones, you get the power and ergonomics (usually) of over-ears while you also get a certain degree of portability that is usually attributed to IEMs. However, a lot of manufacturers stop at cutting the cord and do not optimise their headphones for the wireless experience. The JBL E55BT features a lot of elements that put it a cut above the rest right out of the box. However, does it maintain a similar superiority when it comes to actual performance?

To start off, we received the blue model of the E55BT, while the same is also available in red, black and white. While we haven't had our hands on the other versions, the blue itself is quite striking and eye catching. As mentioned above, design plays a huge role in making a wireless over-ear headphone portable enough to be carried around like an IEM. The JBL E55BT has no lack of such measures by a long shot. The yoke is made of aluminium and a foam overlay on the headband is covered with textured fabric up to the ear cups, hiding the actual extent of plastic used in its design. 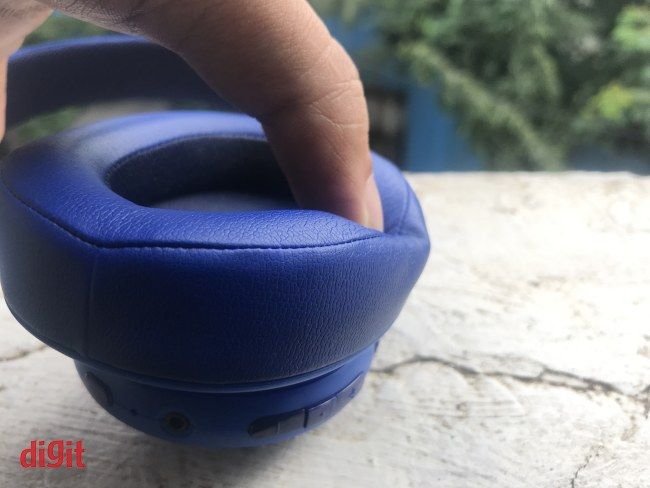 The headband foam is minimal, but since the headband itself doesn’t have a strong grip on your head and is rather light, the cost-cutting with the foam is not noticeable. The cups themselves are made of a thick layer of matte finish plastic with texture highlights on the outside. There’s an outer shell on each cup with the buttons which sits on a  larger, inner shell with the foam padding for the cup. 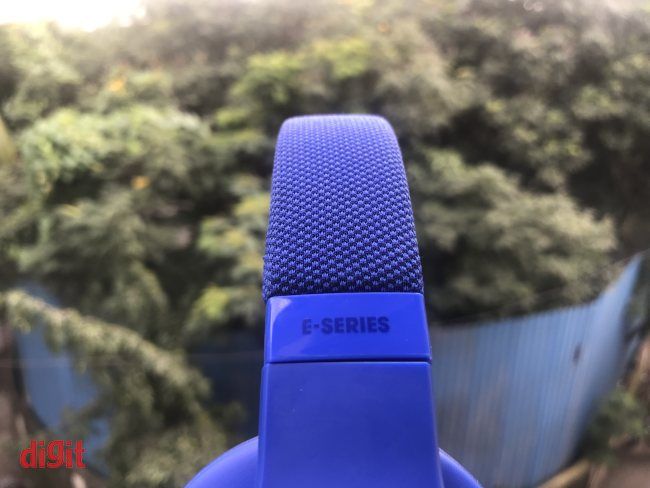 The best part about the E55BT’s design is the flexibility of the ear cups. Both ear cups rotate approx. 90 degrees along the vertical axes to make it really easy to put them flat on a surface. Along with that, it is also possible to fold them inwards towards the headband, making it a really compact unit that can be comfortable stuffed into most bags without the fear of breakage. 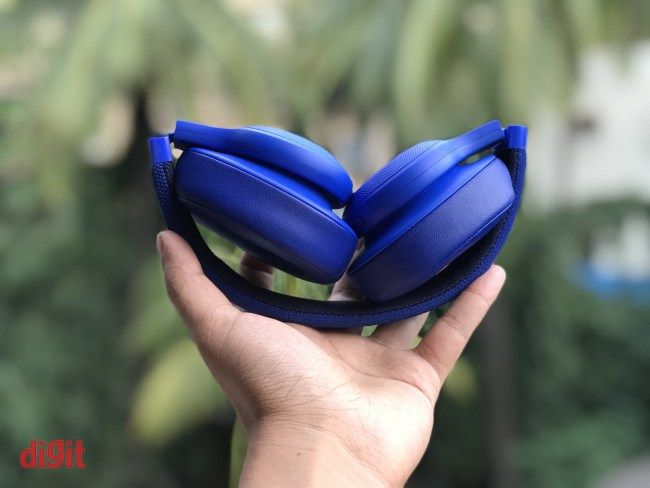 The foam earpads themselves are quite comfortable and allow a good, if uncomfortable, level of passive isolation, which we will talk more about in the performance section. The buttons are all present on the right ear cup while the charging port is present on the left. For the buttons, you get a power toggle that flips back into position each time you use it, below which you get the three playback buttons for volume up (also next track), play-pause (also call accepting and disconnection), volume down (also previous track) in that order. 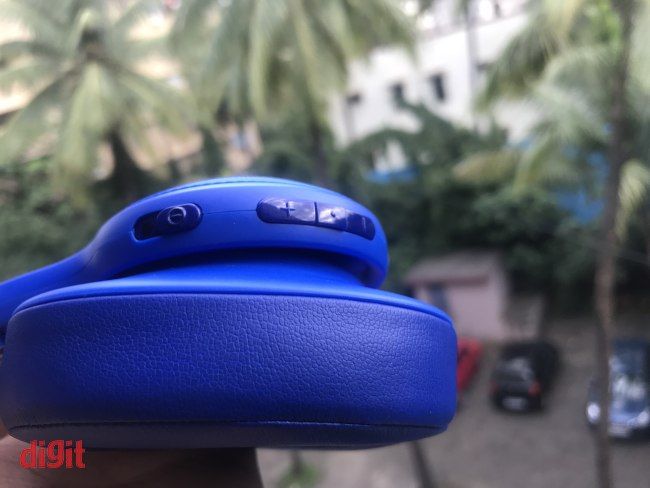 The power toggle, on the left

The power toggle also has an LED on it that indicates the ‘powered on’, ‘paired’ and ‘pairing’ states. Below that, there’s a third button with the Bluetooth icon, which, essentially, is the pairing button. You need to long press that button for the headphones to be visible on the Bluetooth pairing menu for any smartphone or audio playback device. 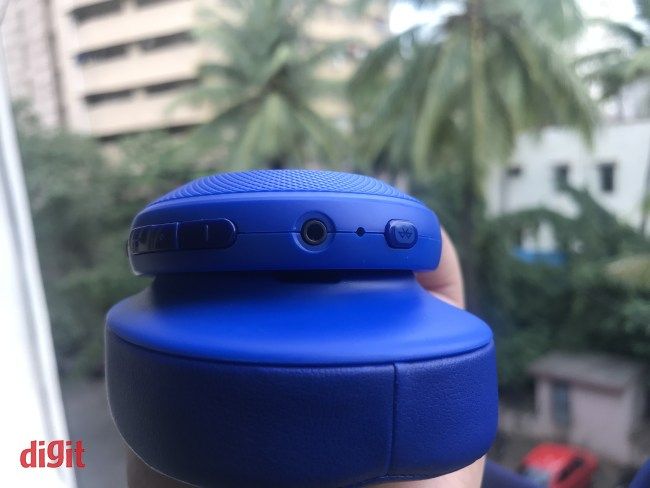 While there’s nothing wrong with that, most headphones achieve this through one power button that needs to be long pressed for Bluetooth pairing and the E55BT seems to have gone for a redundant approach with the dedicated Bluetooth button. The positioning of the buttons is ergonomic, even if it does appear to be confusing in the beginning. They’re placed at the most natural region on the ear cup for the thumb to reach, and once you’ve familiarised yourself with the order of the buttons, it doesn’t seem too weird. However, that being said, buttons could have been distinguished better, especially the ones paired together. 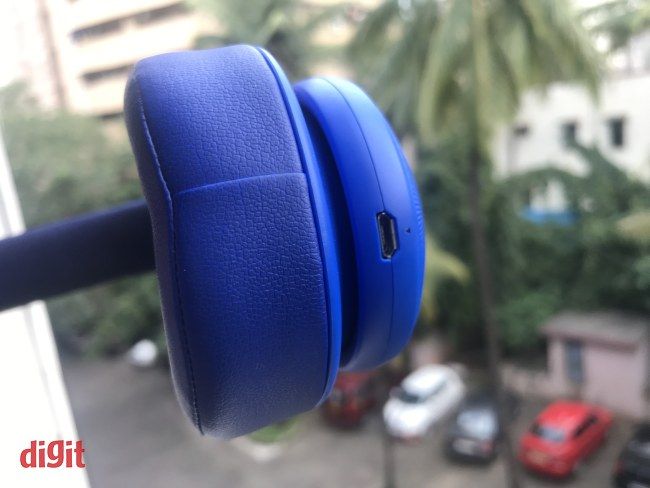 There’s also a 3.5mm port for the included wire to be used in the wired mode. The wire itself is fabric sheathed and has an angular 3.5mm jack at the end and a controller with a singular button. The angular jack is a thoughtful inclusion since it helps avoid tugging and tangles at most angles. That, along with the fabric sheath, makes the included detachable wire an asset. We’ll talk more about the wired performance in the next section.

The feature set offered by the E55BT is pretty standard, save for the ability to pair it to multiple devices at the same time. In fact, this might be one of the most unique features that we’ve encountered at this price point. 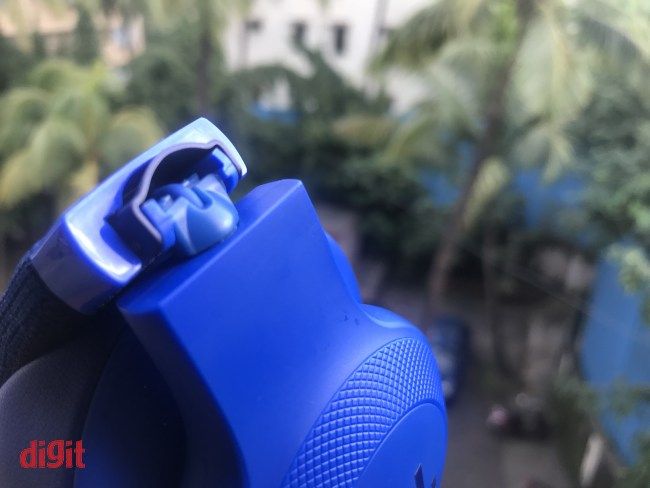 The hinge mechanism on the E55BT is also all-plastic

This feature allows you to keep two devices connected to the E55BT at the same time. What’s the point, you say? Imagine you’re using your phone to listen to music while you’re having a heated debate on Facebook from your laptop - both of the devices connected to the E55BT. Now, after the debate has concluded (satisfactorily, we hope), you need to blow off some steam by watching a funny cat video on YouTube on your laptop. All you’ll have to do with the E55BT is stop the playback on the phone and start the playback on your laptop for the audio source to change on the fly. This feature works between phones either on Android or iOS but not between an Android and an iOS device. Keep in mind that particular devices might also not be compatible with this feature. 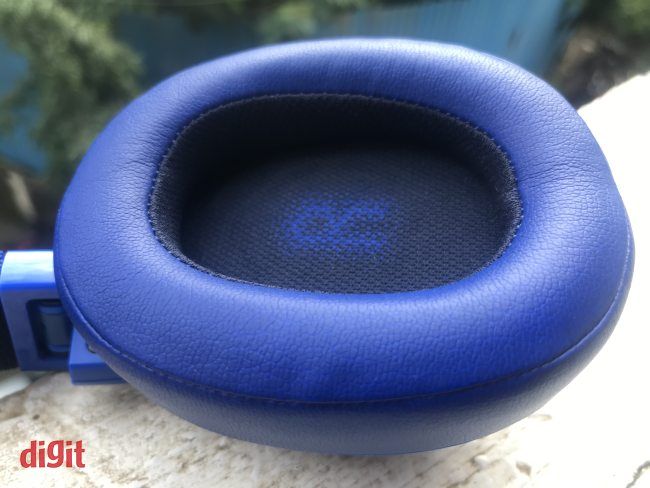 Isolation on the E55BT is debatable. While the foam earpads muffle out external sounds significantly, making them nearly undetectable even during particularly noisy public transport rides, the music does leak out significantly, to the point where the person sitting next to you can recognise any track you’re playing above the 70% volume level. On the other hand, there’s a particular sense of suffocation involved in listening to music on the E55BT, which makes it seem like your ears emerged out of the water each time you take it off. 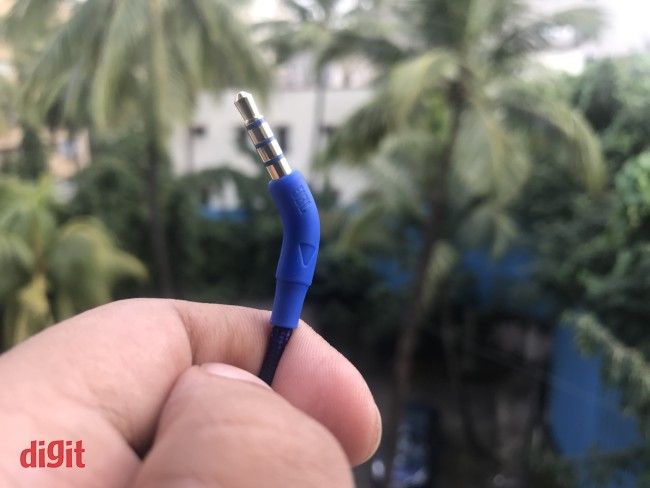 The E55BT doesn’t lack power even by a far margin. Putting your phone’s output at 100% as well as the headphones might actually feel painful on high-intensity tracks like Back in Black by AC/DC. Bring things down to the 75-80% range and you should be fine. The sound signature of the E55BT leans towards the warmer spectrum of sound, but in a good way. Call on Me by Chris Rea is a track that has very distinctive vocals by the singer. While the bass drum and guitar in the song are clearly a notch above the vocals on the E55BT, they don’t blur it out entirely. However, a more balanced output where the vocals got their due credit would have been more appreciated, instead of the crowd-pleasing bass boost that is present now. 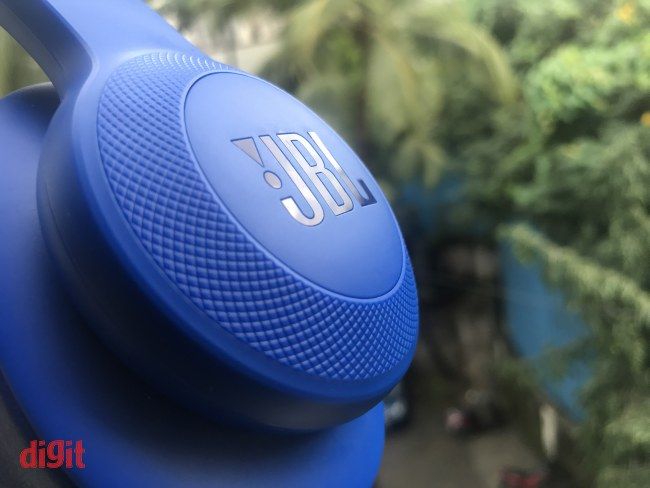 Instrument dense tracks like Centuries by Fall Out Boy and Pull Me Under by Dream Theater are also reproduced well, considering the price point. Don’t get me wrong, the bass is also more than ideal, but it maintains a better grip than what we’ve experienced with a number of over-the-ear units off late. While the treble performance on the E55BT is much brighter than, say, truly the budget-bin lot of headphones like the Ant Audio H82 Treble, it is not noticeably sweet or detailed either. There seems to be just the right amount of curtailing to put it right behind the bass. The twang at the start of Mindstreet by Motherjane is still there, but you can’t ignore its lacking nature if you’ve heard it on units with more accurate audio reproduction. 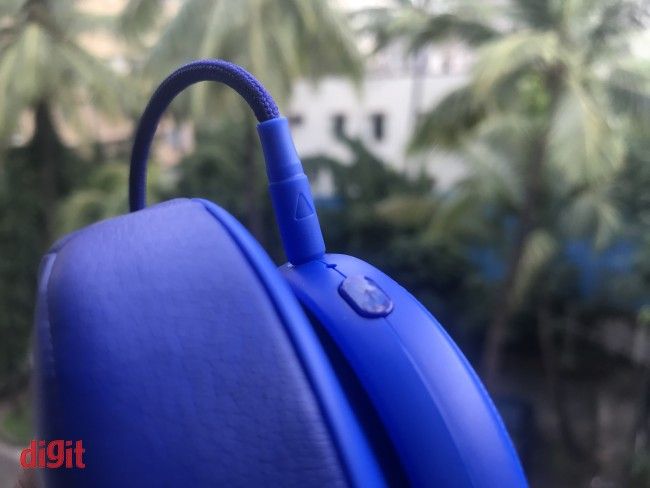 Performance with the 3.5mm jack is quite poor

Overall, The E55BT performs best on electronic tracks where the tonal variation in the instruments involved is not much, so it was a natural on tracks like Uptown Funk by Bruno Mars. On tracks like Selkies by Between the Buried and Me, you can notice the bias towards the warmth in the lower and mid-range of the music, while also spotting the clarity that it tries to maintain in most of the high notes. The E55BT is by no means a bad choice for its audio performance.

It is often quite hard to get a good pair of Bluetooth headphones at an affordable price tag. Most decent pairs shoot up to a pricy perch the moment a tag of ‘Bluetooth’ is attached to them. The JBL E55BT manages to tick a lot of right boxes without following a similar rise in price. At <7k during the review, it sports a fairly decent design for its price point. Apart from the thoughtful portability features, investing a little bit in the materials used could really make it a true steal at this price. When it comes to audio, if you can look beyond the warmth in the E55BT’s signature, it is a fairly well-balanced pair of headphones, even with the lacking power that comes in the wired mode. Give this one a shot if you’re looking for value for money under Rs.7000.