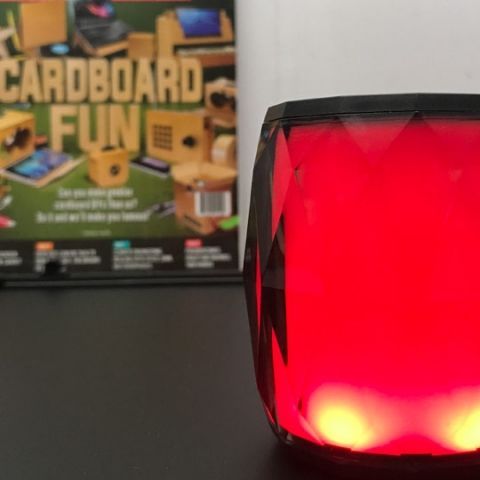 The F&D W8 is a budget Bluetooth speaker that comes with a unique design sporting a transparent polygonal exterior that is lit up in several colours by LEDs. However, the build could have been made better with stronger materials and a better finish. The audio performs well on simpler tracks and average volume levels and loses clarity and quality as the complexity and power are pushed higher. It is a good deal at the current lowest price of Rs. 1400, however, don’t expect anything more than average performance out of this visual package.

As components become cheaper every single day, and the smartphone accessories market gets more crowded, it is expected that manufacturers will try everything to differentiate their products from the rest of the lot. When it comes to Bluetooth speakers, there’s a lot of things going on across the spectrum. While higher-end models from big names are adding the smarts with supports for assistants like Alexa, Google Assistant and Siri, more affordable alternatives are trying interesting things with their feature set and design to stand out. One such product, the F&D W8, landed up at our test labs recently. Is it worth your money? Let's find out.

In terms of overall size, the W8 follows the trend of recent pocket-friendly Bluetooth speakers. With a profile that resembles a normal coffee cup, the W8 has been designed to stand out from the ground up, quite literally. The exterior sports a transparent polygon design made almost entirely out of plastic that is meant to showcase the colours that the LED lights on the speaker glow with. While it does add to the visual appeal of the speaker, it is not that durable and is quite scratch prone and fingerprint prone. You might find yourself cleaning it a lot, and tossing this one into a bag with metallic objects could spell bad news for the plastic exterior. 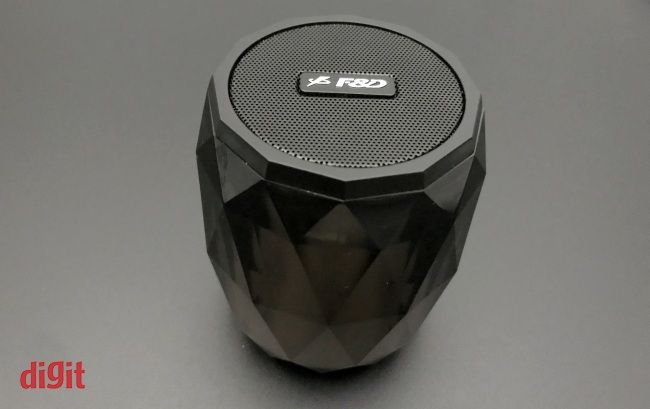 The quality of the finish on the polygon structure is well done. However, the same cannot be said for the metallic grille at the top, through which its 2” 4W neodymium drivers push the sound. You can spot a bit of rough metalwork around the plastic piece carrying the F&D logo and at the edges where the metal meets the dodecagonal outline of the top face. On the bottom, you have the buttons and a hook for the lanyard. 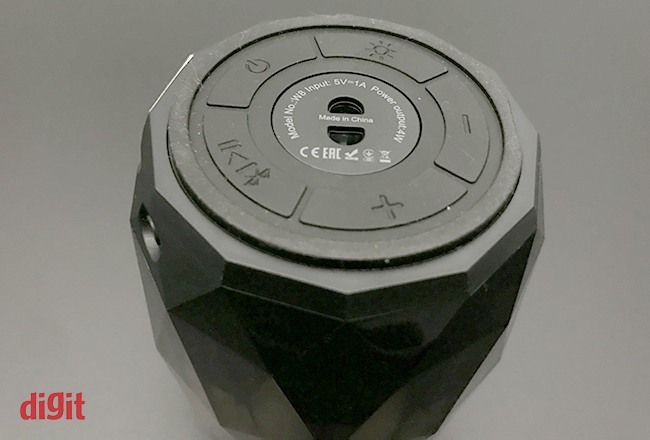 The five buttons control the playback, pairing, volume and the lighting modes for the W8. While the rubber finish on the buttons makes them soft to touch, a button press is still quite clicky and there’s an audible plastic sound each time you press them. We also have an issue with such speakers placing their buttons on the bottom, requiring you to pick them up each time you want to do something as simple as bringing the volume down. 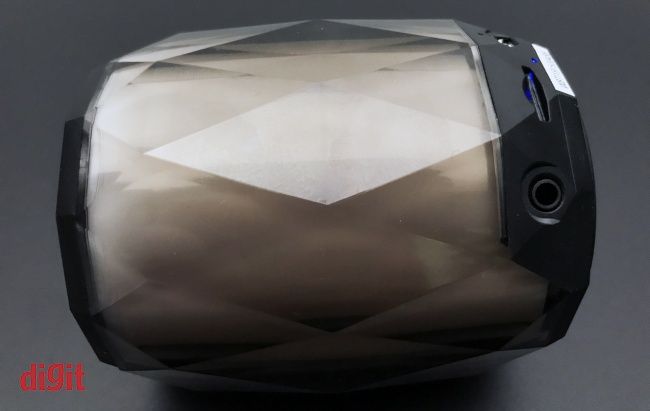 The lanyard hook on the bottom also makes for a weird choice, since having the string on it all the time would make it impossible to place the speaker flat on a surface, spoiling the already dubious grip that the rubberised bottom has. The light switch takes you between seven colours that dim periodically, an eighth click taking you to an alternating colour mode and the ninth switching off the light entirely. 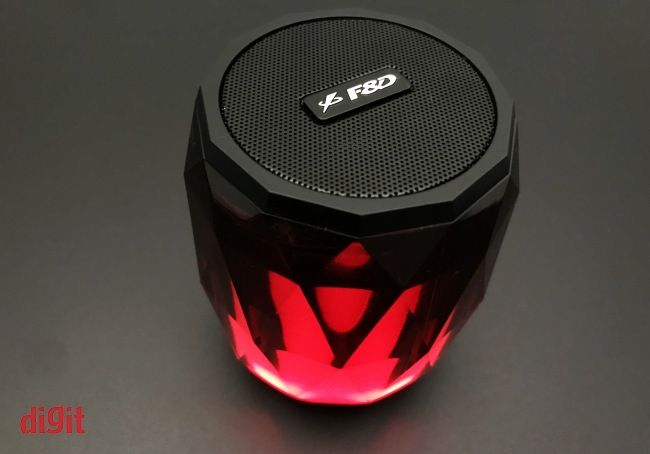 The lighting is independent of music playback or pairing and allows the W8 to function as a soothing bedside lamp. As we’ve said on multiple occasions, this does not impact the W8’s performance at all - which, to be honest, could use some help. Additionally, beyond Bluetooth, the W8 supports Aux-input as well as micro-SD card as input.

The audio performance of W8 implores you to remember its price at all times. The speaker brings to mind competitors like the Sound One Rock, which sport quite powerful outputs, if not better audio quality, at a similar price point. 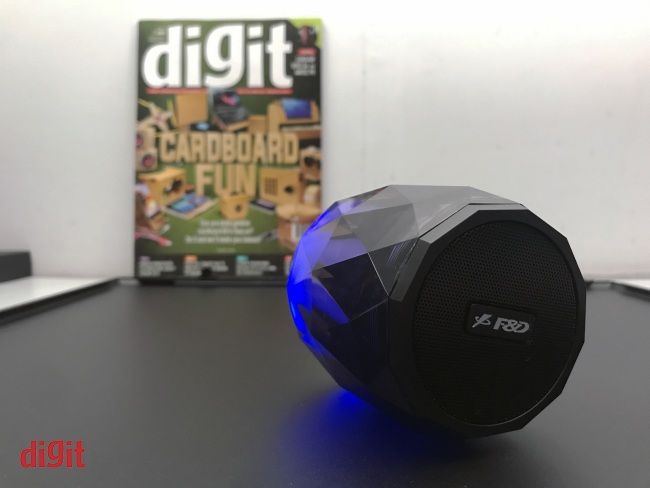 Pushing pop tracks like Uptown Funk to the W8 goes from a powerless mumble to full-fledged distortion land within 10% volume change in the 60-70 range. However, on tracks like Chris Rea’s Call on Me, the W8 outshines the Sound One Rock with better clarity on Rea’s voice and lower priority for the drum in the background. 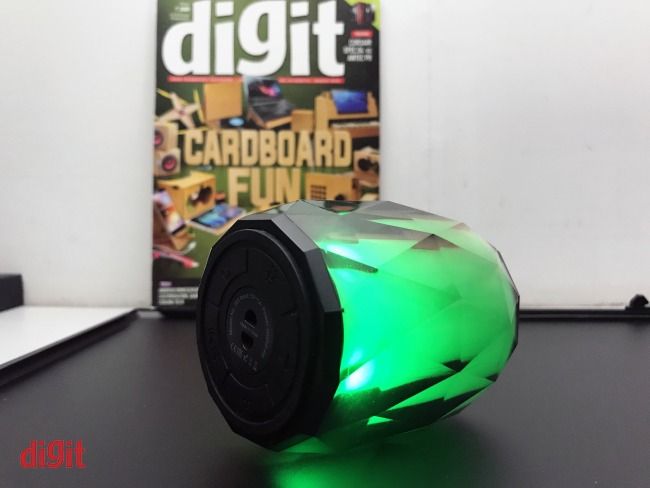 On instrument dense tracks like Centuries by Fall Out Boy, the output is harsh and the highs suffer significantly from treble peaking at about 70% of max volume. Pushing the volume higher makes the song sound like a garbled mess and painful to the ears. On the other hand, tracks with greater clarity like Hotel California fare much better due to the W8’s focus on the mids and sub-bass. Overall, the W8 leaves little to no impression in the audio department and settles for average performance that relies on its unique design to be desirable.

The F&D W8 isn’t anything more than a budget Bluetooth speaker, and it doesn’t pretend to be. The unique design that aims to highlight its LED lighting functionality could have done with a touch of quality, as it is doubtful that the current material will survive a few tumbles from a desk or a number of rounds in a bag in public transport unscathed. The sound has its pros and, mostly, cons but considering the ongoing price of about Rs.1400 the W8 isn’t a bad purchasing decision unless you happen to be biased towards bass. In that case, the competing Sound One Rock is a better choice.