The Epson Eh TW-650 brings with it fantastic performance with great colours and contrast, be it gaming or watching movies and TV shows. It has 2 HDMI inputs, which is nice, but we wish it had more audio output options. Turn down the lights and you will love the performance of the projector. If you are looking to build a home theatre setup or simply looking to test the projector waters without breaking the bank, then you can definitely consider this one.

One of the key decisions to make when building a home entertainment system is whether to invest in a projector or a large screen TV. While TVs have been getting better with backlighting technology, going beyond the 55-inch screen size can be an expensive affair. Projectors, on the other hand, though expensive, can give you a really large screen viewing experience when compared to TVs. However, till some time ago, to truly enjoy a projector, you needed to dim the lights, connect a set of speakers and ensured you invested in a screen. There is also the debate on whether to go 4K or stick with 1080p when it comes to a projector. While we have reviewed the BenQ W1700 Projector which is a 4K projector and you can read our review here, the price is almost the same as a 55-inch 4K TV. Today we have with us the Epson Eh TW-650 – a Full HD projector priced at Rs 58,990.

Speaking of the build of the Epson Eh TW-650 projector, it is all plastic with the connectivity options neatly laid out at the back. At the top, right in the front, you have a sliding door to project the lens. You also have the focus and zoom toggles here. The top of the projector also houses all the buttons such as home, source, power, menu, volume, enter, escape and keystone adjustment. The ports are neatly laid out at the back. In terms of connectivity you have a USB-A and one USB type-B port. You also have the traditional RCA input along with a VGA port and an HDMI port. The connectivity options are plentiful, but I do miss the audio out options. Not having a home theatre setup, I would have liked to be able to connect my speakers to the projector via 3.5mm or RCA or optical or some other standard. Granted, most people that invest in a projector are looking to pick up an AV receiver or a soundbar with ARC to help with this problem, but some old school audio out would have been appreciated. 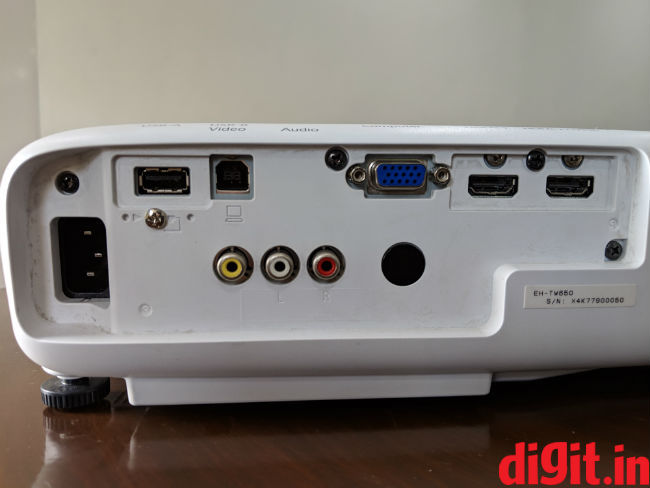 Coming back to the build, it is what you’d expect from a projector - sturdy plastic all around, vents for cooling and adjustable legs in case you decide to place it on a table top stand. The projector is light, weighing less than 3kgs, making it portable in case you decide to put it in your bag and carry it with you. It isn’t portable per say, put you can carry it around if that’s something you want.

Overall the build of the Epson Eh TW-650 is simple, strong plastic with almost no flex all around. The only qualm I have with it is the lack of audio output options.

The projector comes with a remote control in the box and the projector itself has an IR receiver at the back and in the front. This makes it convenient to use the remote control by pointing it in the vicinity of the projector and not pointing at it directly which is convenient. The remote itself is traditional in design. It is thick which adds to the grip and all the buttons are neatly laid out and easy to reach with one hand. You have controls like the source on the top, followed by playback controls and the menu along with navigation and other settings. The buttons on the remote are rubbery and get the job done. It is functional, which is what matters in this case and I only wish it were backlit. This would make it easier to use in the dark. 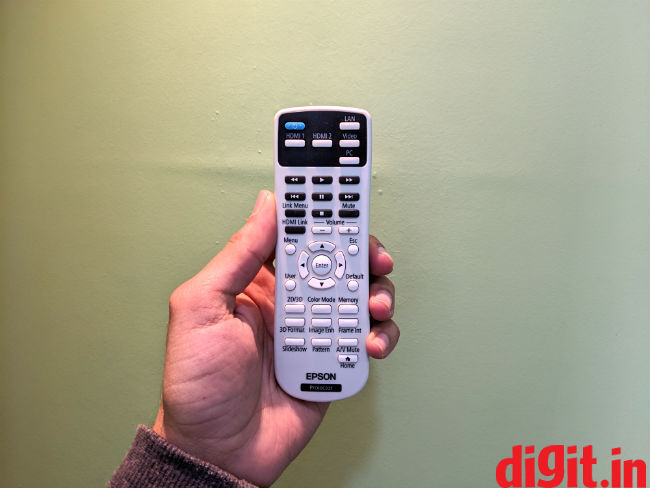 When it comes to the performance of the projector, it is an absolute beast, especially when the lights are out completely. Switching the lights off in our studio in office and projecting the content on a matte white wall, people came up and asked me if this was a 4K projector. The screen size was close to 80 inches and when I said no, people were taken aback. That is the best way to describe the quality of output from the projector. The Epson Eh TW-650 uses 3LCD technology to illuminate the image in place of DLP which we saw on the BenQ. W1700. Now, even though both technologies have their advantages and disadvantages, what 3LCD brings to the Epson Eh TW-650 is better contrast, good back levels and the best part, changing the lamp will cost you a mere Rs 5,000. Epson says that the lamp life is about 4500 hours in normal mode and 7000 hours in eco mode which is a lot.

For the process of this review, we played a lot of content from our Xbox which included content from Amazon Prime, Netflix and even connected a Fire TV stick to watch some Hotstar. Gaming was of course another field we tested the projector in. 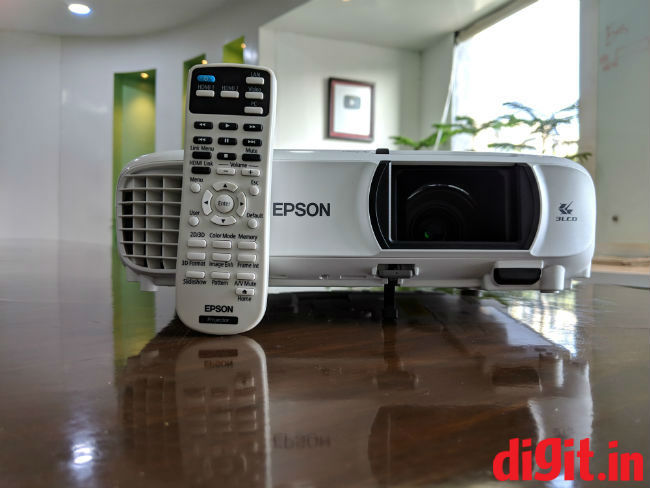 When it comes to content from Amazon Prime we saw some Young Sheldon, Spider-Man Homecoming and Wonder Woman. All the content exhibited excellent colours especially in Spider-Man Homecoming. The sequence where Spidey saves his friends from the fallen elevator looked very vibrant exhibiting the blues, reds, yellows and all the shades in between very vibrantly. Since there is fast moving action in the sequence, there was no blurring whatsoever and with smooth transitions between scenes.

When it comes to Wonder Woman, the movie itself has a dark gritty tone and that is represented well. From the skin tones to the gritty war-torn cities, the content looked rich on the 80-inch screen. 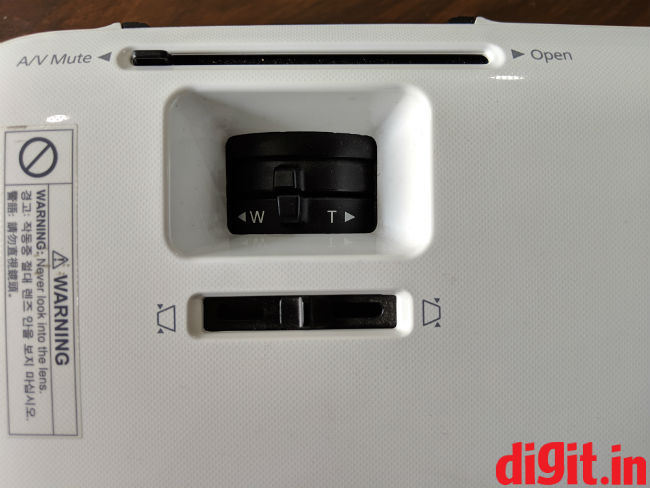 Moving to some dark content we saw the John Wick – the Red Circle sequence in particular and Dare Devil Season 2 Episode 3 staircase fight sequence. The staircase fight sequence had better contrast and colours than some mid ranged HDR TVs that we have tested and that is saying something since the content we were consuming was not in HDR. Even in John Wick, the blood splatters from headshots to the expressions of the henchmen when their bones we breaking all were clear as day.

Needless to say, the projector does extremely well especially when lighting in the room is very little. All this time we were using the dynamic picture preset which reduces the brightness and keeps contrast high to make the colours pop. This effect is somewhat lost when there is light in the room but not to a degree I thought. Sure, John Wick and Daredevil suffer when light enters the room especially when it hits the screen but more than colour it is the contrast which takes a hit. This is a projector you can enjoy when the sun goes down. 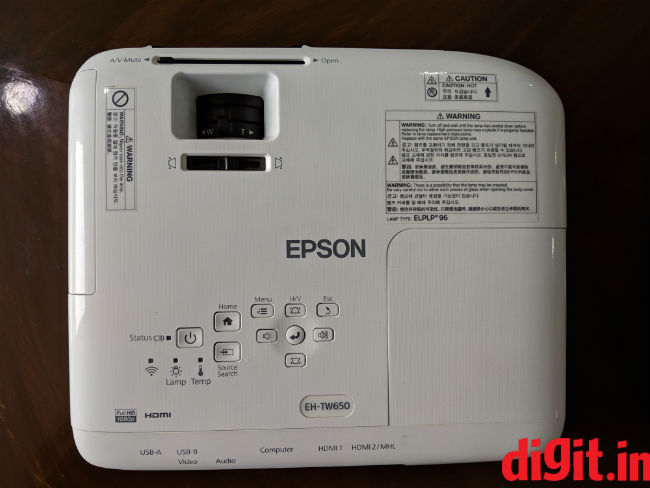 Moving to gaming, it is a treat. After people left office, I fired up Ashen on the One X. The game isn’t a graphical powerhouse but has a very nice colour pallet with lush forests and some dark caves and caverns. The dark caverns house monsters that spring from the dark and the contras here was good enough that I only saw the monsters when the game wanted me to see them.

Games like Doom which need you to be on your toes and Forza which needs precise steering controls, are a lot of fun and immersive on the large screen.

Overall, know this. The performance of the projector is fantastic. The colours are vibrant and the contrast is good. Even if there is some light in the room, you can still enjoy it. But it isn’t one to be used in the living room in daylight. You will need to invest in thick curtains. 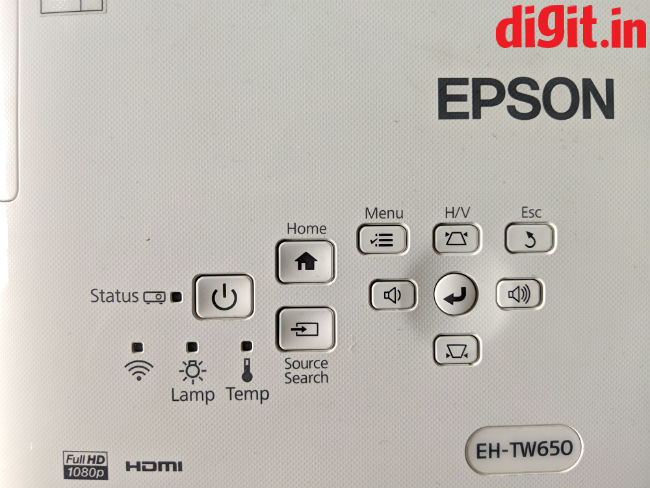 Projectors generally don’t come with speakers yet in the past we have seen a few launch that boast of some basic audio capabilities. The speaker on the Epson projector is a mere 2W speaker and its performance is lacklustre. At full volume, the audio screeches, dialogues sound muddled especially when there is music in the background at the same time. There are a lot of good FHD and even some 4K TVs available in a budget of 60 to 70k. However, what you won’t get is a large screen size. The Epson Eh TW-650 is a fantastic 1080p projector for the price. We blew it a little over 80-inches and the experience was cinematic in every yay. The colours are good, contrast is deep, and the projector is very silent. The only downside is that you wont enjoy it in a room where there is light and we wish the remote control were backlit. If you are in the market to pick up your first projector or are looking at investing in a projector for your home theatre, then yes, you can consider the Epson Eh TW-650. Be it on a wall on a screen, you will enjoy this one. 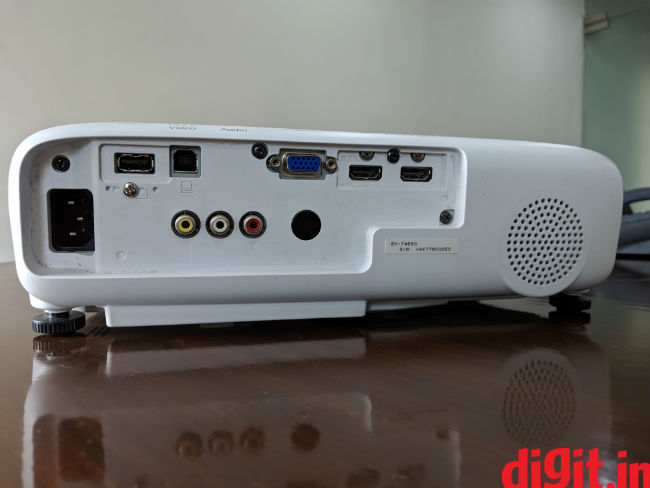