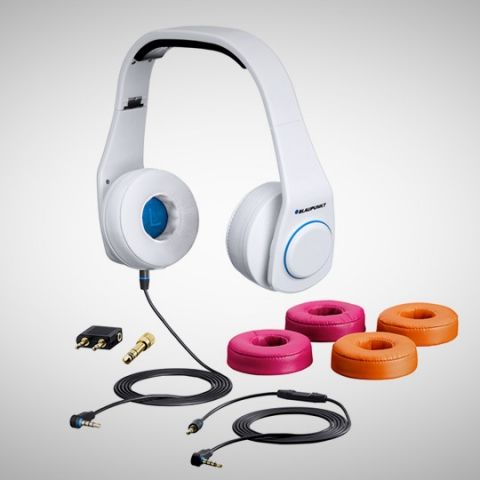 With a funky design and tons of features up its sleeves, this headphone is definitely a conversation piece if you ever happen to own one. The sound signature is sharp and the bass is on the heavier side. The vocals sadly sound a little recessed but its design, features (such as daisy chaining other headphones, colourful bundled changeable earpads) and overall performance make it a recommended purchase.

In a market that seems to be ruled by the likes of Beats by Dre and Skullcandy, other brands (that have a bit of audio heritage on their side) are trying to come up with products that have a more personality and charisma. Manufacturers are experimenting with vibrant colours, trendy designs, switchable pads, customisable skins and the likes. The Blaupunkt Style too is one such attempt at packaging great audio in an attractive package.

Design and build
The packaging certainly had a premium feel to it, which continued on to the headphones which we’ll get to later. As for what’s in the package you get a soft case, airplane adapter, a 6.3mm adapter, two cables – one with in-line microphone and Apple-compatible volume/call answer buttons, and two ear cushions in different colours. The cushions are neon shades almost fluorescent donuts. If you get bored of a particular colour you can easily swap in another one. The cushions make for an over the ear or supra-aural fit. And although they’re soft you’ll need a bit of rest during extended listening sessions.

The left and right indicators are placed right inside the earcups in large fonts making them a functional design element. One of the more interesting features found on the Blaupunkt Style is availability of an aux out. Either of the two plugs can become an out depending on which side is taking the input. This lets you daisy chain another headphone and effectively share your music. They’re built quite well and the headband adjustment mechanism seem sturdy enough and it doesn’t interfere with the folding mechanism. Being on-ear they do manage to cut out a lot of ambient noise as well.

Performance
The moment you put it on you are hit by the sharp sound signature. The vocals sound recessed almost like they’re echoing from a large hall. At the time of testing this set, we had a lot of headphones in the test labs. Of all the ones we had, the Blaupunkt Style went head to head with the Ferrari R200 in terms of form factor and cupping design – both are supra aural. While the Blaupunkt renders highs better, the R200 was more refined. Plus the Blaupunkt Style is a little too bass heavy for our taste but we’re pretty sure it’s going to be a hit with bass junkies.
The headphone was not entirely free of flaws: we can’t exactly pin point which frequencies it messed with, but the vocals sound pretty strange. While the headphone scored very well on our guitar test tracks when playing While My Guitar Gently Weeps – Santana feat. India Arie the vocals went for a toss, sounding flat. Certainly India Arie isn’t nasal, right? So despite the score, it takes away from the overall experience. Sonically, it sounds very similar to the Martin Logan, but the Micros 90 leans more towards the neutral side.

Verdict
Its design, performance, features (like daisy chaining other headphones, colourful bundled changeable earpads) and overall performance make it a recommended purchase in the mid range category. The MRP is 14,990 but we found a few listings online where you could get them for Rs. 12499. If you want something flashy with decent audio go for it. If you want slightly superior audio but with understated looks go for the Harman Kardon CL (it’s cheaper too).