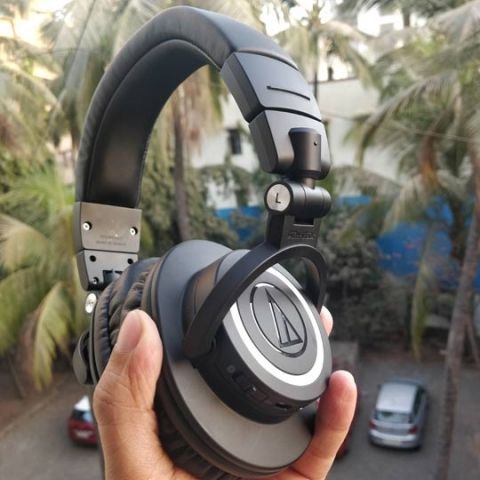 Years after it kick-started the M50 series, Audio-Technica has released the ATH-M50xBT, the wireless version of the highly popular ATH-M50x. These headphones boast of massive battery life, sound quality that is a lot of fun and a decent build. Even the absence of features like noise cancellation tends to get ignored due to better isolation, and the inclusion of Bluetooth 5.0 and aptX support. If neutrality in sound is a must for you, even at the cost of power, go for the Grado GW100. If noise cancellation is a must, alternatives like the Sony WH-H900N or the Sennheiser 4.50 BTNC make more sense. However, if overall performance is what you appreciate, the ATH-M50xBT far exceeds expectations.

To give you an idea of how long it has been since Audio-Technica launched the original M50, it followed the announcement of the first iPhone by approximately a week. Fast forward to 2014, they upgraded the design and made the cables detachable with the M50x. Flash forward again to 2018 and they’ve ditched cables altogether with the M50xBT that claims to have the same signature sound experience that made its predecessors popular in the first place. Launched recently in India, the M50xBT is currently going for a little more than Rs. 17000, which might warrant a few eyebrows considering the wired version is selling for a few bucks shy of Rs. 10000. Is the M50xBT a worthy wireless choice, and maybe even a worthy upgrade? Let’s find out.

While we will discuss the build of the headphones in the next section, we might touch upon some aspects here to make sense of the accessories as well. You get a 120cm long cable which is pretty much the standard when it comes to headphones to use with your smartphone. The quality of the cable is also fairly standard, with an L-shaped connector on one side and gold plating on both ends. One remarkable thing about the cable is that it comes with an inline module with a mic and controls of its own. We’ll get to how good they are in the performance section. 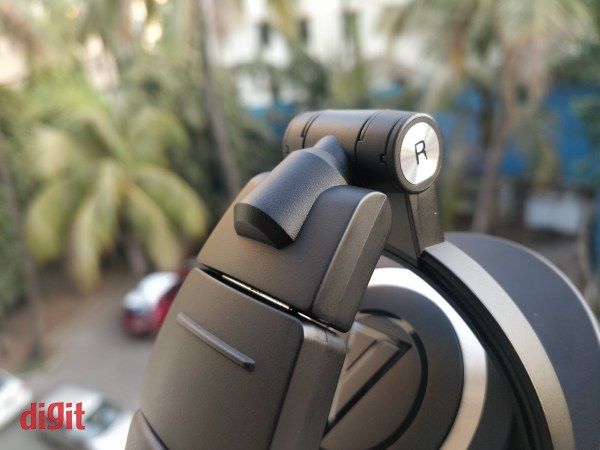 The charging cable is quite short, so you’re probably better off using your own micro-USB cable. USB-C would have been a better choice here, considering that it reportedly takes 7 hours to take the pair from zero juice to fully charged. There’s a carrying pouch that is barely big enough to pack these in their folded state but helps regardless to maintain the smoothness of the plastic body when stored inside your bag.

In many ways, the M50xBT is identical to the M50x when it comes to design. In fact, it might be difficult to tell the Bluetooth version from the wired one, considering that even the inscription below the earcup hinges just says ATH-M50x. Which means that the designers have done a great job of keeping the original shell as is while managing to fit more components inside it in the form of a battery, Bluetooth components, button controls etc. 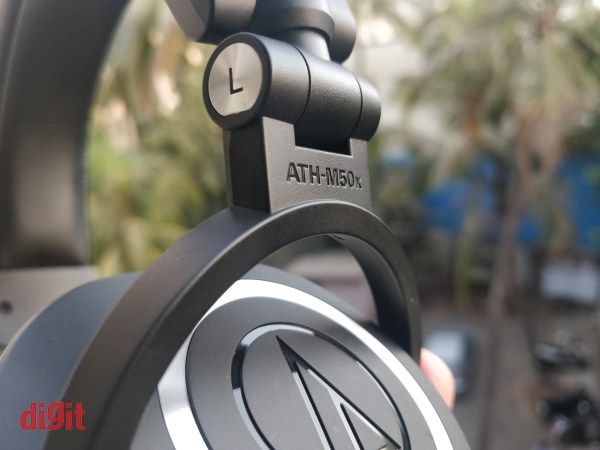 The earpads are well-padded, which is something of a signature feature of cans meant for the studio. The plastic used on the headband and the earcups are also of good quality. The only places you’ll find metal on the headphone are inside the headband as well as accents on the outside. The latter is probably to break the all-black design for visual relief, however, that also works in creating a no-nonsense industrial look that gives this headphone a timeless appearance. 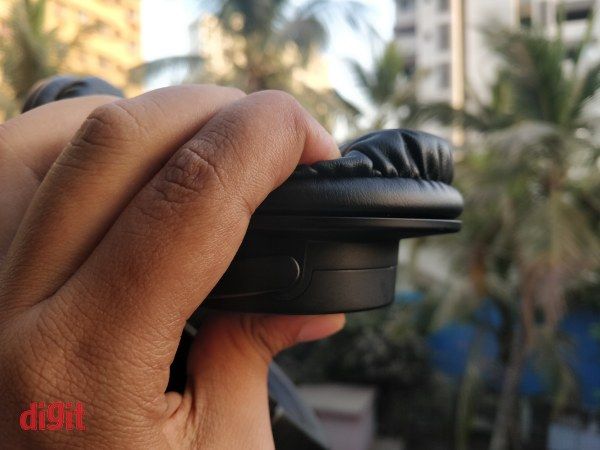 While the earcups offer ample padding, the space inside them can be limited to people with bigger ears like the reviewer. Without being outright painful, the insides of the earcups can get really warm over longer listening sessions, leading to fewer of those happening eventually. On the other hand, coupled with the well-padded cups, this offers superior isolation, which is something you’ll need since there is not ANC on board. The cups also fold inwards up to 90 degrees and rotate as much to the sides as well, which makes them portable despite their unwieldy unfolded state. Thanks to the metal in the headband as well as the quality of the plastic, the M50xBT can survive a lot of twists and pressure inside your bag. In terms of comfort, the clamping force might seem high initially but eases over time, until its just the right fit in about a week’s time or so. 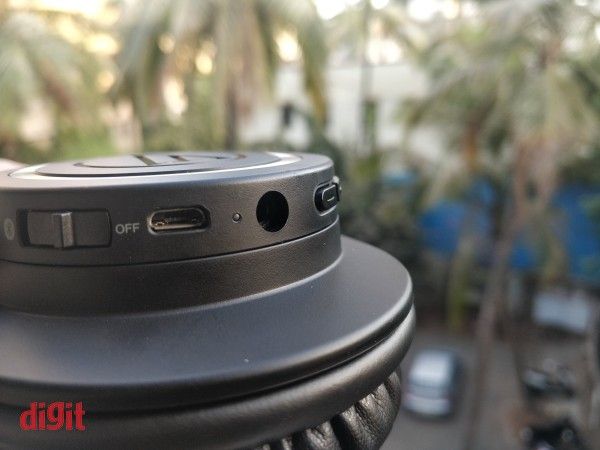 All the buttons are present on the left earcup. Starting from the top at the back you have the volume-up, play-pause and volume-down buttons in a cluster, which also double up as the playback and call control buttons as well. Just below them, you have the 3.5mm Aux-in port, followed by the micro-USB charging port, and the power button. Additionally, there’s a touch panel on the left earcup’s face to trigger the voice assistant on your phone. Why couldn’t the play-pause functionality at least be integrated into the same touch-interface? Well, honestly, we do not know. The buttons that are there are easy to reach and quite intuitive, despite seeming confusing initially. 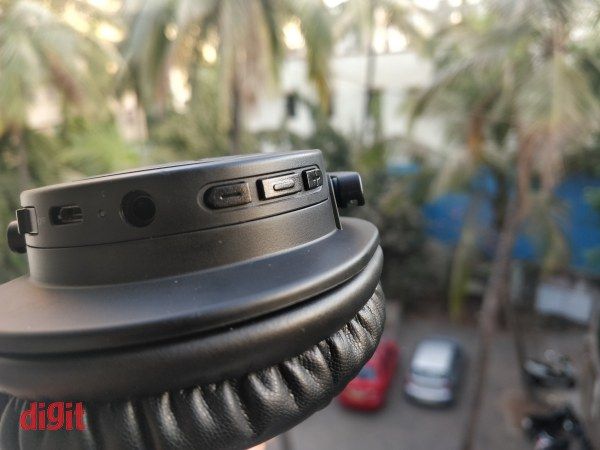 After an easy setup and playing around with the design of the M50xBT comes the actual listening. These wireless headphones have a sound that veers more towards popular appeal than studio quality. The 45mm drivers and the support for aptX combine to aim for high-end sound on a budget. While they never really come close to being recommendable for studio mixing, they’re quite great for listening on the go and at home. 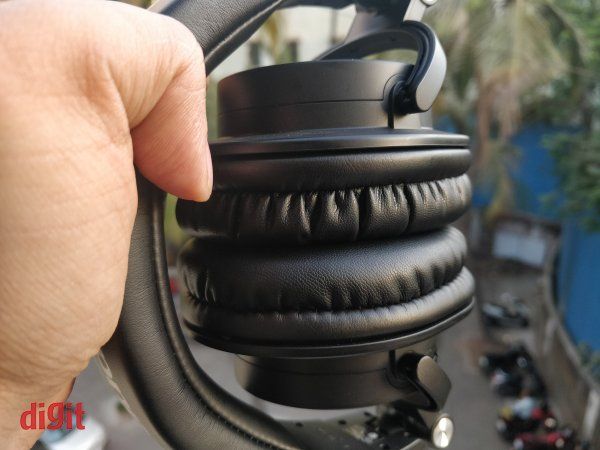 Authenticity is not on offer here. Rather, the signature leans towards the warm side with slightly boosted bass notes that sometimes take the forefront regardless of their importance in the particular track. This is particularly evident on tracks like Call on Me by Chris Rea, where Rea’s gravel-like voice quality, retained in the M50xBT’s presentation, is supposed to be up front but the beats end up overshadowing them on the M50xBT, making you strain to hear it. Essentially, expect a little more ‘thump’ than the usual. Bass heavy tracks are a delight without being overpowering, like Starboy by The Weeknd sounds just the right amount of seismic without masking anything that makes the song great. This tendency also comes to favour another shortcoming of the M50xBT - the absence of noise cancellation. 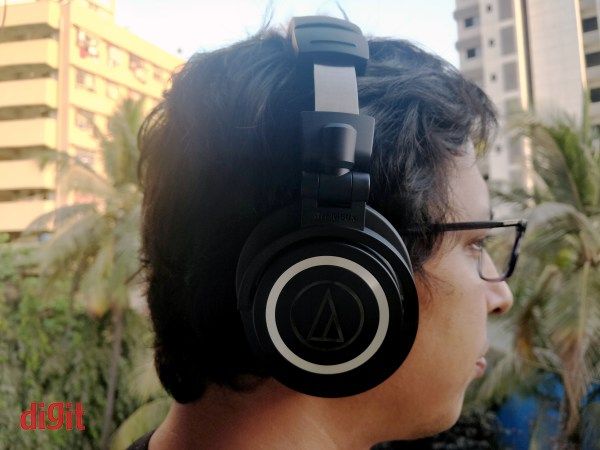 The mids are pretty great when they’re not being overshadowed by the lows. During the opening of The Chain by Fleetwood Mac, the acoustic guitar is wonderfully rendered, with great tonal accuracy. Adele sounds powerful and bold on Hello, without any of that low-end overshadowing being spotted here. Imaging is good, if not great. The soundstage can be a bit limiting in the Bluetooth mode, whereas the stage seems to expand when connected with the included 3.5mm wire. When it comes to the highs, the M50xBT plays it safe, but boring. Don’t expect the upper frequencies to dazzle you, but don’t expect them to sound harsh or tiring either. 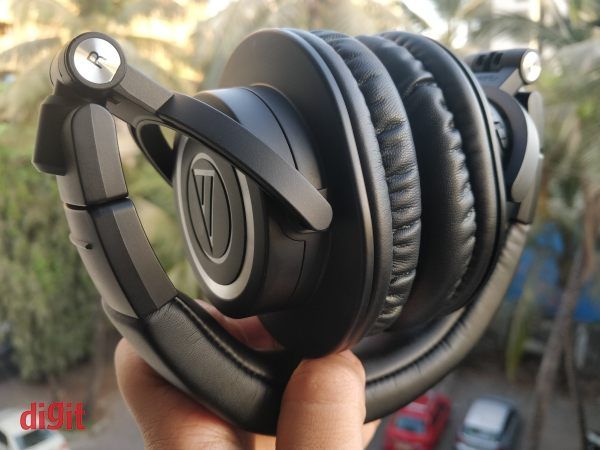 In terms of connectivity, the M50xBT gave us a great experience. Walking around an entire apartment only saw connection drops at least two walls apart, where most headphones cannot hold a connection flawlessly when the line of sight is broken by even one wall.  Even on a crowded bus in Mumbai, using the onboard microphone to take calls threw no problems at us. Watching videos is also not an issue thanks to the supported codecs, which avoid issues like lag which is seen in many competitors. Audio-Technica claims a battery life of 40 hours where we managed to get more than 30 hours on every charge quite easily. The touch interface on the left earcup fails a lot though, and even when it does work, the amount of time it takes to wake the assistant just makes a voice command the better and faster alternative.

If industrial design, a stellar battery life, a not so accurate but fun sound signature are things you would like in your next pair of wireless headphones, the ATH-M50xBT from Audio-Technica checks all of those boxes. Without paying too much attention to sounding neutral, the M50xBT is definitely not for studio usage. While noise cancellation would’ve made a difference with the portable pitch, but the passive isolation these cans offer is quite great. With Bluetooth 5.0 and aptX support in the mix, the M50xBT is definitely worth your money.