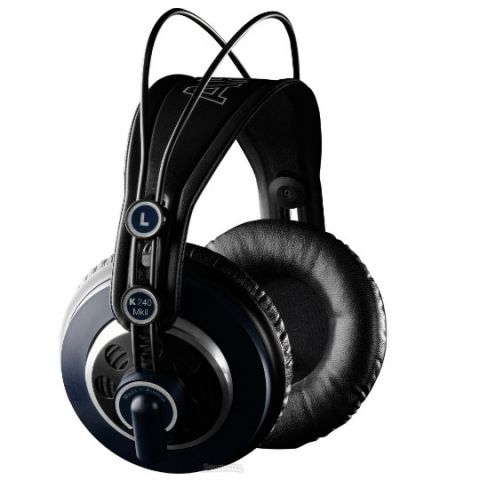 Over the years, different variants of the K240 have garnered a reputation of being the base-level standard when it comes to studio monitoring headphones. Budding audiophiles the world over take their first steps into serious listening with these headphones, and for good reason. Find out why.

Often times professional monitoring equipment can make for some great audiophile gear. The AKG K240 MKII is one such case in point. It comes from the reference line of products from AKG and unlike most reference "grade" products, this one is actually used in studios along with the other popular model in the series – the AKG K271 MK II. At the time of review we had both these sets with us and through this review you'll find a lot of comparisons being made. Though what we found was fairly surprising: in many aspects the AKG K240 MK II is slightly better than the K271, which is supposed to be a notch higher in the pecking order.

Design and build
The AKG K240 MKII a true blue reference set from the AKG stables. Being studio monitors they’ve got everything that we’ve by now come to expect from cans in this class – long replaceable cables and superlative comfort. Not the prettiest looking headphones thanks to the mostly plastic housing, but they’ve got a fairly functional look at least. They’re quite light and the self adjusting headband does its job of propping the K240 on your head for those extended listening sessions. The K240 is semi-open unlike K271 which is fully closed. There is also another gimmicky difference between the two sets: there is an auto-off mechanism on the K271 which switches off the music as soon as you take them off. We spent a couple of minutes trying to figure out exactly how this works and jumped from theories of proximity sensors to finally what turned out to be a small little switch attached to the headband which does the trick.

Performance
The AKG K240 MKII uses Varimotion 30 mm XXL transducers to produce clear mids, accurate lows and great highs. Varimotion is essentially a transducer diaphragm of variable thickness which lets it vibrate at variable frequencies in different zones. Whatever the mechanics of the patented technology, the result is that the K240 MKII has one of the more neutral sound signatures around. While its elder sibling, the K271 has a more analytical sound with vocals coming right up front, the K240 has a more balanced tonal range. The semi-open design makes them sound better, not as a studio monitoring set, but certainly for your day-to-day audiophile needs they’re much better. The sound is fuller and the bass response is better than what we saw on the K271. At the time of testing we had a number of headphones with us from the likes of Blaupunkt, Harman Kardon, JBL and Sennheiser but what we missed most, particularly when comparing with this set, was the legendary M50 from Audio-Technica. That would’ve made for an interesting headon battle. We had the M50 with us earlier but it would’ve been nice to have it around for a direct comparison.
Verdict
Being semi-open is what sets the AKG 240 MKII apart from most other flat response headphones like the Audio-Technica M50. At an MRP of Rs. 10,000 they’re a little more expensive than they ought to be. However, a few online listings peg them at a street price of approximately Rs. 8.5k which is cheaper than what the M50 goes for these days. The main difference between the two is with comfort and bass performance. The M50 because of its closed back design delivers better bass and better isolation. On the flipside it makes your ears warm and sweaty. Also the M50 isn’t fully circumaural and some people don’t like that. If you want more comfort and an open airy signature combined with the aural nature of a flat response headphone, this is the set for you.