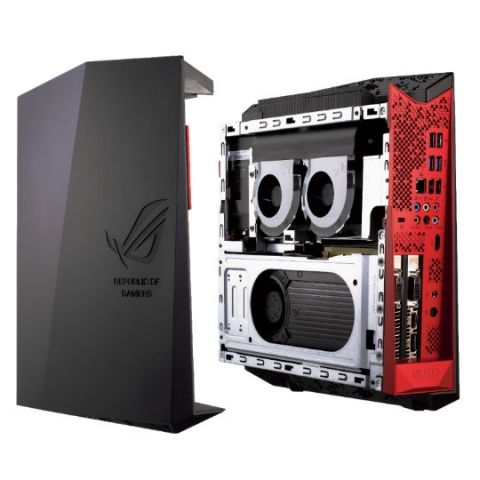 The desktop is priced at Rs. 1,85,990 and sports a 6th generation Intel i7 Skylake Processor

Asus’ Republic of Gamers (ROG) brand launched its new G20CB compact gaming desktop at Rs. 1,85,990. The company also says that it is the first PC in India to be equipped with NVIDIA Pascal GeForce GTX 1080 GPU. It also sports a 6th generation Intel i7 Skylake processor. Further, the desktop is energy-efficient with its Eco Energy Mode which the company says delivers energy savings which  are 50% better than the industry average.

ASUS Republic of Gamers (ROG) today unveiled its brand new G20CB compact gaming desktop, which is the first PC in India equipped with the latest NVIDIA® Pascal™ GeForce®GTX™1080 GPU. The ROG G20CB is a powerful, compact, console-sized 9.5-litre gaming desktop with refined aesthetics. Unlike most powerful systems, the G20 runs cool and quiet—thanks to a sophisticated custom cooling module and a fanless power adapter. The G20CB includes a 6th generation Intel i7 Skylake processor and its light zones are now fully customizable, offering 8 million colors in pulse, color cycle or music equalizer modes. The G20CB is particularly meant for ultra-high-end gaming, high-end gaming and mainstream gaming.

Elaborating further on the launch, Peter Chang, Regional Head - South Asia & Country Manager – System Business Group - ASUS India said, “Gaming is always about providing immersive experience which is ever changing with the latest technology. The  latest NVIDIA® GeForce® GTX® 1080 graphics card is the most advanced gaming graphics card the world has seen to date and it will provide an undisruptive HD-gaming performance and entertainment for gamers.”

The G20CB desktop is also eco-friendly, built to be energy-efficient with its Eco Energy Mode running at a mere 20W, delivering energy savings of 50% better than the industry average. To remain sleek, the ROG G20 is designed with no visible exterior side exhaust vents. On the outside, the ROG G20 sports a bold design boasting a matte-black finish and aggressive Mayan lines. These customisable lighting with up to 8 million colours, are designed to reflect the gamers’ feel of their gaming experience.

The company recently also launched the new line up for its flagship ‘Republic of Gamers’ (ROG) series in India, namely GL502 and the world’s first Liquid-cooled laptop, GX700.