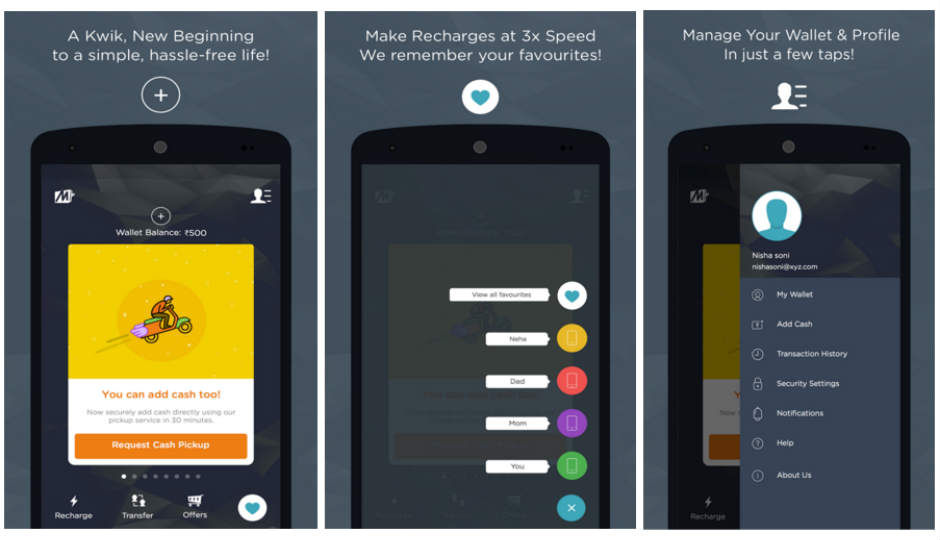 MobiKwik has updated its Android app with a new user interface. The new homescreen now has home screen cards that allow users to explore the different aspects of the mobile wallet. MobiKwik claims that transactions are now three times faster. The ‘favorites’ tab on the home screen records the user’s frequently recharged numbers for faster recharge and bill payments. User details like account details, favorites, saved cards, loyalty points, and transaction history are now placed inside a consolidated hub named ‘My Wallet’. When transferring money, users can now specify the purpose behind the money transfer. The update also includes a ‘games and apps’ tab that will suggest relevant games and apps to the user based on their needs and preferences.

MobiKwik, India's largest independent mobile payments network, has updated its Android app completely revamping its user interface. Reflecting its deep understanding of user behavior and tastes, MobiKwik has launched home screen cards that allow users to explore the different facets of the mobile wallet. The home cards are contextual in nature and would be personalized for each user. For instance, users who use MobiKwik only to recharge their phone can now easily be made aware of how to use the wallet to pay at a Café Coffee Day store or order a Domino’s Pizza. Other than highlighting new features and hitherto less known use cases of the app, the home cards will also sharply bring into focus exciting and popular deals on offer with various MobiKwik retailers and partners.

Tapping into material design, MobiKwik has introduced features in the Android app’s latest version 007 (also the internal code name for the project) that make for a more intuitive mobile
payments experience.

With the latest Android app update making a payment or transaction with MobiKwik is now 3x faster. The ‘favorites’ tab on the home screen records your frequently recharged numbers and connections and allows faster recharge and bill payments. Users can also move easily from one app function to another using ‘quick access’ icons visible on top of each screen.

You can now view all your MobiKwik details under one consolidated hub, named ‘My Wallet’. It comprises your account details, favorites, saved cards, loyalty points, and transaction history.

When sending money via MobiKwik users can now specify the purpose behind the money transfer. The receiver would know exactly for what reason he or she has been sent the money by sender.

A new tab has been introduced on the app under offers, ‘games & apps’. Under this tab users on the basis of their needs and preferences would be suggested relevant games and apps to download.