Apple AirPods remained the leader in the global true wireless hearables segment with a massive 60 percent share as the overall market reached 12.5 million units in the fourth quarter 2018, Counterpoint Research said in its latest Hearables Market Tracker. The market research firm added that the the iPhone-maker’s share was dented as customers waited for the new generation of AirPods, which were recently launched in the US.

The firm notes that apart from the wait for the second generation of AirPods, the strong performance of second-tier brands priced under $100, such as JLab and QCY, also had a negative impact on Apple’s market share. The best sellers list featured premium models priced around$150-200, like Jabra Elite Active 65t, Samsung Gear IconX, and Bose SoundSport Free - all featured in the top 10 best-selling list. 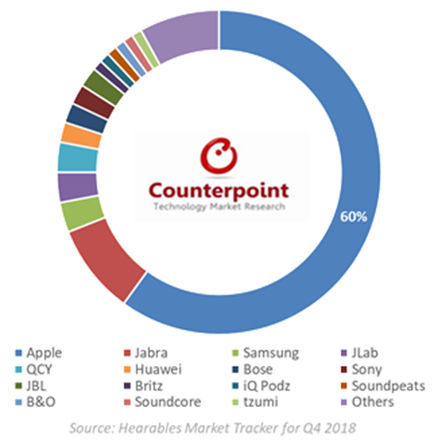 “In Q4 2018, cost-effective models such as JLab JBuds Air True Wireless and QCY T1 gained considerable market shares. As more companies enter the market and roll out new devices equipped with advanced features at a reasonable price, consumers will get a wider choice in the future. We expect the competition to intensify going ahead,” Liz Lee, Senior Analyst at Counterpoint Research, said in a statement.

In the region-wise segregation, North America was the largest market accounting for 24 percent of the volumes, followed closely by Europe and the Asia Pacific region excluding China. “Apple remained strong in its home market. However, global brands like Samsung and Jabra, and interestingly JLab and iQ Podz, also performed well in the US and Canada,” the firm said.

In Europe, Apple underperformed capturing lower market share as compared to other regions. Jabra gained the market share of 14 percent, and the performance of new brands such as Arbily, HolyHigh, and Vigoshop across Western Europe was also noteworthy. The iPhone-maker’s performance was healthy in Asia Pacific (ex. China) and new brands like Britz and GLIDiC performed well. In China, QCY’s presence is grew with its budget devices T1 and T1S. Other Chinese local brands including Honor, Edifier and ENKOR also performed strong.