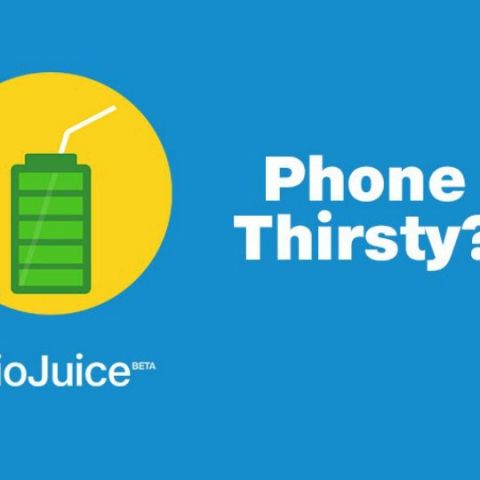 Jio Juice uses the mobile network to charge your phone so you don’t need a physical charger or a wireless charger. In case you didn’t get it, this IS an April Fool’s joke

We all love a good April Fool’s joke and Reliance Jio has taken the issue of smartphone battery life and turned it into a prank. The company has released a video which highlights the features of Jio Juice. The company has been teasing Jio Juice for a few days now.

The video highlights that all a user needs to do is insert the Jio SIM into the smartphone, and the phone starts charging. The video says, “Jio Juice uses the wireless Jio Network to create an electromagnetic field between the transmitter and the receiver. This enables a free transfer of energy through electromagnetic induction turning true 4G data packet into refreshing energy packets.”

It’s nice to see Reliance Jio pull such a prank on April Fools day. Google, Netflix, Amazon and more have released April Fools pranks and some of them have been quite believable.

On a more serious note, Reliance Jio has extended its Prime membership subscription for its existing customers at no cost. Users who are already Jio Prime members will be able to avail the telcos complementary services like extra data, free access to Jio apps and more, without needing to pay additional costs. It should be noted that the complimentary one-year subscription is a limited time offer and existing Jio prime users need to download the MyJio App and “express their interest” to get receive the benefit, says Jio.

In its press release Jio says, “Jio deeply values its loyal PRIME members and will continue to deliver additional benefits and superior value to these founding members. The continued availability of the Jio Prime Membership to new subscribers reiterates Jio’s commitment to deliver a differentiated Digital Life experience to Indians and will propel this into the world’s largest loyalty programme.”