Lack of Government support at the heart of call drops: Operators

The network providers have called for telecom to be deemed as an 'essential' service, and also stated difficulty of setting up towers as a major obstacle 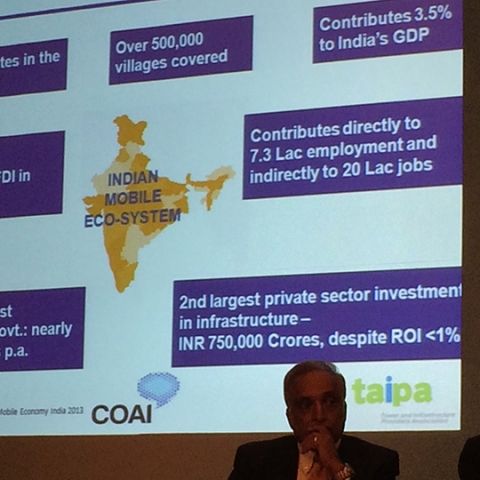 On Monday, August 17, heads of major telecom service providers (TSPs) gave a joint press conference along with cell site regulators and the Cellular Operators Association of India (COAI), addressing the contentious issue of increasing call drop rate in India. Speaking out on the issue, the service providers stated lack of support and permissive procedures by the Indian Government as the major obstacle behind providing uninterrupted services.

Among the key speakers were Rajan S. Mathews, Director General of COAI, Gopal Vittal, CEO of Bharti Airtel, Himanshu Kapania, Managing Director of Idea Cellular, Sunil Sood, MD-CEO of Vodafone India, Shantharaju, CEO of Indus Towers and Gurdeep Singh, President-CEO of Reliance Communications. Opening the conference with his presentation, Kapania brought forward statistics showing investments made by the operators to improve cellular services in India. Terming allegations regarding lack of infrastructural investments by the companies as "fiction", Kapania showed an investment of Rs. 1,34,000 crores committed by all network operators in the country, out of which Rs. 1,09,000 crores is being spent in spectrum acquisition. The remaining Rs. 24,000 crores have been allocated to capital equipment for new operators. He showed a capital expenditure to revenue ratio of 73%, against global average ratio of 12-18%. He stated, “There are about 12,000 sites where we want to invest but are not being allowed to, so anyone residing there will face a call drop.”

Shantharaju presented the difficulties of setting up and maintaining a cell site or a network tower, talking about the problems of municipal bodies sealing linked towers, which lead to a disruption in network distribution. He blamed fiscal deficits of these bodies as the reason for telecom providers and associates being held ransom and charged exorbitant rates to get work permit. The operators also stated the problem of extensive and complicated paperwork, inaccessible zones for setting up network towers and lack of a legal framework supporting their stance as the main reason behind the call drops. Sunil Sood, MD-CEO of Vodafone India, called for making “DoT guidelines a law” regarding setting up of cellular towers and giving more ground to service providers to set up better infrastructure.

The understanding between the operators was to regard communications services as an “essential service”, like electricity. When asked on any compensational strategies being taken to make up for the poor network quality, Bharti Airtel CEO Gopal Vittal claimed regular network quality checks, stating that “more than 95% of the tariff plans that are run are second-based plans,” so none of the companies are really reaping profits and opposing such a notion.

Recently, the Department of Telecommunications (DoT) and the Urban Development Ministry agreed to allow telecom service providers to set up network towers on government buildings. Shantharaju also stated that the “misplaced myth about emission from telecom towers” hinders network providers to set up more towers. This, coupled with massive power shortages, lower per-person spectrum allocation and an increasing number of users is leading to call drops. As of March 2014, average call drop rate on 2G spectrum was 1.64%. For the quarter ended March 2015, call drop rate had shot up to 12.5%, over seven times more than what it was. With operators seeking more support from the Government, it will be interesting to see how network quality gets affected in light of increasing high speed networks across the country.