Xiaomi patents phone with notch sticking out of chassis

The notch sticks out of the traditional bar-shaped chassis.

It has dual-camera and earpiece in the notch.

OEMs have been trying different notch designs to deliver a device with large screen size in a compact chassis. While some adopted a waterdrop style notch, Samsung came up with a punch-hole design to deliver a near edge-to-edge display for maximum screen space. In the latest development, Xiaomi has patented a smartphone design with an notch that sticks out of the regular bar-shaped chassis of a phone.

As you can see in the sketches below, the notch has two cameras on the front and an earpiece just below them. The panel gives an edge-to-edge display impression. The sketch of the back panel shows a dual camera setup on the top left corner and there is no visible fingerprint sensor. Noticeably, there is nothing on the backside of the bulged-out notch.

Companies file multiple patents but they don't neccessarily have to become actual products. 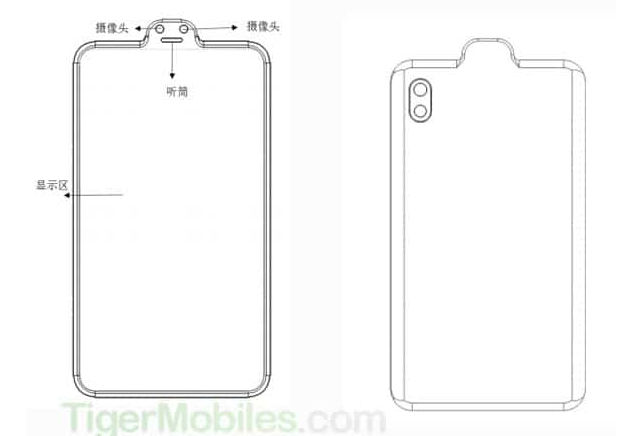 Currently, Xiaomi is said to be working on a Redmi smartphone with a Snapdragon 855 SoC, bringing flagship harware at an affordable price point. Xiaomi’s Product Director, Wang Teng Thomas had posted an image on Weibo which showed Xiaomi co-founder and President, Lin Bin with a phone on the table having a cut-out that looks like an opening for a pop-up mechanism that a lot OEMs are using on their phones.

Xiaomi has already launched Mi Mix 3 phone in China. The phone features a nearly bezel-less design, which is made possible by using a magnetic sliding mechanism that pulls the display down to reveal dual front cameras on the top, behind the device’s display. There are dual cameras on the back as well and the company had already confirmed that it can capture super slow motion video at 960 fps.

It features a 6.4-inch Full HD+ AMOLED HDR display, Snapdragon 845 SoC and comes with multiple RAM variants. At MWC this year, Xiaomi launched the 5G variant with Snapdragon 855 chipset. It runs on MIUI 10 and is backed by a 3200 mAh battery. The phone comes with dual cameras on both the front and the rear. On the front is a 24MP Sony IMX576 sensor coupled with a 2 MP sensor. On the rear is a 12MP + 12 MP camera setup with dual Phase Detection Auto Focus.