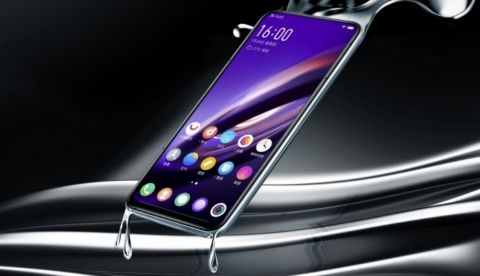 A day after Meizu unveiled its ‘Zero’ smartphone, Vivo has launched it own version of the “hole-less” device, the Apex 2019. Quite similar to what Meizu Zero offers, the Vivo Apex also comes with capacitive touch and pressure sensitive sides, but is more powerful than its competitor. There is another difference; while Meizu offers a complete portless device, Vivo’s Apex 2019 has an 'invisible' port.

While the Meizo Zero depends on wireless charging, but it's still not clear if the Vivo Apex 2019 even supports the tech. What’s known is that the Apex 2019 uses what Vivo calls a MagPort, which is basically a magnetic connector on the rear that can be used to charge as well as for transferring data. There is no confirmation whether it is waterproof like the Meizu Zero. Since, it’s a concept device, there is no word on its release, but reportedly, Vivo will showcase this phone at MWC.

The Vivo Apex 2019 packs flagship specs and it is powered by a Qualcomm Snapdragon 855 chipset, coupled with 12GB RAM. It is reported to have either 256GB or 512GB of storage, and 5G connectivity. It should be noted that 12GB RAM and 5G support are a first for Vivo. The phone features a 6.39-inch AMOLED display which doubles up as the speaker via a piezoelectric transducer to emit sound. The phone also has thin bezels to boot.

Interestingly, Vivo Apex 2019 comes with a Full-Display Fingerprint Scanning, which essentially means that a user can touch anywhere on the screen to to unlock it via the in-display fingerprint scanner. In the camera department, the phone sports a dual camera on the rear with a 12MP sensor and a 13MP sensor with LED flash. There is no sight of a selfie cam and it is still to be known if the company has device to pack a Vivo Nex-esq pop-up camera' or has chosen to ditch the selfie shooter entirely.