We recently came across some reports suggesting that Samsung is working on a watered-down version of the Galaxy Note10 handset. Allegedly called the Galaxy Note10 Lite, the smartphone is rumoured to debut at CES 2020. Ahead of the assumed launch, some new images of the handset have surfaced online, which hint at its S Pen and a new camera setup design. The images were posted on Twitter by the tipster TechTalkTV and they show off the device from most angles. While there is no info about the device’s display screen size, it is not curved from the sides, as we are used to on the Note series of Galaxy devices.

There’s a punch-hole camera on the center-top area, similar to the current Galaxy Note10 and there are slim-yet-notable bezels around the display. Moving on to the rear panel, it seems to be built out of plastic with a glossy finish, which could be one of the main differences between the standard version and the Lite variant. However, one notable change here is the main camera design, which is rectangular shaped and slightly reminds us of the Pixel 4’s camera. There are three sensors in the camera setup, along with an LED flash. There’s no information about their specs.

There is also a shot of the About Phone section of the Galaxy Note10 Lite. It suggests that the device could sport the model number SM-N770F/DS and it might come with dual-SIM support. The S-Pen is also shown off in one of the photos and it seems similar to the S Pen Samsung used on the Galaxy Note10. However, rumours suggest that it could come with additional functionality and might work even better than its predecessor. As for other specs, previous reports suggest that the smartphone could be powered by the Exynos 9810 processor. It could also come with up to 8GB RAM and up to 128GB of internal storage. 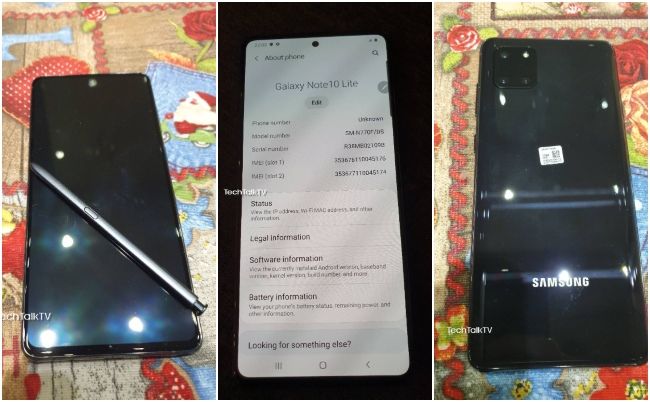