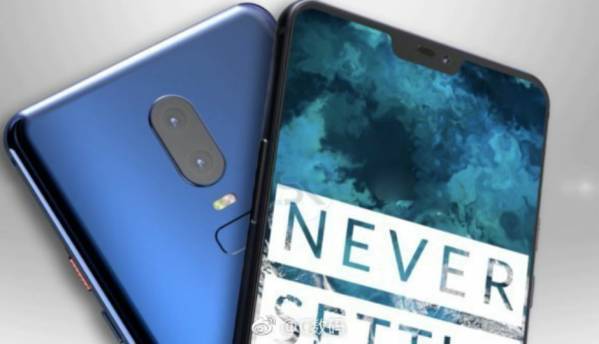 The device is seen featuring an edge-to-edge bezel-less display with the notch on top. It also shows the device’s new OxygenOS interface.

The upcoming OnePlus 6 smartphone will be unveiled globally on May 16, followed by an India launch on May 17. Ahead of the official launch, an image of the device has been posted online, giving a look at its display, which comes with a notch on top. As per the image shared by iGyaan on their Twitter account, the smartphone features a thin-bezel display and seems to be running on Android 8.1 Oreo, going by the status bar icons on either sides of the notch and the on-screen navigation buttons. The design of the smartphone is hidden with a special case, which covers all of its sides. However, this seems somewhat dubious as any power user with knowledge of custom ROMs can flash OxygenOS ROM on any of the devices available with a notch on the display like the Vivo V9 or the Oppo F7 and set the proprietary OnePlus wallpaper on its homescreen. But of course, this is speculation on our part.

The OnePlus 6 was also recently leaked in renders and as per the report, it will be launched in White, Glossy Black and Smoked Glass colour variants. The renders suggest a nearly bezel-less design and on-screen navigation buttons. This is against an earlier leak, which suggests that the company might offer gesture-based controls, similar to what the Apple iPhone X offers. However, the company might simply offer both options to the user. “Designed by OnePlus” is written on the bottom of the rear panel. This was also revealed in a teaser by OnePlus. You can check out the previous render here. 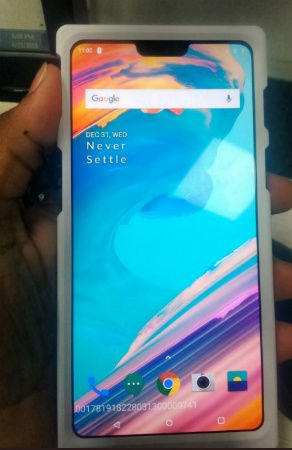 From what is confirmed about the OnePlus 6, the smartphone will be powered by the Qualcomm Snapdragon 845 SoC with 8GB RAM. It will also come with 256GB of internal storage and could be waterproof or splashproof as well. The smartphone will feature a 3.5mm audio jack and is teased to come with gesture-based controls. It is confirmed that it will be an Amazon exclusive and interested buyers can sign up for getting notified when it’s available. Amazon Prime members will get early access to the device’s sale at 12:00 PM IST on May 21, 2018.

OnePlus officials have explained that the decision to incorporate a notch on smartphone’s display is in order to provide more screen real estate to users. Those who are averse to the notch will be able to use a compatibility mode to hide it, presumably by blacking out the sides of the notch. The smartphone’s launch will be live streamed on its official website, YouTube and via its social media channels like Facebook and Twitter as well. Their fans also have a chance to attend the event and witness the launch live by buying tickets for it. The event will take place in Mumbai and you can learn more about how to book the tickets here.

OnePlus recently confirmed that there will be a OnePlus 6 x Marvel Avengers Limited Edition smartphone, which will also be launched alongside the regular OnePlus 6. The company revealed this in a teaser video, giving a brief look at the 19:9 display of the Avengers edition OnePlus 6 x with a “unique” textured back. The Limited Edition smartphone will feature design elements inspired by the movie, something similar as the previous year’s OnePlus 5T Star Wars Edition, which featured a textured rear panel, a red Alert Slider and Star Wars logo on the back.

Some camera samples taken by the OnePlus 6 were previously shared by the company’s CEO and Founder Pete Lau. Lau also later revealed in a blog post that the standard variant of the device will feature a glass rear panel with five printed layers of Nanotech Coating. As for the images, they showcased the phone’s camera capabilities in bokeh shots and daylight images. As meta-data from the images was removed, no details of the device’s camera setup were found out.