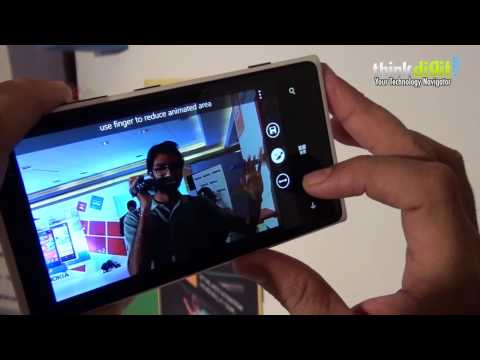 Yesterday was supposed to be a big day for Nokia, announcing its new lineup of devices that would run Windows Phone 8. Great day, great announcements, save for the lack of availability and price. Oh and not to mention, the devices weren’t even running the final version of Windows Phone 8. One could hypothesize that the announcement was premature, especially given how the iPhone launch is just days away. Something this halfhearted would definitely not work in Nokia’s favour.

The Nokia-Microsoft event introducing the new Nokia Windows Phone 8 devices was not the highlight of the day though. Nokia’s Lumia 920 includes the PureView technology as according to Nokia, “it’s not about the megapixels.” So the Lumia 920 houses an 8.7 megapixel sensor, but the main attraction of the imaging section of the phone is the floating lens with a maximum aperture of f/2.0. A floating lens is essentially hardware based optical image stabilization, which Nokia is dubbing OIS.

To demonstrate the effectiveness of the OIS, Nokia aired an advertisement, of a happy couple riding around on a bike, while the guy films the girl with the Lumia 920. The ad looks really well done, given that it was shot on a cellphone, but the only problem is, it wasn’t.

For a fraction of a second, you can see the couple pass in front of a reflective surface, in which what is clearly visible is a white van with a complete camera crew sitting in it. Seriously Nokia? It is one thing to show an incomplete product, but it’s a whole different ball game when you fake the capabilities of what your product can do.

Once the fakery was revealed, Nokia followed it up with a public apology on their blog along with a video (seen below) that they claim was actually shot on the new phone. No reflective surfaces in this one for sure.

Given that the Nokia’s lifeline has been hanging by a thread, this massive fiasco of a fake advertisement would definitely impact their reputation badly. Not to mention showcasing a product with a complete lack of pricing and availability and a phone running an incomplete OS. One can’t help but wonder if Nokia is just tethering on desperation now.

Do check out Nokia's blog post introducing the PureView technology on the Lumia 920, which showcases other features.