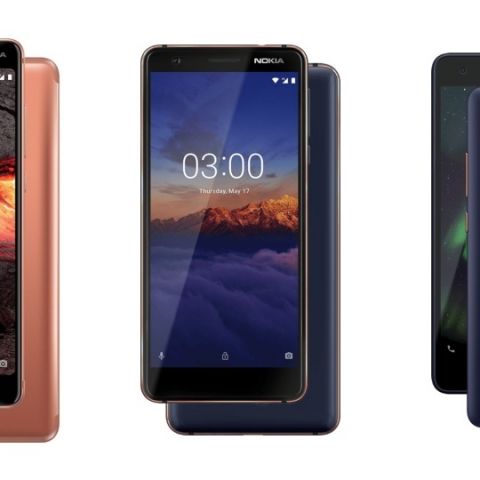 The smartphones were unveiled with several launch offers. On all three phones, the company had offered 10 percent cashback with Paytm recharges and bill payments by scanning the Paytm Mall QR code at retail stores. There is also a 5 percent cashback available for ICICI Bank debit/credit card holders on the Nokia 5.1 and Nokia 3.1. When we last checked on Paytm Mall, the Nokia 2.1 and the Nokia 5.1 smartphones were already out of stock, but stocks could get replenished soon. On Nokia’s official website, you can purchase the devices by putting in your pin code. The website will check the availability of the smartphone and, if available, you can add the phone in your cart. The shipments for all three smartphones will start from today (August 13).

The Nokia 5.1 features a 5.5-inch Full HD+ 18:9 display which is protected by Corning Gorilla Glass 3. The smartphone is powered by an octa-core MediaTek MT6755S SoC and is paired with 3GB RAM and 32GB storage. In terms of optics, the Nokia 5.1 is equipped with a 16MP single camera, which supports Phase Detection Auto Focus (PDAF) with a dual-tone flash on the back panel. On the front, there is an 8MP wide-angle shooter. The smartphone features a 3,000mAh battery. The phone is in Copper, Tempered Blue, and Black.Click here to buy.

The Nokia 3.1 was already launched last month in India, but the company has now introduced a 3GB RAM variant of the device. The Nokia 3.1 features a 5.2-inch HD+ IPS display with an 18:9 aspect ratio. Under the hood, the smartphone comes with a MediaTek 6750 Octa-core chipset. When it comes to the camera, the handset features a 13MP camera with f/2.0 aperture and LED flash on the back. In the front is an 8MP wide-angle shooter. The device is powered by a 2,990mAh battery.Click here to buy.

The Nokia 2.1 is the company’s second Android Oreo (Go Edition) smartphone. The Finnish giant claims that the Nokia 2.1 has a 50 percent performance gain over its predecessor. The device is powered by the Snapdragon 425 SoC and features a 5.5-inch HD display with 16:9 aspect ratio. It comes with two front speakers on the top and bottom bezels. The smartphone is equipped with 1GB RAM, 8GB internal storage (expandable to 128GB). With the 4000mAh battery, the Nokia 2.1 promises a two-day battery life. In the camera department, the phone comes with an 8MP rear camera with autofocus and a 5MP front-facing sensor. The handset is available in Blue/Copper, Blue/Silver and Grey/Silver colour models.Click here to buy.