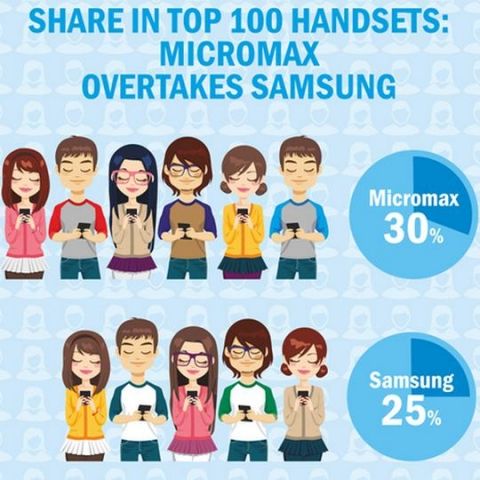 More users are switching from basic feature phones to Android phones in India. According to the latest State of the Android Mobile Web report for India by Opera software, number of Android users in India have seen a significant growth, while more and more users are now accessing e-commerce and video portals.

The report, based on statistics gathered from millions of users of the Opera Mini mobile web browser, sheds light on browsing behavior among Android users in the country. According to the report, Opera Mini is now used by more smartphone users than basic Java phone users in India. Of all Opera Mini users, 47% are now on smartphones. Android and Java are the two most used mobile operating systems. According to statistics, they are on an almost equal footing, with user bases of 44% and 45% respectively among all Opera Mini users in the country.

Micromax overtakes Samsung: Micromax has the biggest share in the category of the top 100 handsets used with Opera Mini, followed by Samsung, last year’s frontrunner. However, Samsung still dominates the top 10 devices used by Opera Mini users. When it comes to spending on handsets, Indian consumers remain price conscious. Of all Android handsets used by Opera Mini users, 77% are priced below Rs 10,000, according to the report.

Opera Mini also points out growth of videos. “Android users on Opera Mini love watching video on their mobile devices. Unique user visits to video sites increased by 205% since last year. YouTube leads this category, followed by Dailymotion and Metacafe. The number of Opera Mini users visiting these sites grew by 175%, 450% and 205% respectively in that timeframe,” says the report.

On growth of e-commerce, the report points out: “E-commerce sites witnessed a growth of over 240% in Opera Mini users over the last year. Within this category, shopping portals experienced a massive 356% growth in user visits. The most accessed site is Flipkart, followed by Amazon and Snapdeal. Online classifieds websites are also becoming more popular among users. The category jumped 150%, with Quikr in the lead, followed by OLX and Sulekha.”