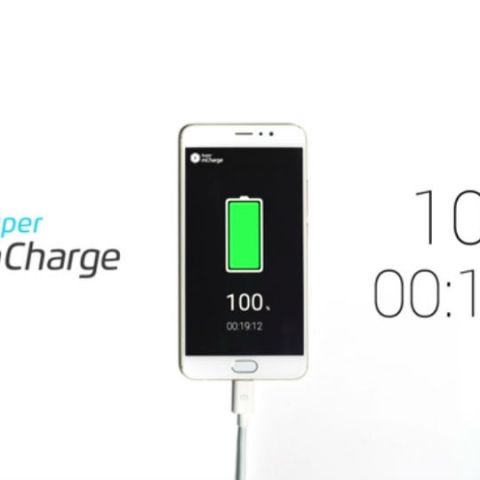 Meizu, the Chinese consumer electronics company, has introduced the ‘world’s fastest battery charging solution’ at the Mobile World Congress in Barcelona. The battery breakthrough can charge a completely discharged device to 100% in just 20 minutes. Super mCharge was developed by Meizu's R&D team. “Innovation isn’t an easy job, but we believe that success comes from passion. We’ve overcome numerous difficulties and obstacles, to create the best technology for all,” explained Li Tao, Supervisor of Meizu’s R&D team.

The technology called, Super mCharge, uses the high-voltage direct charge method that enables batteries to top up much faster than current fast-charging technologies. In a press statement, the company claims, “With Super mCharge, an empty battery can be fully charged in the same amount of time it takes to finish a cup of coffee, freeing up users from hours of time being hooked to a charger or power banks.”

Super mCharge uses a 11V/5A charging connector that boasts of a maximum power of 55W for an accelerated full charge time of just 20 minutes. It also comes equipped with a heat-management system that prevents the battery from overheating while charging. Meizu says that with Super mCharge the battery temperature tops at 39 degrees celsius during charging, which is a safe limit.

“The reduced heat-dissipation and current, along with an upgraded data cable capable of supporting 160W, ensure that Super mCharge is both safe and durable. Tests show that its 3000mAh ATL battery retains over 80% capacity after over 800 charge and discharge cycles, giving it a service life of more than two years. It can bear more than 4 times the current of an ordinary battery, which allows it to cope reliably,” explains Meizu.