The collaboration will bring mid- to premium-range smartphones, capitalising on the growth of 4G in India 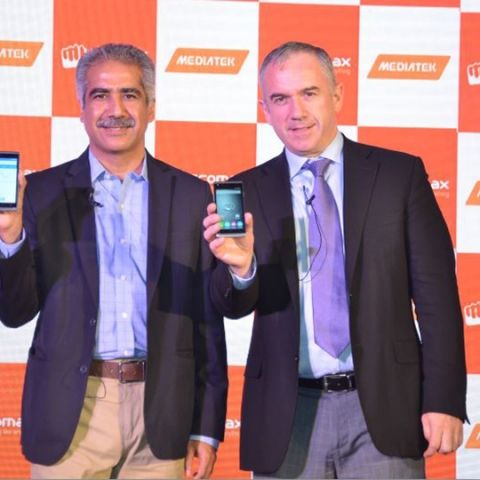 MediaTek has captured a sizeable market share in India, especially in the budget smartphones segment. Today, the chipset maker has announced an enhanced strategic collaboration with Indian smartphone giant Micromax. The two will bring a MediaTek-powered smartphone to India soon, and work closer to bring more devices with 4G support in India. This move closely follows the launch of the Meizu MX5 in India powered by a Helio chipset priced at Rs. 19,999.

At its event, Micromax claimed that it is the top player in the sub $125 (Rs. 8,500 approx.) smartphone segment.  On the other hand, MediaTek has expressed how important India is as a market for itself. India is the second largest market for MediaTek, according to statistics, and its annual volumes have increased 50x between 2007 and 2014.

MediaTek also has R&D presence in Delhi and Bengaluru. At the same event in Delhi, Vineet Taneja, CEO, Micromax Informatics said, “We will have 15 to 20 smartphones under $125 (Rs. 8,500 approx.) by end of this year (2015).” This is a testament to the expanding budget smartphone segment in India, and how Micromax and MediaTek have joined hands with an intention to further dominate this segment. Micromax will benefit from the mobility solutions featuring in its chipsets, with MediaTek at a parallely advantageous position of gaining from Micromax's robust presence in India, especially in Tier 2 and Tier 3 cities. The collaboration comes in light of expanding 4G connectivity services in India.

“India is at the cusp of digital revolution and at Micromax Informatics we have been putting in concerted efforts to bring the best in class 4G LTE smartphones to take Internet usage to an unprecedented level. Today’s partnership exemplifies the same endeavor and we are delighted to partner with MediaTek for its Helio Family” said Mr. Vineet Taneja, CEO, Micromax Informatics. “We have always endeavoured to offer products based on certain needs of the consumer. Moving forward, we will lead the 4G adoption in the country by converting all our popular value Canvas series to 4G. Canvas Fire 4G is the first in a series of such launches.”