The LG G5 features a Qualcomm Snapdragon 820 chipset, along with 4GB of RAM and 32GB of internal storage, keeping it in line with most of the present-gen flagship devices. 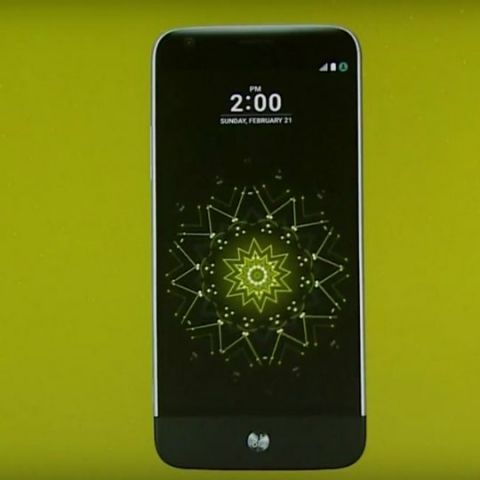 LG has unveiled the LG G5 smartphone at its pre-Mobile World Congress LG G5 Day in Barcelona. The LG G5 has a primary 5.3-inch QHD LCD display with 3D Arc Glass on top. It has a full metal unibody construction, and is powered by a Snapdragon 820 chipset, along with 4GB of RAM and 32GB of internal storage, expandable by upto 2TB with microSD cards. It also comes with a dual-lens, 16MP standard and 8MP wide primary camera setup with increased 135-degree wide viewing angle. A 2800mAh battery pack powers the entire setup. The bottom panel of the smartphone slides open to release the battery pack, a neat design innovation by LG.

The Always-On display on the LG G5 stays on the main screen displaying the time, and consumes 0.8% battery each hour. As a result, LG claims that it will consume minimal battery and processing resources, alongside showing you the time. Other major innovations include the LG Friends ecosystem, consisting of multiple complementary accessories like the LG Cam Plus module giving you camera controls for better imaging and also added battery life taking the entire capacity up to 4000mAh. It also enhances audio with a HiFi B&O Play audio adapter. The ecosystem also has the LG 360 cam module, a 16MP 360-degree camera that is integrated with Google Street View. Other features include low-power location estimation, Qualcomm Quick Charge 3.0, Qualcomm AptX HD audio, Dolby Digital Plus, and others.

The device is natively 7.7mm thin, and goes up to 8.6mm with the added module(s). It comes with Android Marshmallow, and has USB Type C port and NFC compatibility, along with the latest generation Snapdragon X12 LTE modem for faster connectivity. There are four colour variants - silver, titan, gold and pink. Pricing and availability details will be announced soon. Stay tuned, for further details!