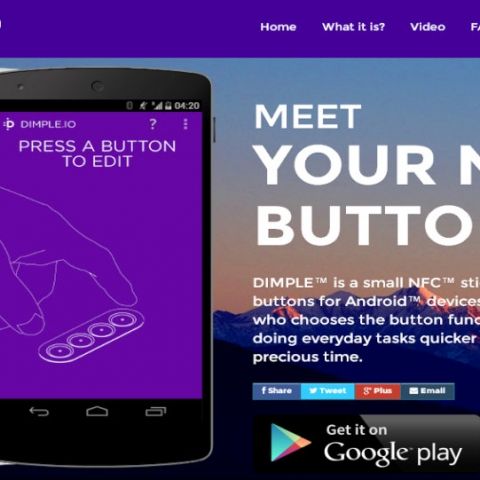 Customization in Android is about to reach a new level as more ideas of additional (optional) physical buttons are coming into the scene. Last year, a Kickstarter project called Pressy was introduced which claimed to give Android users an additional thin physical button that can be inserted into your headphone jack. It can be programmed to do just about anything such as starting your camera or any specific app. Now, guys at Dimple.IO have taken it to a whole new level by introducing a little sticker that uses NFC technology and features, not just one, but four physical buttons.

The buttons are featured on a sticker that attaches anywhere on the back of your Android phone. You can customize the input for each button by setting it up when you use it for the first time. You need to press the buttons which issues NFC commands to the phone. Each command is received by the Dimple.IO app after which, you can instruct the app to execute any functions that you just saved for each of the buttons. You could make it an additional home button, launch your favourite apps, camera, launch a popup drawer, control your music, make calls, change settings and have a torch light button. 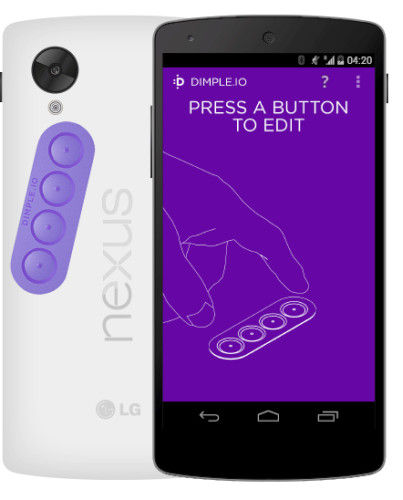 The app promises even more 'crazier' customization options with Tasker integration for users who like playing around with the settings of their phones. Dimple.IO is also launching an open plugin SDK for developers so that they can add support for their apps. It would be fair to say that this product will actually put NFC to a good use as the technology is rarely used otherwise, especially in India.

The sticker is the size of a band-aid and sticks to any non-metal phone (sorry HTC One users). It doesn't require a seperate battery as it operates by harvesting energy that your Android NFC enabled device radiates. The sticker is quite thin at 0.5mm.

The company is launching an Indiegogo campaign on May 6. If Dimple.IO is able to raise enough funding, the company plans to ship the devices by August. It is expected to cost around $28 at launch. The team working on the device has already produced its first experimental mass production batch of 250 dimples. According to the company, the fundraiser will help it to prepare the product for full-scale production. Currently, the team consists of just 4 people.

Chinese manufacturer Xiaomi is also working on a similar product called MiKey, which can used in a similar way. MiKey supports multiple clicks which can be programmed to do any task on an Android smartphone. It will support 10 different click combos including long or short presses.

So, if you get the Dimple for your Android device, which functions will you program the buttons for? Let us know in the comments below.

For more info on Dimple, visit their official website.