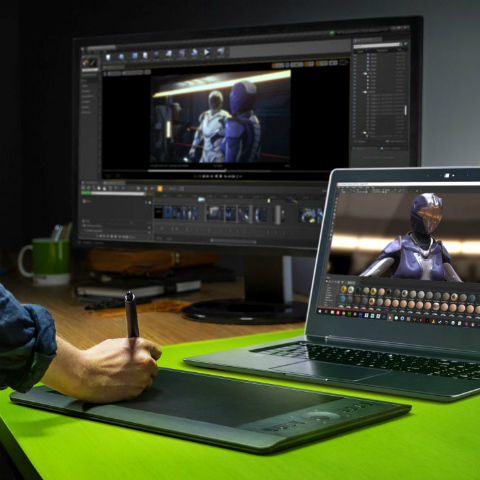 We were expecting a slew of announcements from Computex 2019 and we aren’t disappointed. A day ahead of the event, Nvidia has made a slew of announcements including a new Nvidia Studio platform, along with a full range of Turing architecture-based Quadro GPUs for mobile workstations. Nvidia Studio is a collection of company’s RTX GPUs, Stack of specialized SDKs and dedicated Studio Drivers. They are the company’s new software-hardware initiative aimed at creators that were introduced with 17 RTX Studio laptops at Computex from seven PC manufacturers. On the other hand, the new range of NVIDIA Quadro RTX-powered mobile workstations features Quadro RTX 5000, 4000 and 3000 GPUs.

Nvidia is rebranding its existing Creator-Ready Drivers to Studio Drivers and the collection of SDKs and APIs under the branding is said to boost performance and efficiency in creative software. Along with GeForce RTX 2080, 2070 and 2060 GPUs, the laptops featuring RTX Studio branding will also come with the new Quadro RTX 5000, 4000 and 3000 GPUs. Comparing the performance of new laptops, Nvidia claims they speed up content creation with up to 7x than the MacBook Pro. Many of the laptops sport 4K precision displays and the company’s Max-Q technology.

The company has also announced Nvidia Studio Stack, which is a set of software aimed at digital content creators. It consists of Nvidia Studio SDKs and APIs for app developers, along with NVIDIA Studio Drivers for creators. Nvidia says its Studio Drivers are testing against multi-app creator workflows and creative applications from developers such as Adobe, Autodesk, Avid, Blackmagic Design, Epic, Maxon and Unity. The company’s RTX Studio laptops will be available from June with a price starting at $1,599 (Rs 1.11 lakhs) but this can change based on partner designs, features and region.

Nvidia Quadro equipped systems will start shipping in the second half of 2019. Global OEMs such as Dell, HP, Lenovo and regional system builders including MSI will include the new GPUs in their offerings.