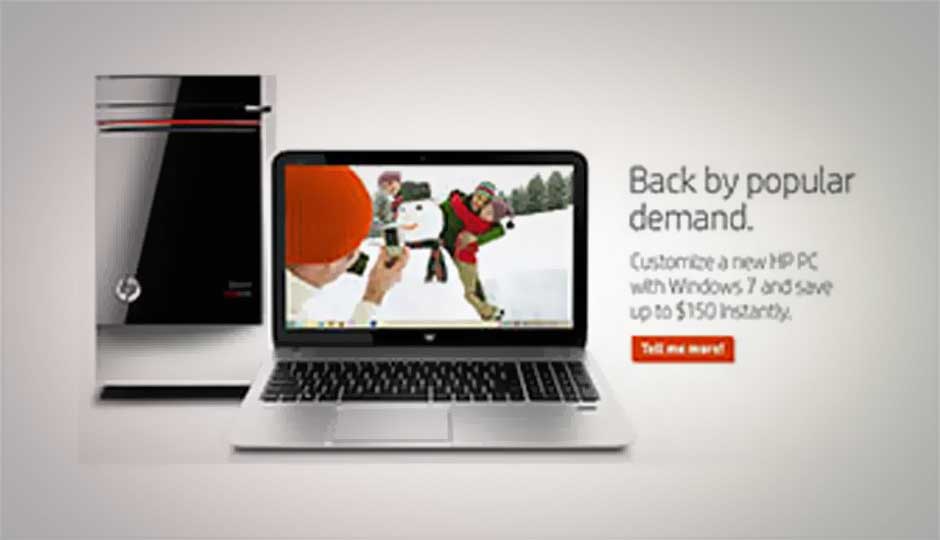 HP has begun offering desktop and laptop PCs running Windows 7, stating the older OS is "back by popular demand." HP is giving an additional discount of $150 for its Core i5- and i7-powered machines to boost sales.

HP is offering five laptops with Windows 7 OS, ranging from an entry-level Pavilion desktop as well as ENVY performance PC's. The five Windows 7 PCs HP is offering are part of its consumer line-up. The devices are priced from $480 for a desktop and under $600 for a notebook.

Windows 7 OS has 47.5 percent of all desktop PCs market share, according to Web tracker Net Applications December report. Windows XP has nearly 29.9 percent of desktops which is three times the share of Windows 8 and 8.1 OS market share cobined. Windows 8.1 has managed to grab a healthy number of users since its debut last October, however a vast majority of Windows users prefer the older operating system. The Windows 8.1 OS has 3.6 percent of the desktop operating system market share, but falls behind Windows 7 and Windows XP with a wide margin.

According to reports, Microsoft is working on its new Windows 9 OS that will be released sometime this year. The company announced at its annual developer event the new OS will "put Windows 8 in the rear-view mirror."

PC shipments have been falling for the last seven consecutive quarters, so HP’s Windows 7 OS sale may be an attempt by the company to improve sales by reverting to Microsoft’s more successful OS. IDC's Worldwide Quarterly PC Tracker report for 2013 stated that PC shipments globally will fall by -10.1% in 2013, and will continue to decline further by -3.8% in 2014. This is the worst yearly fall on record for PC's sales till date.