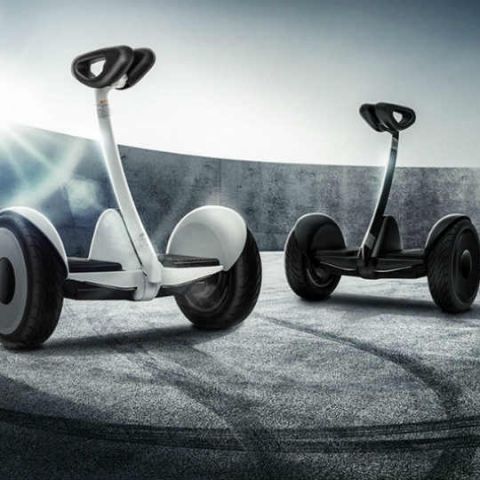 Xiaomi has launched Ninebot Mini, a two-wheeled electric vehicle that is battery-powered and self-balancing. The scooter is priced at RMB 1,999, which is approximately Rs. 20,300 by direct conversion. Aside from the Ninebot Mini, Xiaomi also announced Mi TV 3 as well as other products.

The mini scooter has been developed with Ninebot, a Chinese transportation robotics firm. Ninebot also own Segway, a company that is synonymous with two-wheeled, self-balancing electric vehicles. The Ninebot Mini has been built using aerospace-grade magnesium alloy and weighs about 12.8 kg. Vehicle can move at a speed of 16km/hr and can travel for about 22 km on a single charge. It can also ride up a 15 degree hills. Users can also upgrade the firmware, monitor speed, traffic data, and systems via their smartphones. The Ninebot Mini will be available in Black and White variants.

Aside from the scooter, Xiaomi also announced the Mi TV 3. The television comes with a 60-inch 4K display and MEMC motion compensation. It also has a aluminium metal frame and is 11.6mm thick at its thinnest point and 36.7mm at its thickest. The Mi TV 3 is priced at at RMB 4999, which is approximately Rs. 51,000 by direct conversion.

The company also announced the Xiaomi Mi TV Bar, a main board which Xiaomi claims can turn any display into a smart TV. It also has built-in speakers with Dolby Audio technology. The main board runs on Android Lollipop v5.1 and is powered by a 1.4GHz quad core processor with 2GB of RAM. The Mi TV Bar is built with aluminium panels and works with TVs, displays, and projectors. The device is priced at RMB 999 which is approximately Rs. 10,200 by direct conversion.

In the past, Xiaomi has launched a number of other products besides smartphones and tablets. There include water purifiers, air purifiers, routers, lights and more. There are also rumors that it is working on launching a notebook in 2016.