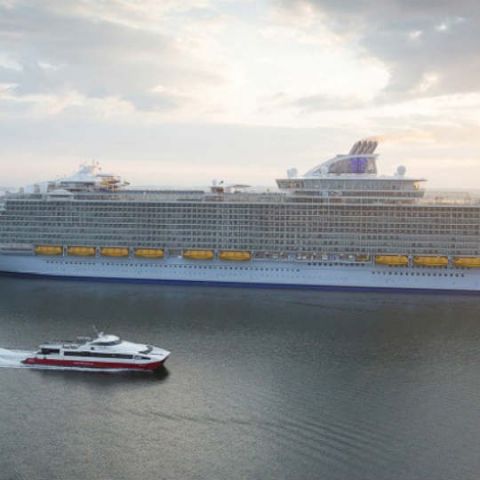 Called ‘Harmony of the Seas’, it makes its debut voyage on the English Channel.

The world’s largest luxury cruise liner, ‘Harmony of the Seas’ completed its maiden voyage from France to England on Tuesday. The cruise ship is owned by the Royal Caribbean and this is the 25th ship in its fleet. This giant in the ocean weighs 2,27,000 tons, can carry 6780 guests with around 2100 crew members and is labelled as a floating city.

The ship is 362 metres long and took three years to build, costing over $1 billion. It also has 23 swimming pools and a total of 16 decks. It is labelled a ‘floating city’ with 7 ‘neighbourhoods’ that even includes a Central Park lined with trees.

On board the ship is a Bionic bar where bartender robots are capable of mixing two drinks per minute, and 1000 drinks per day. It also has ‘Virtual balconies’ that act as balconies to the windowless, interior rooms of the ship. These high-tech virtual balconies are large screens fitted to a wall, which live-stream ocean views in real-time by using footage from high-speed cameras placed around the ship.

The cruise ship is home to the world’s tallest slide ever built on a ship and is named the ‘Ultimate Abyss’. It is a 100-feet drop, which starts from the Pool and Sports Zone on the 16th deck and ends at the Boardwalk on the 6th deck.

Cruise rates for guests wanting to vacation in style start from $1,000 per person.