Samsung latest device Galaxy M10 is now available for purchase in India via Amazon. This budget device has been launched in India at a starting price of Rs 7,999, which brings this phone closer to the RealMe C1 that is also available for Rs 7,000 (appx) i Samsung has recently launched two new smartphones in India Galaxy M10 and M20. The Galaxy M series is currently available in India only and haven’t released in other countries yet. Samsung has kept the price of both the smartphones under Rs 15,000. On the other hand, we have the RealMe C1, which is also available in India around the same price as the Galaxy M10, which makes this RealMe device a direct competitor of the Galaxy M10. So, let’s begin with a quick specifications comparison to see which device is offering the best hardware at least on paper. 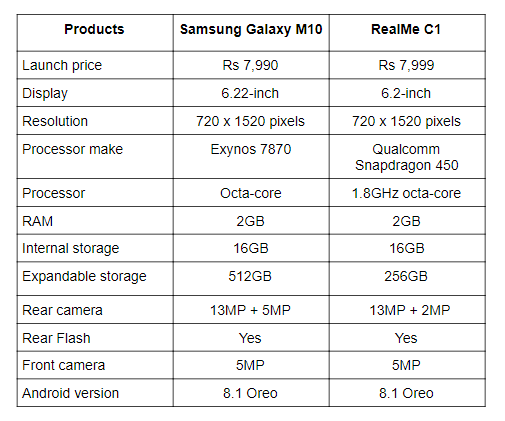 Let’s begin with comparing the display of these two smartphones in detail. The Samsung Galaxy M10 has a pretty big 6.2-inch display that offers a resolution of 720 x 1520 pixels. The Samsung has provided a small water-drop notch on top of it, which houses the front-facing camera. The RealMe C1 also sports a 6.2-inch display that comes with a resolution of 720 x 1520 pixels, same as the Galaxy M10. However, the device is equipped with the old traditional notch on top, which is quite bigger than the notch that Samsung Galaxy M10 comes with.