Samsung keeps workers in dark about deadly chemical use in factories: AP 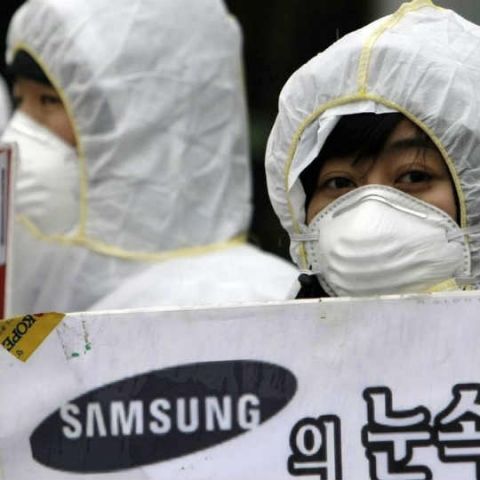 An investigation by Associated Press has revealed that Samsung is in cahoots with South Korean authorities to withheld information on deadly chemicals used in their chip and display factories.

Technology stalwart Samsung has been accused of withholding information from its South Korean factory employees, about the hazardous effects of chemicals used in their chip and display manufacturing facilities. This information comes to light with a supporting investigation conducted by the Associated Press.

The AP report states, “An Associated Press investigation has found South Korean authorities have, at Samsung's request, repeatedly withheld from workers and their bereaved families crucial information about chemicals they were exposed to at its computer chip and liquid crystal display factories. Sick workers are supposed to have access to such data through the government or the courts so they can apply for workers' compensation from the state. Without it, government officials commonly reject their cases.”

Workers in Samsung’s South Korean factories have reported numerous health problems due to chemicals used during various processes of manufacturing chipsets and displays. Hwang Yu Mi, a Samsung factory worker who worked on chemically bathing Silicon wafers, died of leukemia at the age of 22. Post Yu Mi’s death, her father, Hwang Sang-gi, asked that the government investigate health hazards at Samsung’s semiconductor factories. Now as per AP’s report, “when Hwang sued after his first claim for government compensation was denied, he struggled to get details about the factory environment. A government document he received about his daughter's workplace had a section for listing the chemicals used there, but that space was left blank because Samsung did not release that information to worker-safety officials.” Moreover, Sang-gi also claims that Samsung offered him 1 billion dollars in 2007 for staying silent, and asked him not to pursue a case regarding his daughter’s death.

AP has also found that the justification for not releasing this information has been stated as “trade secrets,” by Samsung. Although when asked for an official comment, Samsung told the news agency that it had never “intentionally” blocked information from workers. However, further investigation into documents from courts and the labour ministry revealed that Samsung had asked the South Korean government not to disclose information on chemical exposure. A letter addressed to regulators, signed by the company’s CEO, states, “it is feared that the technology gap with rivals at home and overseas would be reduced and our company's competitiveness would be lowered. For that reason they are trade secrets that we treat strictly as secrets, we request not to disclose.”

Samsung is the largest company in South Korea, with more than 100,000 employees. Information on hazardous working conditions have so far been hidden from 10 factory workers.