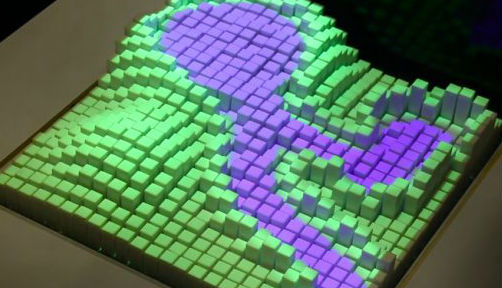 MIT’s Tangible Media Group has invented a new shape-shifting display named ‘Materiable’ that lets us see and touch physical simulations. This allows users to interact with materials and visualise them. The project demonstrates an interaction technique that represents properties of deformable materials.

The Tangible Media Group has been toying with shape-shifting projects for several years. In 2013, they created InForm, the telepresence interface. At present, we interact with a computer through GUI (graphic user interface), while InForm and its successors provide TUI (tactile user interface).

The substance is made using motor-driven blocks, called ‘pixels’, that respond to touch and return haptic feedback. The blocks which are arranged in arrayed groups of 24x24 are capable of moving on their own to mimic liquids and solid materials. It differs significantly from InForm from the fact that users can now push the block with any part of their bodies. The blocks push back with varying force, depending on the material simulated.

Materiable integrates multi-modal sensation of haptics and builds a perspective model of demonstrating properties of deformable materials. The users can identify three deformable material properties namely flexibility, elasticity and viscosity through direct touch interaction. In their video released this Sunday, May 8, Tangible Media Group have stated, ‘Our research shows that shape-changing interfaces can go beyond simply displaying shape allowing rich embodied interaction and perceptions of rendered materials with the hands and body’.