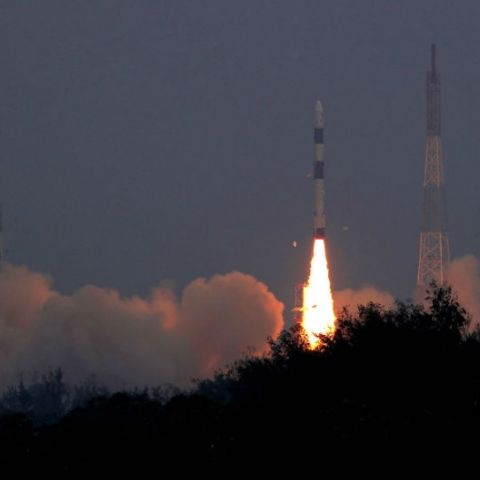 ISRO has successfully deployed the 380 kg Hyper spectral Imaging Satellite (HysIS) earth imaging satellite with its "workhorse" rocket, the Polar Satellite Launch Vehicle. The mission, designated PSLV-C43 was launched from the first launch pad (FLP) at the Satish Dhawan Space Cenre (SDSC) at ISRO's launch complex in Sriharikota. The rocket achieved lift off at 5:58 am on Thursday, 29 November 2018 after a 28 hour countdown. It was a textbook launch with all 31 satellites on board separating from the launch vehicle within 2 hours. The rocket was flown in the "core alone" configuration, without the six additional strap on boosters, known as the "XL" configuration. The core alone version is the lightest that the PSLV can get, and the PSLV-43 mission is the thirteenth flight of the rocket in this configuration. The primary payload, HysIS is a multispectral Earth observation (EO) satellite, and was injected into a polar sun synchronous orbit (SSO) at an altitude of 636 km. 30 co-passenger satellites from 8 countries piggybacked on the ride, and were also placed into orbit.

The launch vehicle used alternating solid and liquid propellants for each of its stages. About a thousand seconds into the flight, the fourth stage engine was cut off. The HysIS satellite was separated at this point, after which the rocket coasted at an altitude of 640 km. The fourth stage was then fired twice, with another engine cutoff in between. During the course of this maneuver, the altitude of the rocket was lowered to 504 km. 6500 seconds into the flight, the first co-passenger satellite separated. All the remaining satellites were deployed over the next 200 seconds. Over the duration of the flight, the PSLV reached a peak inertial velocity of 7609 m/s.

The HysIS satellite has two imaging instruments on board. The two instruments will observe the earth in the Visible Near Infrared (VNIR) and the Shortwave Infrared (SWIR) portions of the electromagnetic spectrum. Commercial, off the shelf VNIR sensors from a commercial foreign customer did not meet the requirements of ISRO in terms of charge handling capacity, signal to noise ratio and pixel size. For this reason, the space agency went ahead to produce its own VNIR sensor. The Space Applications Center (SAC) in Ahmedabad collaborated with the Chandigarh based Semi Conductor Limited (SCL) to indigenously develop the Charge Coupled Device (CCD) for the VNIR sensor. 4

There are two solar panels that fold out in space to power the satellite. The instruments draw 730 W of power, through a 64 Ah luithium-ion battery on board. The imaging instruments have a resolution of 30 m and a swath of 30 km. The spacecraft uses ISRO's Mini Satellite-2 (IMS-2) platform, which consists of a mainframe bus, a payload integration module, surrounded by four titanium pads. HySIS will provide global coverage, and will supplement the data captured by existing hyperspectral imaging satellites. The data captured by HysIS will have applications in agriculture, forestry, geology, coastal zones and inland waters.The satellite has a planned mission duration of five years.

There were 29 nanosatellites and 1 microsatellites sharing the ride with HysIS. The satellites were mostly meant for earth observation or Internet of Things (IoT) services. The Centauri from Australia, Kepler from Canada, HIUBER-2 from Netherlands, HSAT-1 from USA are all meant for remote IoT services. The FACSAT from Colombia, the Reaktor Hello World from Finland, the InnoSAT-2 from Malaysia, the Global-1 and CICERO 8 from USA were the earth observation satellites. The purpose of 3Cat-1 is to test how various technologies behave in the harsh environment of space. There are experimental solar panels, a wireless charger, a camera and a graphene transister on the 3Cat-1.

The thirty satellites, apart from the primary payload, together weighed 261.5 kg. All these 30 satellites were deployed at an altitude of 504 km. The co-passenger satellites for international clients that piggybacked on the ride, were all contracted through Antrix Corporation, the commercial wing of ISRO.