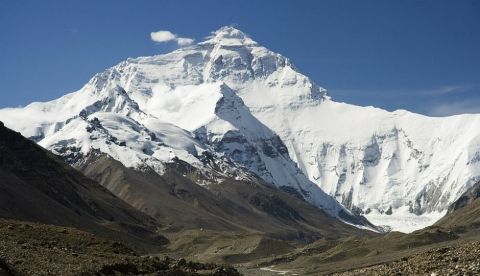 Global warming is a real and pressing issue that is considered to be the main reason for an array of problems ranging from melting glaciers, to increased average temperatures around the globe. Now, a new study by the International Centre for Integrated Mountain Development (ICIMOD) says that at least a third of the ice in the Hindu Kush Himalaya (HKH) region could thaw by the end of this century, even if the Paris Agreement goal of limiting global warming to 1.5 degrees by the end of the century is met. In case the global climate control efforts fail, the study warns that at the current emission rates, around five degrees of warming and a loss of two-thirds of the region’s glaciers would be observed by 2100.

The new report takes into account some previous studies that predicted a reduction of glacier volume in the HKH region between 45 to 90 percent by the end of this century. The KHK area consists of the world's highest peaks, Mount Everest and K2, and fresh water from this region flows into ten major river basins, contributing to irrigation, drinking water, and energy requirements of around 1.9 billion people. If the changes to the melting of glaciers are of unexpected magnitude and in a lesser amount of time, it could lead to a sudden flood in the regions where water from them flows to.

“This is the climate crisis you haven’t heard of,” said Philippus Wester of the International Centre for Integrated Mountain Development (ICIMOD), who led the report. “Global warming is on track to transform the frigid, glacier-covered mountain peaks of the HKH cutting across eight countries to bare rocks in a little less than a century. Impacts on people in the region, already one of the world’s most fragile and hazard-prone mountain regions, will range from worsened air pollution to an increase in extreme weather events. But it’s the projected reductions in pre-monsoon river flows and changes in the monsoon that will hit hardest, throwing urban water systems and food and energy production off kilter.”

The Hindu Kush Himalayan Assessment is said to include insights by over 350 researchers and was worked upon by 210 for coming up with an understanding of the region that affects China, India, Myanmar, Nepal, Afghanistan, Pakistan, Bangladesh and Bhutan.