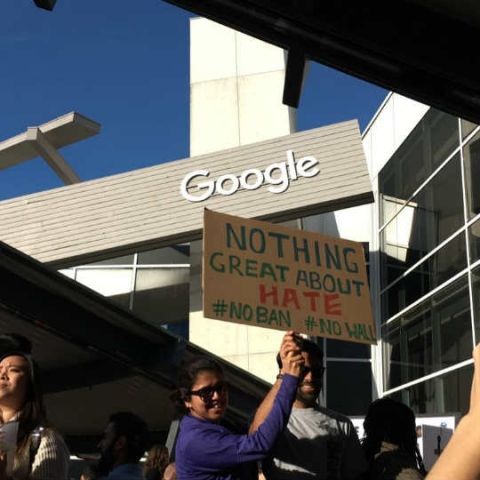 Google CEO, Sundar Pichai, along with Co-Founder, Sergey Brin were amongst the people who spoke at the rally in the company’s headquarters

Google employees across multiple cities have held rallies protesting President Trump’s decision to ban refugees and immigrants coming into the US from seven countries. Google was amongst the first tech companies to react to the ban and the company’s immigrant CEO, Sundar Pichai has said that the ban would affect at least 187 employees.

Pichai, along with the company’s founder, Sergey Brin were amongst the people who spoke at the rally at the company’s headquarters. “The fight will continue,” said Pichai at the rally. Brin recalled how he and his family were refugees who fled from the USSR to the US. He notes that even though the two countries were in the midst of the Cold War, the US had the “courage” to take his family in. Other people said to have spoken at the rallies were employees who were personally affected by the ban.

Google isn’t the only company which has spoken out against the immigration ban. Apple CEO, Tim Cook said that “it’s not a policy we support,” while Netflix CEO, Reed Hastings said, “Trump's actions are hurting Netflix employees around the world, and are so un-American it pains us all.” Other companies to have spoken against the ban include Microsoft, Tesla, Lyft, Airbnb and Uber.

Sergey Brin and Sundar Pichai speaking at the No Ban No Wall rally at the Google Headquarters #Google #GooglersUnite pic.twitter.com/YdSol3cWNQ

Proud, moved, and touched to be at a company that boldly stands for its people #GooglersUnite pic.twitter.com/ayJSMuyQvs

So proud that I work for @Google right now. Fight the Muslim Ban. #googlersunite pic.twitter.com/U9uQ69FZV1