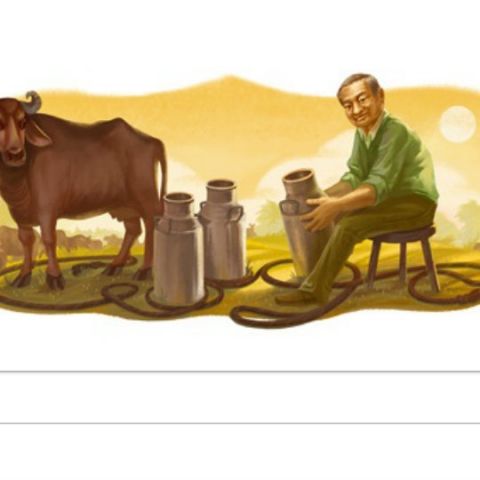 Today's Google Doodle has been dedicated to the memory of India's original Milkman- Varghese Kurien. It is Kurien's 94th birthday today and the Doodle on the search engine's home page shows Kurien sitting next to a buffalo, holding a milk container. The rope underneath his feat is shown laid out in a way that it spells Google.  Kurien is fondly known as the 'father of the white revolution', as he founded many institutions such as Amul and GCMMF (Gujarat Co-operative Milk Marketing Federation). Kurien was responsible for the success of Amul as one of India's largest dairy product's brand. He was also appointed as the Chairman of the National Dairy Development Board in 1965, by then Prime Minister, Lal Bahadur Shastri.  The credit for transforming India from a milk deficient nation to the world's largest milk producing country can also be attributed to the farmer development programmes initiated by Kurien.

Fun fact is that Kurien, who changed the face of India as a milk producing nation, did not drink milk himself. The work of Varghese Kurien is also depicted in the Shyam Benegal movie, Manthan.  Interestingly enough, Manthan was a result of Amul's half million member farmers contributing Rs 2 each for the production of the movie, which went on to recieve the National Film Award for the best feature film in Hindi.

Varghese Kurien passed away on September 9, 2012, but his contributions towards lifting millions of farmers out of poverty will forever be remembered by all Indians.