“Today, we’re kicking off the year with a new look for Gmail on mobile, too. As part of the new design, you can quickly view attachments—like photos—without opening or scrolling through the conversation. It’s also easier to switch between personal and work accounts, so you can access all of your emails without breaking a sweat. And just like on the web, you’ll get big, red warnings to alert you when something looks phish-y,” Google said in a blogpost. 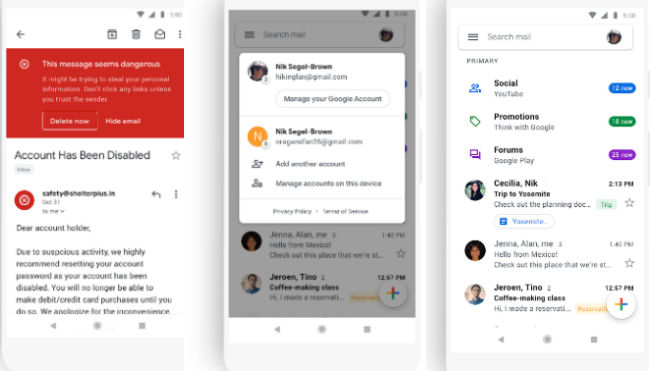 According to the company, this update is part of a larger effort “to make G Suite look and act like a family of products, designed in the Google Material Theme with ease-of-use in mind.” Notably, the company has already rolled out the update to the web experiences for Gmail, Drive, Calendar, and most recently Google Docs and Sites. Google also says that the Gmail on iOS will get this refresh “in the coming weeks,” and more G Suite mobile apps will get the design later this year.

The update to Gmail for Android brings features from the web app to the mobile app. Some of these features were previewed at the Google Cloud Next conference in San Francisco last year. Now, Android users can also take advantage of the machine learning-based Smart Compose feature on Gmail, or reply to messages quicker with suggested responses generated by Smart Reply. Users can also follow up on emails with reminders in the inbox as well.

We haven’t got the update till now, but as showcased by Google last year, Gmail’s thick red accents are gone. There is a search bar on the top that features the navigation drawer on the left and a profile avatar at the right. At the bottom-right is a new multi-colored Floating Action Button (FAB). The new inbox view also lists images, files, and other attachments for quick access. Most recently, Google brought the Chrome OS version 69 with Material Design.

Google Photos is the latest app to get Material Design