Giant dragon fights giant spider on the streets of Canada, as people cheer 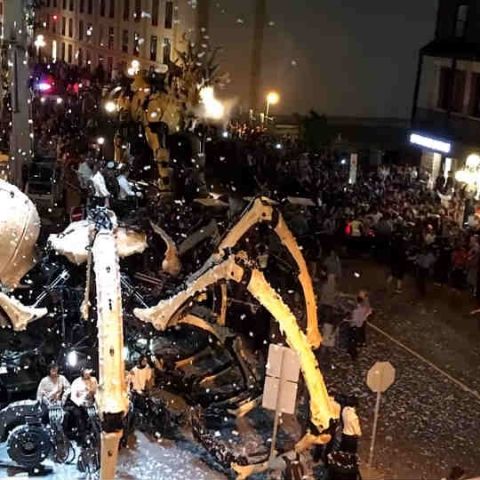 Remember Aragog from the Harry Potter series? Imagine the giant spider fighting one of Daenerys Targaryen’s dragons from Game of Thrones. Can’t imagine that? Maybe the video below will help. French street theatre company, La Machine, build two giant robots for a four-day public performance called “The Spirit of the Dragon Horse, With Stolen Wings”. The robots in question are named Long Ma and Kumo.

Long Ma is a 36 foot tall half dragon-half horse like creature, that weighs 45 tons. It can gallop, trot, run and even breathe fire. Kumo is the giant spider, which weighs 40 tons and can spray water. It takes 16 people to operate the spider and control its movements.

The two robots were seen on the streets of Ottawa, Canada, marking La Machine’s debut in North America. The two monsters battled thrice over the course of four days, with the final battle taking place in the Canadian War Museum. It’s not just any battle either. La Machine actually has a story to tell, it’s a street theatre company after all.

Speaking of giant robot battles. Remember that US vs Japan giant robot battle, announced back in 2015? Yeah, that’s happening in August this year. That’s this month, according to the announcement by the American Megabots team back in April. We’re excited for that too, and yes, our money’s still on Japan!