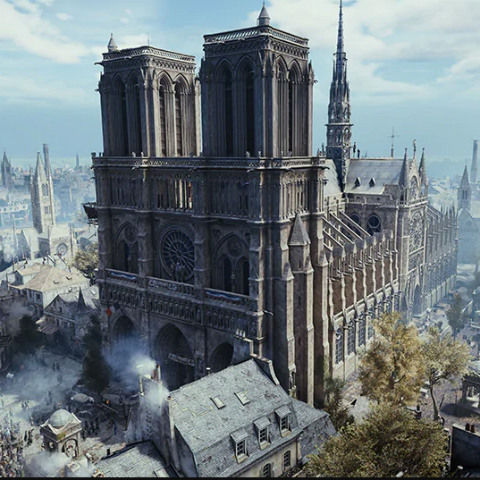 The game featured Notre-Dame as one of the notable locations. Ubisoft has also pledged to donate €500,000 (Rs 3.9 crore) to help restore the monument.

Ubisoft’s Assassin’s Creed Unity will be available free for PC on the Ubisoft Store for the next week. The game’s publisher has made the game free to play to highlight the Notre-Dame de Paris as it is one of the many prominent landmark in the title. Ubisoft is showing its support by donating €500,000 (Rs 3.9 crore) to help restore the monument that was ravaged by a fire this Monday. The company also encourages people to donate for rebuilding Notre-Dame. Assassin’s Creed Unity was launched back in 2014 and the title was set during the French Revolution. One of the major in-game event takes place at Notre-Dame Arno Dorian, the protagonist, assassinates the Templar Silvert.

“In light of Monday's events, we will be donating €500,000 to help with the restoration and reconstruction of the Cathedral. We encourage all of you who are interested to donate as well. In addition, we want to give everyone the chance to experience the majesty and beauty of Notre-Dame the best way we know how. For one week, we will be giving Assassin's Creed Unity away free on PC, for anyone who wants to enjoy it,“ announced Ubisoft. The Notre-Dame we’ve seen in the game was made by Caroline Miousse of Ubisoft Montreal. Back in 2014, Miousse said that the cathedral’s spire in-game was different from the one that was toppled by Monday’s fire.

In other PC gaming news, the AI based system OpenAI Five system secured win in two consecutive games against the world champion Dota 2 human team, OG. This is the first time an AI system bested pro-Dota 2 human players during a live stream. Additionally, during the matches, OpenAI team also demonstrated the OpenAI Five’s capability to play as a teammate to humans, which the team said it didn’t prepare for. The AI development team has also announced that it is retiring its OpenAI Five as a Dota 2 competitor.

OpenAI Five Arena will also be available for players who want to test their skills against the AI system. The OpenAI Five system will be scaled for accommodating players from around the world online from April 18 till April 21 and one will get to compete against or alongside the AI. You can read more about it here.