The new app was announced in May by Microsoft and is now available for testing with the latest Windows 10 Insider Preview Build 17728. 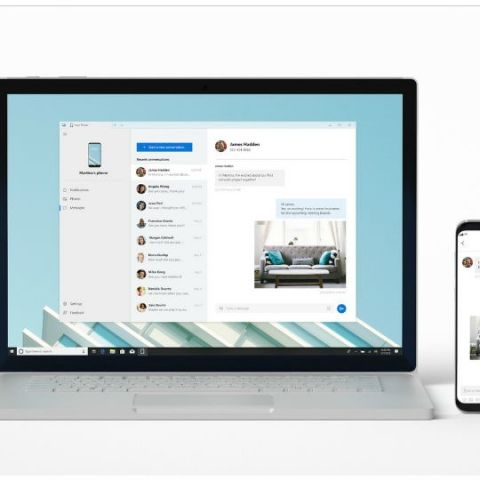 Microsoft has started testing its ‘Your Phone’ app, which will be available for all with the upcoming Redstone 5 Windows 10 update. The app was first announced at the company’s Build developer conference in May this year. It can mirror content from a phone to a PC and will allow Windows 10 users to access emails, messages, photos and other notification directly from their PCs. As per Microsoft's Windows Blog, the Your Phone app will be available for testing with the newly released Windows 10 Insider Preview Build 17728 (RS5) to Windows Insiders in the fast ring.

Some new functionalities will be made available on the app for Windows Insiders with an Android device. One will be able to capture an image using their phone and see it on their PC instantly. Additionally, the photos and notifications will also be mirrored to Windows 10 and one can simply drag and drop to copy images. Microsoft’s blog reads, “And rolling out in the coming weeks, Android users might also start to notice a desktop pin taking you directly to Your Phone app – for quicker access to your phone’s content. To light up this experience, open Your Phone app. You will receive an app from Microsoft which you must download to your mobile phone and follow the setup prompts. Android 7.0 and above are compatible with Your Phone app. For PCs tied to the China region, Your Phone app services will be enabled in the future.”

The same set of features are said to come on the iPhone for iOS users. However, it’s not clear yet if ‘Your Phone’ will come integrated in Windows 10 with the Redstone 5 update or one will have to install it as a separate app once it’s ready. There are other similar apps that push your phone’s notification to a PC like Pushbullet and Airdroid, however, a dedicated app from Microsoft means that one can expect better security and broader functionality.