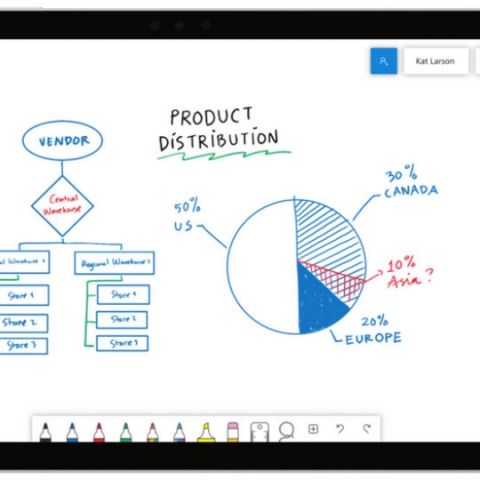 Microsoft has launched its collaborative Whiteboard app on Windows 10 and announced that the versions for iOS and the web will be available soon. The app has been in preview since December last year. Anyone with Windows 10 OS can download the app from Windows Store and use it. If you have purchased the Office 365 suite, log into the app with Office 365 account and you can collaborate with multiple people. Whiteboard lets users take notes, make tables, draw graphics and manipulate photos on a virtual whiteboard that can be shared across multiple devices in real time.

“Today we are pleased to announce the general availability of the Microsoft Whiteboard app for Windows 10. Whiteboard gives teams a freeform, intelligent canvas for real time ideation, creation, and collaboration. Since releasing a preview of the app in December, more than 200,000 customers have helped us fine tune the feature set and end user experience,” Microsoft posted in a blog. The company also says that the complete roll out on iOS and web “will mark an important milestone in its journey to make Whiteboard the best tool for freeform collaboration across platforms and form factors.”

Multiple people can simultaneously work on a single large touchscreen device or work together on their own devices from around the world simultaneously. The avatars on the canvas can help others keep a track of who is doing what. Since the work done on the Whiteboard app are saved automatically to the Microsoft cloud, users can take up from where they left off.

Since the Whiteboard app supports inking on Windows 10, Surface devices that have Surface Pen styluses can be used for works like collaborative inking, table shading, among others. The intelligent ink recognizes shapes and makes creating tables a snap. According to The Verge, the Whiteboard team is also working on an Android version and until the app on the platform is developed, the web version of Whiteboard will work on Android mobile devices. Interestingly, Microsoft has not restricted the app support to any particular browser.