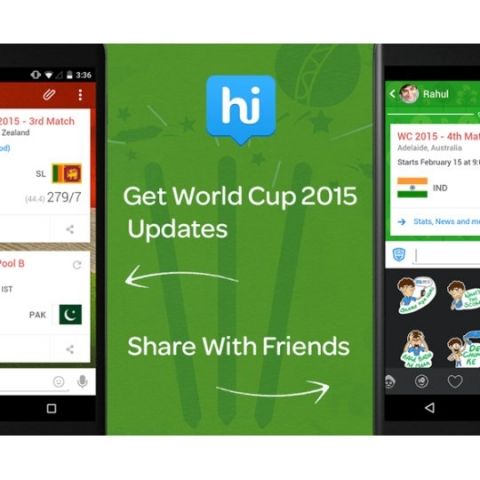 Hike messenger has teamed up with CricBuzz to launch 'World Cup 2015’ service on the application. For every android user on hike, a new chat window, called ‘World Cup 2015’, will appear in the users’ chat list, which will be active during the entire World Cup.

Hike’s android users will receive a card with real-time score updates and match results starting February 13, 2015. This chat will be active until March 31st and will contain content relevant to the latest match; post which the chat will disappear from all the users’ chat roster. In addition, hikers will also have access to view detailed scorecards and news from the World Cup, Points Tables and additional content, within Hike itself.

What makes this feature powerful in a social setting is that match scorecards can be shared with friends in one-to-one and group chats, leading to fun conversations around the tournament.

hike’s Android users can download the latest version of the app from Google Play store.

Pankaj Chhaparwal, CEO, CricBuzz, said, “Being a brand that is natively digital, we understand the importance of reaching out to the customers, on a medium they’re used to, in a format that is engaging. We’ve been doing a lot of things around building traction on CricBuzz and our content partnership with Hike takes it to the next level. Through hike, we’ll be touching over 35 million users. We’re excited to see how this takes off.”

Commenting on the launch, Kavin Mittal, Founder and CEO, hike messenger, said, “It is a known fact that our country is crazy about cricket. We’re excited to partner with CricBuzz to launch ‘World Cup 2015’ on hike that will allow tens of millions of hikers to enjoy real-time cricket scores & updates all through the World Cup. Like messaging, we’ve kept the experience quite simple and bite sized so that it feels absolutely effortless to consume cricket content, inside hike itself.”