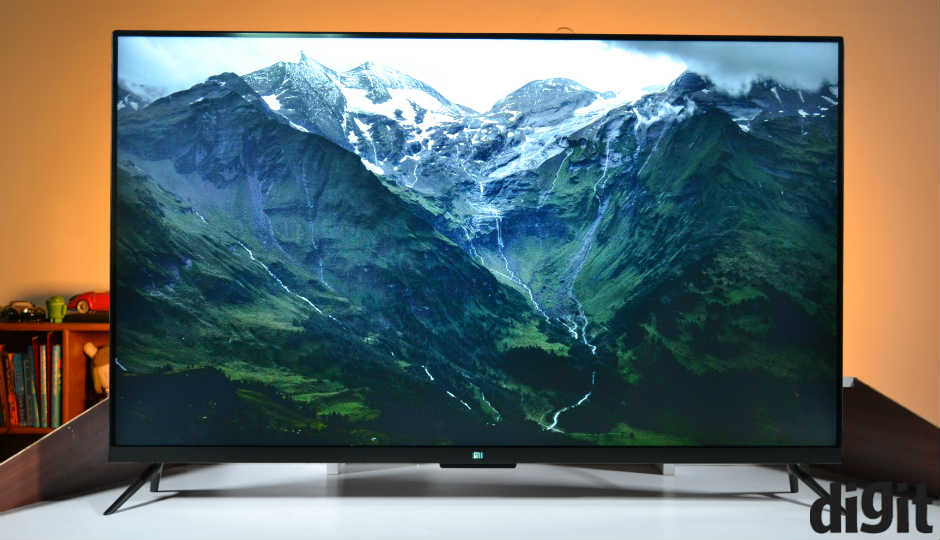 Xiaomi has captured the budget smartphone market and is now planning to make its mark in the TV segment with the launch of the Mi TV 4 in India. The TV is priced at Rs 39,999 and is really slim, measuring 4.9mm at its thinnest point and 38.9 at its thickest. The speakers are down-firing and the TV is edge lit (from the bottom) which is why it is so thin at the top and thicker at the bottom. Mi TV will be available exclusively via Flipkart, Mi.com and Mi Homes from February 22.

Apart from its slim form factor and minimalistic remote, the biggest highlight of the TV is its Patchwall OS. More on that in a bit. 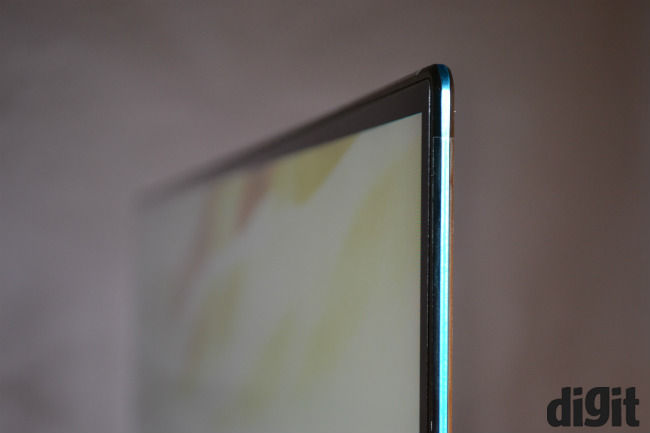 When it comes to connectivity, the TV has 3 HDMI ports (one of them is ARC), two USB ports (1x USB 3 and 1 x USB 2), an Ethernet port, AV input and good old antenna connection as well. The TV only has an S/PDIF port for audio output which is a bummer. It has HDMI ARC too but I have a pair of speakers that support 3.5mm or RCA and I can’t connect them to the TV which is disapointing. You will have to invest in a Coaxial Digital Adapter Cable. If you have a pair of speakers that support Bluetooth, then you can connect them to the TV via Bluetooth. 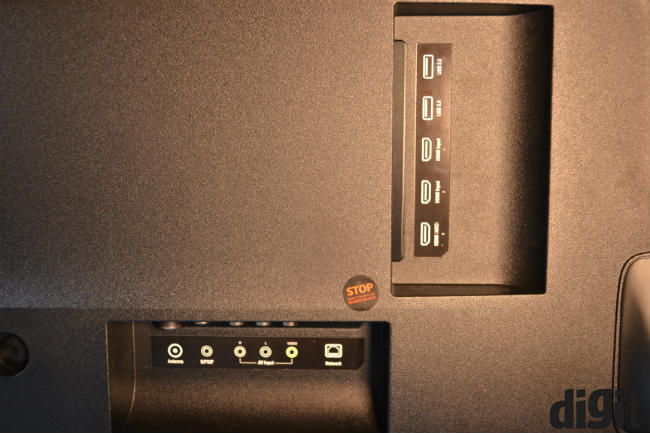 The Mi TV 4 supports 4K resolution and HDR10 and the company says that since more content is produced in HDR10 than Dolby Vision, it will continue to support HDR10. We played some 4K content on Netflix via an Xbox One X attached to the TV, and for the most part, it looked good. The panel on the TV is quite reflective though. Using the Xbox One X we confirmed that the TV indeed does support 4K at 60Hz which is very good. Although in our initial testing we weren't very happy with the details in the black levels of the TV.

Coming to the audio, the TV has down-firing speakers and the overall audio output from the speakers is underwhelming.

We will reserve our final judgment on the picture quality and audio for our review.

Patchwall: The new TV OS on the block

Coming to Patchwall, this is where things get very interesting. Xiaomi has worked towards redefining the smart TV UI. The biggest deal is that content isn’t divided into apps such as Netflix, Hotstar, Hungama, Voot, etc as it currently is on Android TVs or a WebOS TVs. Rather, the content is center stage and the app is in the background. Confused? Let me explain. When you switch on the TV, you will be greeted by a host of content and not apps. So, you will see a bunch of movies and TV shows that you can start watching irrespective of the source. So, for example, if the content in front of you is The Dark Knight, and you click on it, it will either start playing on the Hungama app or start playing on a channel on your DTH box (if the movie is playing at that point in time). This is similar to what Apple has done with the tvOS on the new Apple TV. The biggest difference in tvOS is that the Apple TV relies on being online all the time for its content whereas the Mi TV 4 is focused on a country like India where TV viewing is still largely offline through cable boxes or DTH service providers. The UI will pick up the channel guide from your cable box or DTH box and integrate it into the Patchwall UI. So, you don’t need to resort to the program guide of your DTH box to know what is playing on which channel at what time. We haven't been able to test this feature yet, but we will analyze it in detail soon. 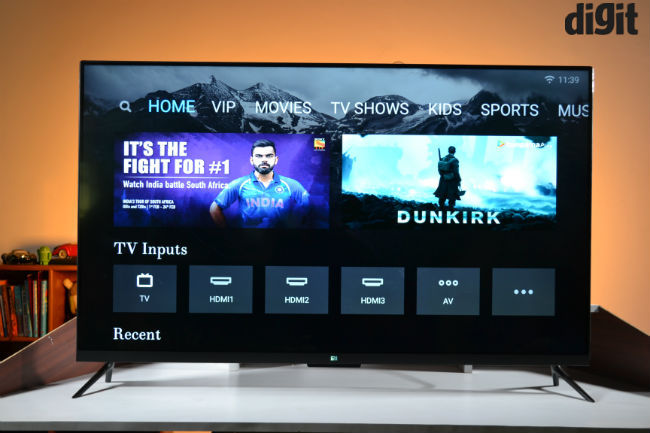 The TV doesn’t come with a subscription to the online content sources such as Hungama or Voot or any other paid subscription that’s available on the TV. If you want to watch content on Hungama and that content isn’t a part of the free library, then you will have to get a subscription to watch it.

Sadly, Netflix isn’t a part of the service providers that Xiaomi has partnered with and side loading the Netflix app won’t help either.

Search is very interesting on the Mi TV 4. If you search for “Dark Shadow” for example and the movie is available on any of the services that Xiaomi has tied up with, it will appear in search. When you click the movie, it will start playing. You don’t need to open the specific service provider app or go to the particular app's login. It’s quite the seamless especially if you are subscribed to the services on Xiaomi’s offer. 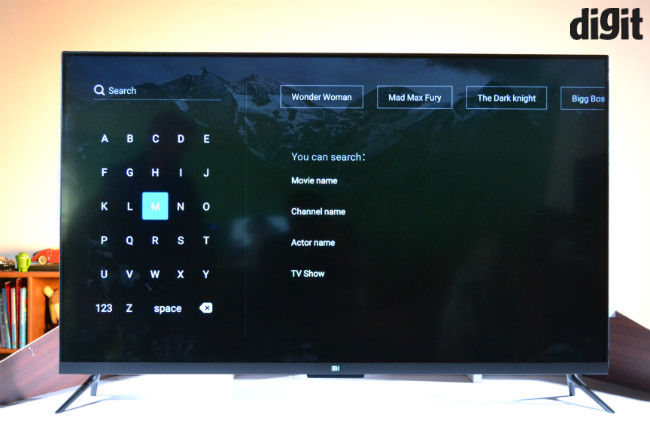 As of writing this story, only Sony, Hungama and Voot are active on the TV but Xiaomi says that there are more services that will be active soon. Users will not need to do anything to implement the services (apart from subscribing to them). As long as the TV is connected to the internet, the update will happen automatically. The sad news is that Netflix and Jio TV are not part of the 8 to 10 services that will be active soon. 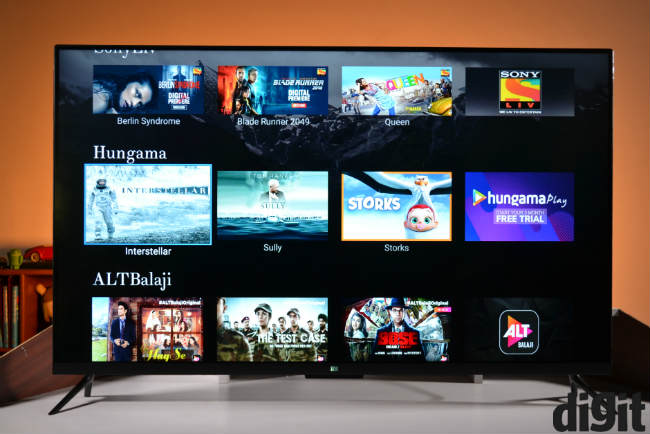 The services will be available in 15 languages overall - 14 Indian languages + English.

Based on your viewing habits, the TV will throw up recommendations. If you watch action movies, expect recommendations of action movies. The only downside is that the TV does not have profiles. So, if mom likes to watch soppy TV shows, expect the recommendations to reflect in the UI too. Xiaomi says that it is working on profiles and they should be live in the near future.

Runs on Android but no Google Play Store

The Patchwall OS may be based on Android but it doesn’t support the official YouTube app or the Google Play Store. The only way to get apps on the device is to sideload them. Xiaomi understands that sideloading an app may be difficult for the average consumer so they are working on a unique solution. Download the app on your Xiaomi smartphone and if the smartphone and TV are on the same Wi-Fi, the app will reflect on the TV. This is a pretty cool feature and I’m looking forward to seeing it in action. Remember, this feature won't be active at launch. It is something Xiaomi is working on and we will bring you more details on it as soon as the feature is ready. Since you will need a Xiomi phone to make the most of these services in the future, it is possible that this is Xiaomi’s way of pushing its own ecosystem to the consumer. This isn't new as we have seen Apple do this with its products. 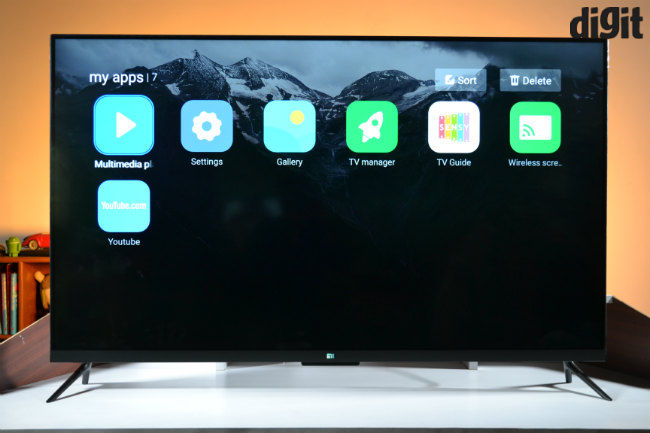 You can mirror your Xiaomi smartphone on the TV via Miracast, but the experience is lackluster as of now. There is a lot of lag when mirroring the display of the smartphone. We also tried to play a YouTube video via Miracast and the video playback was choppy. Again, we will try the feature out a lot more and give you our final verdict in the review.

Taking inspiration from the Fire TV stick remote control and the Apple TV remote control, the Mi TV 4 brings a minimalistic remote control that gets the job done. On the top left corner, we have the power button below which rests the directional buttons with the select button. You also have the home, back, and menu buttons along with the volume rocker. 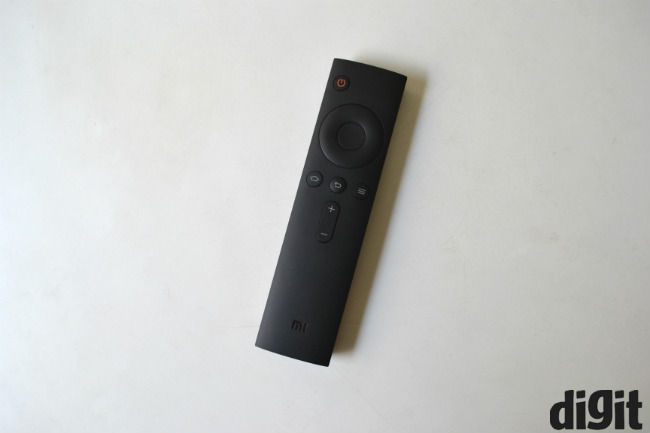 When you purchase the TV, you get a cable that connects your set-top box to the TV. This means that you can control the content of the set-top box from the comfort of the Mi TV remote control and reduce the clutter of remotes that are a part of your home entertainment system. You can also control the function of the TV via an app on your smartphone.

Seeing that the Mi TV 4’s UI integrates the set-top box’s content it’s nice to see that everything will be in one place.

Overall, the Xiaomi Mi TV 4 is packed with features and we are still digging and getting used to the UI. An interesting thing that Xiaomi has emphasised on is the fact that they will not just launch this TV and forget about it. The company will work on improving the services and features on offer via updates and we would like to see the performance and evolution of the services on the Mi TV 4 in the coming days.

Android 13 has rolled out with new features for Pixel devices
Vivo V25 5G key specifications revealed in unboxing video ahead of August 25 launch in India
Samsung Galaxy Z Flip 4 price in India is ₹90,000 and Z Fold 4 price is ₹1.55 lakh
Xiaomi 12T, 12T Pro prices leak: Here’s everything we know about the phones
Oppo rumoured to launch new foldable and flip smartphones by the end of 2022
Advertisements